How The Moon Was Formed 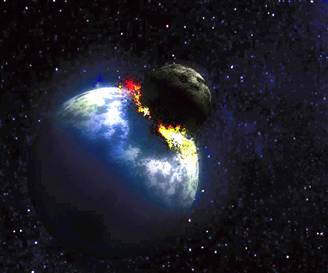 Today I found out that the moon isn’t as old as the Earth and was formed approximately 30–50 million years after the Solar System based on what is called ‘the giant impact theory’.

Although no one can say for sure exactly how our moon came to be, there a few hypothesis and theories of which the ‘the giant impact theory’ is the most compelling and widely accepted. In this theory, the Earth had no moon until it was struck by a rogue planet which instantly vaporized. The impact is said to have created a cloud that reached roughly 13,700 miles or 22,000 kilometers high, where it condensed into solid particles that orbited the Earth.  Over time they aggregated into larger moonlets, which eventually combined to form the moon we know today.

This theory is supported by quite a bit of evidence such as: even though the Earth has a large iron core and the moon does not, the moon has exactly the same oxygen isotope composition as the Earth, unlike other planets formed in other parts of the Solar System. This indicates the moon should have been formed from material in Earth’s neighborhood. Another significant piece of evidence comes from the oldest record of Earth’s ocean tides ever found, which were 3.2-billion-year-old rocks from South Africa. Pinstriped circular sand-and-silt layers in the rocks were deposited by daily, fortnightly and monthly tidal cycles. If the moon formed elsewhere, then was captured intact by Earth’s gravity as some theories state, the moon’s orbit would have been extremely elliptical and tidal rock layers would not have shown such normal cycles.

Computer simulations modeling a giant impact are consistent with measurements of the angular momentum of the Earth–Moon system, and the small size of the lunar core. They also show that most of the Moon came from the impactor planet and not from Earth. The post-impact mixing of the vaporized material between the forming Earth and Moon could have equalized their isotopic compositions, but this again is just speculation.