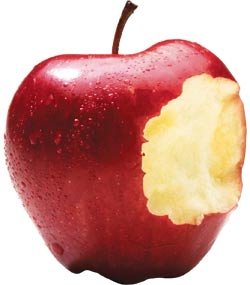 The origins of this term go all the way back to the Biblical event where Eve gave Adam a forbidden fruit, which is commonly misrepresented as an apple.  The term then basically comes from the legend that when he ate of the “apple”, the piece got stuck in his throat and made a lump.

Now, of course, according to the Bible story, it wasn’t an apple Adam and Eve ate of, it was a fruit from the Tree of the Knowledge of Good and Evil, of which there was apparently only one.  Besides the obvious fact that I don’t know anyone who’s felt particularly more knowledgeable in the ways of good and evil when they ate an apple, an apple tree is not self pollinating; so you’d need more than one to have it produce more of itself, which pretty firmly kills the whole “apple tree” theory.

To make the origins of the term even more ridiculous, even if it was an apple and it got stuck in his throat, his children wouldn’t somehow miraculously also have apples stuck in their throats.  This is about as absurd as the age old “Well if Adam had a rib taken out to make Eve, why aren’t men missing a rib?” Or the equally ludicrous corresponding claim by many that men are somehow missing a rib.  Both sides of the argument seem to have suspended all logic while arguing over this triviality.  The real irony here is the “rib” translation was actually a mistranslation.  For more on that, see the Bonus Factoids.

So this all begs the question, why do most people think the Bible says Adam and Eve ate an apple to get them tossed out of the Garden of Eden?  Why not an orange or a peach or why not just call it like it is stated in the Bible story?   Well, Aquila Ponticus, who was a second century translator translating the Old Testament from Hebrew to Greek, took the liberty of translating it as an apple tree, even though the original text doesn’t say that.  It’s likely that he chose this due to the fact that he was translating it into Greek for Greeks and that in Greek mythology apples were seen as symbols of desire and destruction.