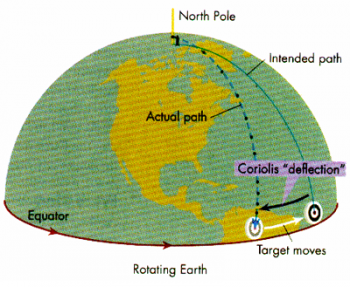 Today I found out what hemisphere you are in does not affect the way water spins down your drain.

So why do some textbooks, most tour guides, and pretty much all TV shows like The Simpsons get it wrong?  The myth that water in your drain will spin differently depending on what hemisphere you are in primarily stems from taking a very real physical precept, namely the Coriolis Effect, and applying it to a situation that it doesn’t make sense with.

The Coriolis Effect, named after Fustav Gaspard de Coriolis (1792-1843) who published a paper in 1835 on the subject, is basically an apparent force relative to the Earth’s surface that causes objects to appear as if they are moving in somewhat of a curved path. What’s actually happening is they are moving straight and it is the Earth turning that makes it look like they are curving.  So more practically, it causes apparent deflection of moving objects to the right in the Northern Hemisphere; to the Left in the Southern Hemisphere; and no apparent deflection on the equator. 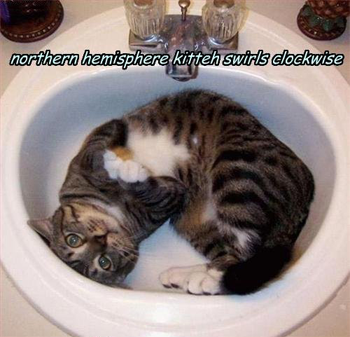 So it seems reasonable enough to think that the Coriolis Effect would affect the way the water spins down the drain.  Indeed, things such as hurricanes and other large cyclonic systems are very much affected by the Coriolis Effect in terms of which way they spin.    However, a hurricane might literally be 500 miles in diameter and last for many days;  your sink or toilet is very small in comparison and the time the Coriolis Effect has to influence the draining water is very small as well.  In fact, when we are talking draining sinks, toilets, and bathtubs, the size and time scale is so small that the Coriolis Effect force is practically non-existent in terms of effecting the water in any way, especially when compared to the other forces in play here like the shape of the sink, the way the jets are pointed in the toilet, and things of this nature.

In this case, the Coriolis Effect has about the same affect on the swirling water in your toilet as a butterfly’s wings flapping have on a Tornado.