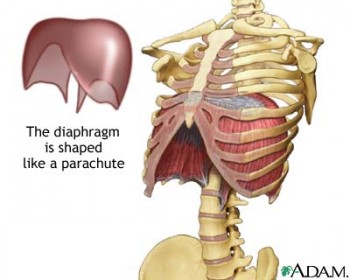 Today I found out what causes the pain in your side you may occasionally feel while running or doing other jarring activities.

This pain, known often as “side stitch” and more technically as “exercise related transient abdominal pain” (ETAP), often occurs while running, swimming, and horse riding, among others; it is caused by various stresses on your diaphragm that result in strain on the ligaments connected to your diaphragm, as well as spasms or cramps in the diaphragm itself.  These strained ligaments and cramps in turn cause the sharp pain you feel in your side.

So what’s actually going on here?  When you inhale, your diaphragm goes downward and contracts, when you exhale, your diaphragm rises and relaxes.  Now consider what’s happening when you run, for instance.  You are bouncing up and down while in turn breathing in and out.  It turns out that most people naturally time their exhale with one of their feet striking the ground.  When their foot strikes the ground, their organs are going down while their diaphragm is going up.  This puts quite a bit of strain on the ligaments that are connected between the diaphragm and the various organs connected to it, such as your liver and stomach.  Over time, this can cause pain due to strain on the ligaments and can also contribute to spasms in the diaphragm itself.

Further complicating this latter issue of spasms is that, while this is all going on, your diaphragm will typically be getting less oxygen than normal, particularly for people who are out of shape.  This has a twofold affect.  First, muscles, such as the diaphragm, that are starved for oxygen will have a tendency to cramp more easily.  The second effect is that, when you are out of breath, you will typically take shallow, quick breaths.  When this is happening, your diaphragm is never really getting a chance to relax fully, rather staying somewhat flexed.  This further exacerbates the problem with your ligaments, while also further starving the diaphragm of oxygen from constant flexing.

Now that you know what causes side stitches, here are some great ways to prevent and get rid of them when they happen: