How to Hack an Alarm Clock 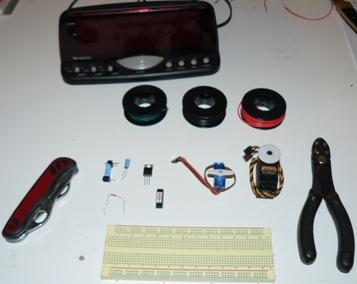 Today I found out how to hack an alarm clock to do really cool things.

(note: This is a Sponsored Post written by me on behalf of Swiss Army Knives . All opinions however are 100% mine.  If you are interested in picking up the Swiss Army Knife used in this article, you can do so here: Dual Pro X)

If you’re anything like me, the sound of your alarm clock rates somewhere between nails on a chalkboard and a Vuvuzela blown incessantly during the World Cup.  This is primarily because the alarm clock basically is designed to rip you from your peaceful slumber and more often than not, force you to get out of a warm comfortable bed and step into an inevitably chilly room.  Now, having to get up at a certain time is something that most of us can’t really get around.  But I set about thinking about how I could accomplish this without being ripped suddenly from perhaps a deep sleep.  Basically, I wanted an alarm clock that would wake me up more naturally.

In my case, I wanted it to flip on my heater and light (and a future add-on, open my blackout blinds) about 15 minutes before I actually wanted the alarm clock buzzer to go off.  The light then will help my body wake up more naturally and the heat will make my bedroom nice and toasty for when I’m ready to get up.  Then, when it’s finally time for me to actually wake up 15 or so minutes later, if I haven’t woken up and turned off my alarm yet, my alarm buzzer will actually go off to finish the process of waking me up.  In this way, by the time my alarm clock buzzer goes off, my body will have already started waking itself up more naturally in response to the light and heat.

*warning: probably doesn’t need to be said, but be sure and unplug your alarm clock before taking it apart lest you electrocute yourself. 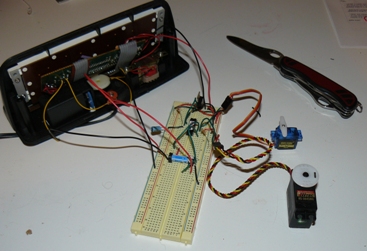 Now from here, we have a nice base to work with where we can detect with a microcontroller if the alarm is going off or not and also have the ability to flip on or off the buzzer with the microcontroller and the relay.

Rather than listing the rest of the steps involved in putting together my particular circuit, I will just leave you with some pictures of the circuit and a circuit diagram; so if you’d like to make this exact circuit yourself, you can.  I have also included my code which is written in Basic and hopefully documented well enough that it should make sense to anyone who wants to take a look at it or modify it for their own particular uses.

How to Strip Wire With a Knife: 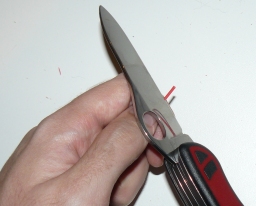 If you’re going to use a knife to strip a wire and have never done so before, it’s really easy and fast.  The basic method I use is as follows.  First, I cut into the wire insulation until I feel the knife scrape against the metal a little.  Now angle the knife so you won’t be cutting into the wire and strip the insulation off that side of the wire.  The basic idea here is very similar to how you’d peel a carrot or potato.

Now, you could continue this on the other sides, but I’ve found this is not typically necessary.  Having exposed one side of the wire, go to the opposite side and cut into the wire until you again have cut through the insulation. 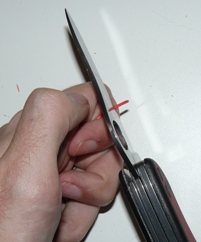 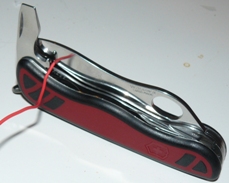 Using it is fairly simple, you basically want to open the tool half way (it should lock half way for this purpose), then open an adjacent blade a little.  Place the wire in the notch and apply some pressure with the blade, then pull the wire.  The wire seems to strip great every time, but as I said, I still prefer the knife method.