Are Sugar Rushes and Associated Hyperactivity Actually a Thing 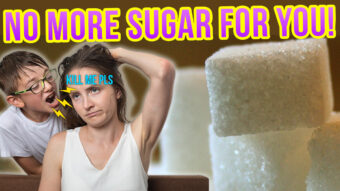 It is a classic parenting nightmare: you drop your tiny tot off at the grandparents’ or a friend’s birthday party, hoping to get a few hours’ reprieve from tending to their every shrill, snot-nosed demand. But alas, your plan backfires, for when you return to pick them up you discover that their hosts have filled them up with enough sugary treats to put an elephant in a diabetic coma. Coursing through their tiny veins, the sweet, sticky stuff gives them the manic energy of a hundred Gary Buseys, causing them to scream and shout and bounce off the walls like a cocaine-fuelled howler monkey – and you to start seriously questioning your decision to bring new life into this world.

At this point, you parents in the audience are probably furiously nodding your heads, having experienced this exact scenario many times. Only no… you haven’t. Not really. For while the dreaded “sugar rush” might be a staple of parenting lore and humour, this phenomenon is in fact nothing more than a persistent medical myth. Believe it or not, eating excessive amounts of sugar does not cause people to become hyperactive – not even children. In fact, it has exactly the opposite effect. “But Simon!” I hear you cry. “Of course sugar makes children hyperactive! I’ve seen it with my own eyes!” Well, please put down your torches, pitchforks, and phones set to speed-dial the neighbourhood watch, and join us as we delve into the science of sugar, energy, mood, and what’s actually going on here.

At first glance, the idea of the “sugar rush” makes perfect sense. After all, our bodies need sugar to produce energy; it follows, then, that more sugar should produce more energy. But decades of scientific research have thoroughly debunked this seemingly straightforward assumption. In a 2019 meta-study conducted by Berlin’s Humboldt University, Lancaster University, and the University of Warwick, researchers analyzed the data from 31 trials examining the short-term psychological effects of consuming large amounts of carbohydrates – including sugar – on healthy adults. The analysis examined various psychological parameters including alertness, alertness, depression, calmness, fatigue, confusion, tension, and anger at intervals of 0-30, 31-60, and 60+ minutes following carbohydrate ingestion. Contrary to popular expectation, the researchers found no significant change in the subjects’ mood due to high sugar consumption. They also found that high sugar consumption did not impart greater energy:

“In fact, [sugar] consumption was related to decreased alertness and higher levels of fatigue within the first hour post-ingestion.”

This may seem counter-intuitive, but from a biological standpoint it makes perfect sense. While sugar can indeed give you an energy boost, this only works if you are already suffering from hypoglycaemia or low blood sugar. If your blood sugar is normal, consuming more sugar or other carbohydrates will not give you more energy. Instead, your body stores the excess energy by converting into fat – process which in turn consumes a large amount of energy requires energy, leading to the increased fatigue associated with eating a heavy meal – AKA the so-called “food coma.”

“But Simon,” I hear you protest. “The 2019 study was conducted on adults! Surely sugar affects children differently?” Nope! In 1994, a study conducted by Dr. Mark Wolraich and his colleagues from the University of Oklahoma examined 50 children whose parents claimed they were especially sensitive to sugar. Each subject was assigned a diet high in either sugar, aspartame, or saccharin, the parents being unaware what their child was consuming. Yet despite two-thirds of the children being given sweeteners with absolutely no caloric value, their parents still reported hyperactive behaviour after eating sweets. Whatever was causing the children’s bad behaviour, it wasn’t the sugar. So what, then, was to blame?

Another study published in 1994 hints at a probable cause. In this study, Daniel W. Hoover and Richard Milich of the University of Kentucky videotaped interactions between 35 mothers and their five-year-old children. Half the mothers were told that their child had consumed large amounts of sugar, while the others were told they had consumed no sugar at all. In fact, all the children had received a sugar-free placebo. Nonetheless, the videotapes revealed that mothers who believed their children had consumed sugar consistently rated their behaviour as more hyperactive. They were also more protective and critical of their children, reprimanding them more often. This suggests that sugar rushes are, in fact, something of a self-fulfilling prophecy. Because parents believe sugar causes hyperactivity, they parent their children poorly, triggering the very hyperactive behaviour they are trying to avoid. Researchers have also put forward other potential factors: for example, perhaps hyperactivity causes children to eat more sugar and not the other way around. Also, many environments associated with high energy play – such as birthday parties – are also associated with high sugar consumption. So what we have here is yet another example of that classic scientific sin: inferring causation from correlation.

But where did the notion of the sugar rush originally come from? Most sources trace the myth back to 1973, when allergist Dr. Benjamin Feingold published his eponymous Feingold Diet. Feingold advocated a diet free of salicylates, food colouring, and artificial flavourings, arguing that these additives had severe psychological effects and that eliminating them could help treat various childhood behavioural issues including hyperactivity. While Feingold didn’t call for the elimination of sugar specifically, parents soon came to distrust all food additives – especially processed sugar, which was becoming increasingly prevalent in all kinds of food products.

The notion that sugar causes behavioural problems got a boost in 1978 with the publication of a study in the journal Food and Cosmetics Toxicology, which examined 265 children described by their parents as hyperactive and unable to concentrate. The study found that many of these children suffered from abnormally low blood sugar levels, which – as we have already covered – is paradoxically associated with high sugar consumption. The myth of the sugar rush was born.

But it did not take long for this notion to be debunked. Subsequent studies have shown that, in fact, the 265 subjects of the 1978 study had blood sugar levels well within the normal range for children their age. As early as 1982, the National Institutes of Health debunked the sugar rush myth, while in 1995, a meta-study by Dr. Mark Wolraich published in the Journal of the American Medical Association examined the findings of 16 studies on sugar and behaviour and came to same overwhelming conclusion: sugar does not cause hyperactivity. In fact, so definitive were these results that a statistician who reviewed the study told Wolraich and his colleagues that he had never seen such consistently negative results in a statistical analysis.

So, in conclusion, everything you think you know about sugar and behaviour is dead wrong, as Dr. Wolraich neatly sums up in his 2019 paper:

“Interestingly, despite researchers not having reached a consensus regarding the exact effects of sugar on mood, it seems that the public strongly believes in the idea that sugar improves mood […] and increases activity levels (especially in children). Our findings indicate that sugary drinks or snacks do not provide a quick ‘fuel refill’ to make us feel more alert.”

Thus, while there are many reasons to be wary of your children consuming too much of the sweet stuff – including childhood obesity, Type 2 Diabetes, and other metabolic disorders – hyperactivity is not among them. So if your child is bouncing off the walls, you’ll have want to consider what other factors might be at play besides excess of sweets and soda. Maybe their environment is too stimulating – or not stimulating enough. Maybe they are acting out against unfair parenting. Or, at the end of the day, maybe they are just children, simply doing what children do.

Ever wonder why sugar doesn’t ever seem to spoil? Well, wonder no more!

In its crystal form bone dry, sucrose (C12H22O11) loves to bind with water (H20). When present in sufficient concentrations, table sugar will suck up all of the water around it. This is why sugar is an excellent food preservative. Via osmosis, the sugar pulls the available water from within the foodstuff, reducing the food’s aw, thus making it unsuitable for microbes to grow, or even survive.

Speaking of Cotton Candy, while it may seem like cotton candy, which, again, is made of pure sugar (sometimes with food coloring or other flavoring added), would be pretty much the worst thing in the world for you to eat,  it should be noted that it only takes about 30 grams of sugar to make a typical serving size of cotton candy, which is about 9 grams less than a 12 ounce can of Coke.  Further, cotton candy has no fat, no preservatives and is only about 115 calories per serving.  While certainly not a health food, nor filling in any way, there are numerous things people consume every day that are much worse for them health-wise.

Krisch, Joshua, There’s No Such Thing as Sugar Rush, According to Science, Fatherly, November 29, 2017, https://www.fatherly.com/health-science/theres-no-thing-sugar-rush-according-science

Wolraich, Mark et al, The Effect of Sugar on Behaviour or Cognition in Children: a Meta-Analysis, Journal of the American Medical Association, November 22, 1995, https://jamanetwork.com/journals/jama/article-abstract/391812