How Did the Practice of Calling Liberals Left and Conservatives Right Start? 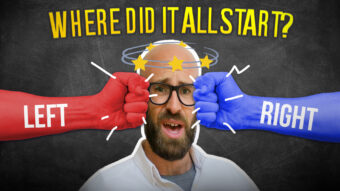 Depending on the country you live in, political opinion may be varied, or biased in one direction. In democratic countries, you obviously have the option to actually decide what direction your state should move towards via voting. And while a lot of political parties may opt for a safer middle ground usually more relatable for a wider demographic, there will always be the ones standing on, and for, the far right or far left.

But why do we call them that? It turns out the terms actually come with a rich history of their own and while they may mean different things in different countries and plenty of nuance on each side, a general classification comes from Scottish sociologist Robert Morrison MacIver, who in his 1947 treatise ‘The Web of Government’ classified things as such: “The right is always the party sector associated with the interests of the upper or dominant classes, the left the sector expressive of the lower economic or social classes, and the centre that of the middle classes. Historically this criterion seems acceptable. The conservative right has defended entrenched prerogatives, privileges and powers; the left has attacked them. The right has been more favorable to the aristocratic position, to the hierarchy of birth or of wealth; the left has fought for the equalization of advantage or of opportunity, for the claims of the less advantaged. Defence and attack have met, under democratic conditions, not in the name of class but in the name of principle; but the opposing principles have broadly corresponded to the interests of the different classes.”

Fascinatingly, despite seeming to be diametrically opposed on the surface, both sides of the political spectrum show manifestations of populism and may find a strong base in people belonging to each class of people from impoverished to rich.

In fact, there are proponents of the so-called ‘horseshoe theory’, which essentially says that the political far ‘left’ and far ‘right’ are, well, far closer to each other than they are to the ones traditionally holding the center. The reason for this is that the extremists on both sides tend to favour authoritarianism and totalitarianism.

In any event, this all brings us to the origin of the classifications “left” and ‘right-wing’ themselves. These lie in the French Revolution.

Rewinding to the turbulent years between 1789 and 1799, the French monarchy was, to oversimplify it, overthrown in favour of the common people’s plight.

With the king and all his friends now mostly having forcibly gone the way of their ancestors and therefore unable to voice any more opinions, a new system of government had to be implemented. This had to happen as quickly as possible, seeing as the alternative was a further descent into chaos, which was already pretty rampant in the region as is wont to happen when all the leaders get their heads lopped off suddenly and the mob takes control.

The ‘Ancient Régime’ or ‘Old Order’ played a quite vital role in this, as the general structure of legislative bodies was kept. Within it, from the Speaker’s point of view, who stood facing the assembly, it becomes clear where ‘left’ and ‘right’ comes from – it is simply the actual seating arrangement. Traditionally, as the more extremists on the two sides didn’t exactly like to co-mingle the aristocracy sat on the right while the commoners sat on the left and those more in the middle didn’t mind sitting closer. Naturally, within the National Assembly, being on the right came to mean supporting the king, while sitting on the left meant you were in favour of overthrowing him.

One member of this assembly, deputy Baron de Gauville summed up: “We began to recognize each other: those who were loyal to religion and the king took up positions to the right of the chair so as to avoid the shouts, oaths, and indecencies that enjoyed free rein in the opposing camp.”

These ‘commoners’ of the ‘opposing team’ were, however, not what we would understand of the term – people of more modest wealth and working regular jobs – but rather representatives of the richer capitalist class, the so-called ‘bourgeoisie’. Therefore originally, the ‘left’ was actually in favour of things like the free market and laissez-faire commerce. Within the parliaments, they also stood opposite those voicing their support for the aristocracy, the royals and their wishes, as well as the interests of the church. Unlike this original ‘right’, the ‘left’ wanted secularism, an increase of civil liberties, as well as republicanism.

Now all those we would actually call ‘commoners’ – the peasants, the working class, the unemployed – were not represented in this form of government really much at all, but it should be obvious that their ideals were in the general case in opposition to those of the aristocracy, therefore being ‘more left’ than the actual political left of the time. The bourgeoisie was still closer to what they wanted, and these early capitalists therefore the best allies they had.

So you can see how them gaining access to legislative bodies and the slow, but inevitable utter ousting of the aristocracy would shift the political spectrum towards capitalists being on the right.

Fast-forwarding a bit in history, to a time after 1848 – the parties used red and white flags as identifying symbols – and here is the origin of calling left-wing parties “the reds” (not to be confused with the phrase “raising red flags” which was a warning for floods).

The terminology of ‘left’ and ‘right’ was first used as a slur by the respective opposite parties and it was only in the early 20th century that these classifiers took over fully. Additionally, at first, political right-wing parties rejected the terms, as they did not wish to promote further disunity among citizens, while the ones on the left thought this was necessary in order to affect societal change. (Marx proclaimed a battle of the classes….And of course he needed classes for this theories to work!)

In any event, the formation of the more modern political parties closer to what we think of them as, finally, can be traced back to the 19th century, long after the French Revolution. The first of them emerged out of middle class liberals. The aristocracy disappeared for good in the 20th century, leaving only conservative parties that then had to compromise in order to gain a base of voters. Meanwhile, capitalism grew and with it the reactionary and equally multiplying working class, which began to form trade unions or identify with socialist, communist or even anarchist ideals.

Socialist parties originally held the purpose of giving political rights to workers and later split from the originally allied liberals, as they wanted said workers to actually have the control over the means of production. The colour red was adopted by many socialist parties, and is still seen in most european socialist parties today. It also became the colour of Communism as it developed out of WWI, in support of the Bolshevik Revolution.

On the opposite side of the spectrum, right-wing parties may include extreme conservatives, fascists, and nationalists. Depending on the time and place, these, too, either fall strongly into the people’s favour or out of it. Fascism, for instance, was obviously quite popular leading up to and during World War II in countries such as Germany or Italy, while being quite strongly condemned afterwards.

But to complete the political spectrum, another, mellower type of conservative party began to appear as a means to counteract liberalism – Christian democrats, who were originally founded by Catholics seeing a threat to their traditional values.

Finally, green parties with a strong stance on climate policies developed last and only recently, when the general public became aware of such issues in the late 20th century.

In any event, as you can see, since its original inception, the system of classifying everybody as left or right has obviously branched out, diversified with considerable nuance.

It should also be noted here that the development of what exactly ‘left’ and ‘right’ ended up meaning, did not happen in the same way in all countries.

For example, while some Americans may be quick to cry ‘communist’ at their Democrat party – which actually stands in part for so-called ‘libertarianism’ – modern-day French people would only scoff and call the same party ‘bourgeois’ instead. What is considered ‘left-wing’ in the United States is actually regarded as still pretty far on the right in some European countries. France and Germany’s respective political ‘left’, for instance, are on the side of socialism.

Additionally, it has been argued that ‘left’ and ‘right’ cannot properly encompass where one stands on most issues, as the political landscape is complex and includes many social and economic factors. While there are many ways of detailing this, one widely influential way of expressing this complexity was conceived by Hans Eysenck in the 1950s: He applied two axes, ‘radical’ to ‘conservative’ and ‘democratic’ to ‘authoritarian’, based on his (sometimes contested) research.

Another helpful two-axis system stems from Virginia Postrel, who in 1998 expanded the economic left-right axis with one ranging from authoritarianism to libertarianism.

And because it has grown into a field of study easily as varied as the political fractions, many more examples could be given, all with their own virtues and flaws. However, in most countries, ‘left’ and ‘right’ are still the clearest signifiers of which hill one is prepared to die on.

If you like this article, you may also enjoy: