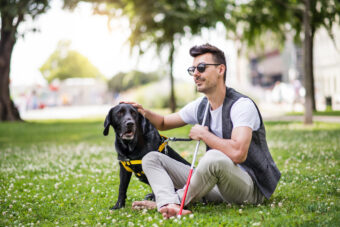 If Daredevil has taught us anything, it’s that, while a closely guarded secret within the blind community, blind people inevitably all become superheroes after losing their sight thanks to their other senses being insanely enhanced. But when talking the real world, does this enhancing of one’s other senses really occur when the lights go out permanently?

Well, for those who hate us droning on, the one sentence answer is that it turns… out absolutely yes… but also no, not at all.

You see, it turns out the universe hates things being black and white and almost nothing is in reality, which may come as a shock to anyone who’s ever read the news or used social media… basically ever.

So let’s dive into it shall we?

First, let’s talk about the general case. Do blind blind people, in general, have enhanced hearing and other senses? Nope, not even a little bit with a caveat we’ll get into in a moment that is quite fascinating. But for now, in the general case, no the ear drum doesn’t become more sensitive or any other such change in the hardware. In fact, in this general case, again with a caveat we’ll get into, nothing particular seems to change with the brain either.

In fact, not just indicated by countless studies, but for those who hate science and only believe anecdotal accounts, numerous surveys of blind people themselves have found that they agree with this notion and feel that their sense of hearing or touch is no better than that of a sighted person.

So why do blind people seem to perceive things better with their other senses than the sighted? In short, they’re paying attention and they practice like crazy simply because they have no other choice.

For example, when a sighted person hears a car, their natural inclination is not to try to tell from the sound how far away it is, but simply a knee-jerk reaction to turn and look and gather the needed data that way. The same is true when touching something or countless other such things where when the eyes are open and looking, they’re going to dominate the perception of what you’re experiencing. And note here, not just a perceived domination, it turns out brain scans show that when this is happening, the brain is quite literally inhibiting activation of the areas controlling other senses. This is, presumably, why when you’re trying to really hear something well, your naturally inclination is to close your eyes. Or similarly, when you’re really trying to focus on something visually, such as driving in a complex environment, you’ll turn down the radio so you can see better…

And speaking of that, for a sighted person, close your eyes and really listen or feel, and it turns out you’ll perceive things just as well as a blind person, with the caveat that blind people become massively more practiced in various ways and this experience can in turn lend to better perceived perception.

For example, while if you close your eyes and hear a TV next to you, you might correctly judge approximately where the TV is and be able to point to it and say about how far away it is, a blind person would instinctively also realize that probably means there is a wall right behind the TV too, and might even be able to tell approximately how far away the wall is from the way the sound is bouncing. Further, with amazing amounts of practice judging car noises, for example, telling how far away the thing is with better accuracy becomes more and more natural without conscious thought. It’s simply practice, rather than development of ability to hear things a sighted person can’t

Perhaps no example illustrates this better than when speaking of echolocation, which many a blind person with a bit of practice gets quite good at. However, according to a 2014 survey paper, A Summary of Research Investigating Echolocation Abilities of Blind and Sighted Humans, with practice, sighted people are able to get just as good at this particular skill.

Similarly, a blind person might use their cane to tap things and be able to tell what the surface is based on the sound and general feel through the cane. But this, too, is not a superior perception- just experience, practice, and paying attention.

But that’s not all very interesting and we did promise you a caveat, and it is a super fascinating one. You see, it turns out for some blind people, they do gain the ability for genuine superior hearing, at least with regards to certain aspects of hearing. So what’s going on here?

Well, it turns out recent research has concluded that, in people blinded from birth or very early in their life, the brain actually really does “rewire” itself, so to speak, to process auditory and touch sensory input differently than a sighted person’s brain does. The result, is, for example, verifiable superior hearing with one caveat because, again, the universe hates simplicity.

To do this rewiring, the brain goes ahead and uses a portion of it that in this individual simply is going unused, with their auditory cortex essentially “hijacking” the visual cortex to confer what essentially amounts to more processing power for auditory input to this region of the brain. This curious phenomenon is referred to as “cross-modal neuroplasticity” or more technically “witchcraft”.

For a little more detail, experiments conducted at the Oregon Health & Science University have found that in early blind individuals, the medial occipital is particularly active while these blind from birth or early age individuals are processing the location of sounds. In a sighted person this region of the brain is dedicated to “registering visual signals, by setting the threshold at which they are noticed”- a function that is essentially useless in the brain of a person who cannot see. But no more. Life… uh… finds a way.

Interestingly, no such similar brain activity is noted in individuals who become blind at a later point in their life, which begs the question, why? The leading hypothesis is that early in development, the human brain is much more malleable than it is later in life and the areas that process senses are largely connected. As a person ages and learns to process various sensory inputs, these connections are severed or weakened where unused or where things are adapting strongly for a specific purpose. However, in a person blinded from a young age, since they never learn to process visual input properly, these connections remain intact and simply get used for something somewhat similar, but via a different sense. The net effect is verifiablely better hearing for certain tasks.

Exactly how much keener a blind person’s hearing is in these cases, however, isn’t yet clear. But small-scale experiments have shown that these blind individuals can usually outperform sighted people in many hearing related tests, such as picking up changes in pitch or the location of a sound monaural- or in layman’s terms, with only one ear.

That said, yet another fascinating thing is that while this adaption comes with enhancement in some aspects of hearing, it actually seems to hurt the blind person’s ability to perceive the direction and location of sound if it is coming from well above or well below them. In other words, the enhanced perception on the directional front only seems to apply to horizontal direction. Otherwise, sighted people actually perform better or as well at determining such vertical direction. Why this is the case really isn’t understood at all. But it shows up clearly in testing.

One more interesting thing to note here is that, it turns out similar types of things occur when talking about, for example, someone who is born able to see, but not hear. So this might have you wondering, if the brain is sort of re-wiring itself to use a portion of itself normally dedicated for something else, what happens if you turn back on the dormant sense, such as with cochlear implants for deaf people.

Well, it turns out, in many cases the brain simply can’t easily readjust back, and these individuals often struggle with understanding what they’re hearing. That said, because this area of research is quite new, much more needs done to see if this can be undone in these cases with proper training programs or the like. As, contrary to a long held perception before, it turns out even when we humans are particularly well seasoned, the brain is still surprisingly adaptable in many, though not all, cases. For an example of where it can’t, as we’ve covered before in detail when talking about deaf people, they really, really need to learn some complex language before the age of around 5-8-ish. If they do not, they often lose the ability to do so at a normal level or even have normal cognitive abilities after at all. Before complex sign languages and the like, this was largely why deaf people throughout history were thought to be mentally deficient. It wasn’t that they were born that way. In most cases their brains were perfectly normal. It was that their brain needed a language to function properly and they weren’t taught one. Eventually, the issues with their cognitive function becomes permanent, even if you attempt in later years to teach language.

But going back to this specific example of the brain’s ability to re-wire something that had already been co-opted for other uses, those who, say could hear from childhood, lost their hearing later in life, then got it back even potentially decades later, often have no such issues with processing sounds after, as their brain did not make this sort of adaptation and has some pre-wiring still there, if unused for a time.

So to conclude, individuals who are either born blind or blinded at a very early age do in fact seem to hear “better” than a sighted person in many ways. Although, curiously, when talking about vertical direction of sounds above or below, they struggle with this or are no better than everyone else for some inexplicable reason. As for the rest of blind individuals, the perception of being able to hear better is not so much about actual superior hearing, simply that they are paying attention, and are much more practiced at listening to the nuances of sounds and the implications of them. Take a sighted person and give them a bit of training, or just have them close their eyes and focus, and they are generally perfectly capable of the same.