The Origins of DOOM 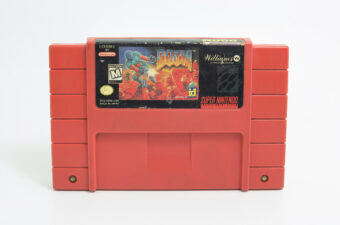 DOOM isn’t so much a video game as it is a pop-culture phenomenon, a media touchstone that is consistently ranked as one of the most influential games of all time. A game so popular it spawned a host of copycat releases, kick started the FPS (First person shooter) genre and was at one point in history, installed on more PCs worldwide than Windows 95. According to the game’s creators though, it likely would never have existed as we know if not for a game of Dungeons & Dragons that went just horribly wrong.

According to John Romero, one of the driving creative forces behind DOOM and a notable figure in the gaming community, the genesis for the game can be traced back to the fall of 1992- specifically in the months following the release of Spear of Destiny, another video game worked on and developed by him and the team at id Software.

Romero has since explained that initially, DOOM was supposed to be a game based on the Aliens franchise, of which many members of id were fans. Although the team managed to bend the ear of a representative at 20th Century Fox who seemed excited about the idea of making a game using the Aliens’ license, they ultimately dropped out of the offer, citing a desire for “total creative control”.

Following the breakdown of talks with Fox, another key figure in DOOM history, John Carmack, made the suggestion that they do “[basically] same thing, except with hellspawn instead of Aliens”. This brings us back to a game of Dungeons & Dragonns the team had played one evening, in which through a confluence of horrifically botched dice rolls and poor planning, the game had ended when one team member accidentally opened a portal to hell, allowing demons to overrun the entire planet. Another influence was the horror film, Evil Dead 2, of which the team were also fans.

As for the name, according to Carmack, the idea came from a scene in the film The Color of Money in which Tom Cruise plays a pool hustler. The scene features Cruise’s character walking into a bar holding a case (containing his pool cue) which piques the curiosity of another person in the scene who asks what it contains. Cruise’s character respond with sly smile and simply says,”Doom!” before proceeding to utterly dominate every person in the bar at pool. Carmack enjoyed the scene and likened “the resulting carnage” from Cruise’s cocky assurance that his case contains doom to how the game would be seen by the gaming industry of the time.

In any event, these ideas all greatly interested fellow id Software employee, Tom Hall, who upon hearing all of this, immediately set about creating what is now known as the “DOOM bible”. This legendary tome contained story details, monster sketches and even a potential press release for the game as Hall envisioned it – The game’s tagline? DOOM — where the sanest place is behind a trigger. Despite the substantial amount of work Hall put into creating the Bible, virtually nothing from it actually ended up being included in the final version of the game we got to play.

The most commonly cited reason for why so few elements of the DOOM Bible made it into the final product is that they were simply too elaborate for the type of action-orientated game they were trying to make. For example, in Hall’s initial treatment of the game, the story of DOOM was meant to follow the journey of 5 soldiers on an alien world as they travelled to Hell and back to fight the demonic hordes of the underworld and featured a sprawling, long-winded plot. Carmack poo-pooed this idea, famously quipping “Story in a game is like story in a porn movie. It’s expected to be there, but it’s not that important.”

This said, several aspects of Hall’s original idea did make it into the final game, albeit with some changes. For instance, Hall’s original idea of having the game take place on an alien planet called Tei Tenga and the idea of invading Hell in the latter of half of the game was liked by staff. It was ultimately, however, reworked to have the game be set on the twin moons of Mars, Phobos and Deimos, and the plot point of having the player be stranded there by accident was dropped because Carmack didn’t like the implied insinuation that the player character had to have “sucked” to end up stranded there. As such it was reworked so that the player is specifically called to Mars’ moon.

Likewise, the staff liked the idea of playing as a marine, but not the idea of playing as four different characters with their own personalities. So instead the game was changed to focus around a single, unnamed marine, popularly nicknamed “Doomguy” by fans. In regards to this specific change, Romero felt that it was especially important to never name the marine you play as in DOOM, because, to quote him, “it’s supposed to be you!”

The game, however, was created from the ground up with the idea of being able to play it cooperatively or competitively via an internet or modem connection with other players.

Another problem with Hall’s treatment of DOOM was his insistence on realism which inadvertently ended up making the game less fun in their opinion. For example, Hall extensively studied real-world military bases and designed several levels based on their specifications for missions of the game due to be set in a military space station. Though accurate, these levels were bland and ultimately dull to play, mostly consisting of square flat environments that didn’t feature any of the unusual geometry or textures that eventually made the game so iconic. This difference in opinions and ideas ultimately saw Hall leave development for the game.

Early in development DOOM was also supposed to feature an elaborate point scoring system as well as the ability to earn and lose lives, similar to many arcade games of the time. However, Romero didn’t like this idea as the thought of losing all your lives (and thus your progress) on a game you owned didn’t appeal to him and the concept of the game was focused to instead revolve entirely around a simple mantra, “kill everything and get out alive”.

Moving on to the now iconic visual look of DOOM, this was partially inspired by a number of sources, most notably the disturbing biomechanical artwork of HR Giger who is famous for his work on the Alien series. Also in the mix is the horrifying eldritch abominations inspired by the writings of HP Lovecraft. To round out the main inspirations, we also have the artwork of heavy metal album covers, which often features hellish nightmare-scapes like those found in the game’s later levels. All combined, this gave the world a rather unique for the time game aesthetic.

Speaking of heavy metal, the game’s soundtrack was directly influenced by this genre so much so that the only real direction composer Bobby Prince got from Romero was being handed a stack of his favourite metal albums with the instruction to create something similar.

Prince did exactly that, with many of the game’s tracks featuring riffs that directly homage the work of heavy metal pioneers like Metallica, Slayer and Pantera.

As a humorous side note, sound effects for the game, and in particular the screams of the demonic enemies you fight a seemingly infinite number of, were partially supplied by Romero himself. You see, Romero was known to provide his own (often enthusiastic) sound effects for monsters and enemies while playing early builds of the game much to the amusement of co-workers who’d frequently stop working to watch, or more accurately, listen to him play the game.

Interestingly some of the enemies found in DOOM, such as the Cyberdemon and Baron of Hell were actually clay figurines that were then scanned into a computer and then digitised using a custom piece of software designed by Carmack called the “Fuzzy Pumper Palette Shop”. Similarly, the sprites used for some of the game’s weapons like the shotgun and pistol were based on photos taken of toys bought at a local Toys “R” Us that were then digitised.

Despite looking dated today, at the time of the release of DOOM, it was considered a technological milestone, featuring things that were previouslymostly unheard of in video games such as ambient lighting, stereo sound effects and realistic looking 3-D environments. Even things like stairs and having rooms of varying height were considered groundbreaking at the time.

Completed in just over a year, the game notably never initially received a wide-commercial release, being instead sold via mail-order and even offered for free via download on various websites. On top of this, id Software not only allowed people to share the game with one another without paying for it, but openly encouraged the practise to bolster the size of their fanbase.

For further promotion, prior to its release, DOOM was the subject of much conversation on the early 1990s internet and the developers often stoked the fires of interest with press releases saying things like “DOOM is going to be like Wolfenstein  times a million!” and “[we expect DOOM to be] the number one cause of decreased productivity in businesses around the world”.

In regards to the latter, despite the comments tongue-in-cheek nature, it actually came true with many businesses across the world having to ban DOOM from their offices to stop people playing it and hogging the lines, so to speak, of their networks. Remember, this was a time when not everyone had access to the interwebs, let alone the types of high speed connections we have today. On top of company bannings, some anti-virus software makers even began including features specifically designed to stop people from playing DOOM on their computers, which worked about as well as you’d expect.

DOOM was so popular that in 1995, that even following a multi-million dollar advertising campaign from Microsoft, the game was still installed on more systems than Microsoft’s groundbreaking new operating system, Windows 95.

Not too shabby for the team at id Software, then comprising just 12 people, with the team that made DOOM itself numbering just 6.