November 5, 2018 Karl Smallwood
Mike A. asks: I was recently playing the game Tomb Raider & I got to thinking about the trope of the booby trapped or puzzle in an ancient ruin. We see it in comics, movies like Indiana Jones, & games. Is this pure fantasy or were there ever there traps, puzzles, or just intricate mechanical mechanisms from the ancient world in these tombs? 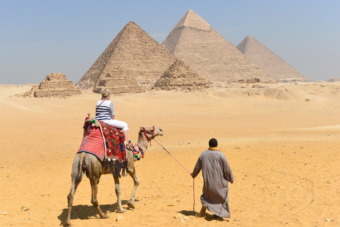 The all-powerful pharaohs of ancient Egypt were frequently buried alongside a literal wealth of fabulous treasure- treasure that, as you can probably imagine, the pharaohs were very keen to protect. So did they actually have significant preventative measures in place to stop anyone from stealing their stuff after they’d gone a little moldy? Well, yes and no, but when it comes to the idea of elaborate booby traps or puzzles as depicted by Hollywood and in games, definitively no.

To begin with, it’s important to understand that generally the pharaoh’s own subjects and in some cases, their direct successors, were the ones stealing their afterlife retirement plan. You see, a pharaoh’s power was more or less absolute and they could do pretty much anything they pleased. As a result, many pharaohs would have the tombs of their ancestors looted, in some cases even reusing the items for their own burial. There are even stories of pharaohs unceremoniously having the mummy of their predecessor dumped out of their sarcophagus so that even that container could be reused.

This all was particularly the case in times of hardship when Egyptian nobility would think nothing of ransacking the final resting place of a beloved family member or ancestor because, well, technically, in their view it was their stuff sitting there.

A perk of being the ones who set the rules, this tomb raiding practise by nobility was tolerated in the ancient Egyptian world. However, tomb raiding from individuals not directly related to the deceased wasn’t as much and it carried some rather harsh penalties. Punishments for raiding a tomb ranged from brutal death to public flogging, depending on how important the crypt that was desecrated was and the value of the items stolen.

In regards to the kind of death penalty meted out to thieves, it was common practise to burn them alive. Why? Well in addition to being a rather unpleasant way to die, this would condemn the thief to an eternity of nothingness due to the belief in ancient times that if you died without a body, you couldn’t enter the afterlife.

Other forms of execution included decapitation, which would similarly mean the thief couldn’t enter the afterlife, or impalement, which the ancient Egyptians believed would result in the spirit of the deceased being tied to that singular location, forever… Obviously, this was seen as a bad thing and the hope of pharaohs was that such harsh punishments would deter thieves.

The problem with all these punishments is that it would seem it was rather easy to get out of getting into any trouble at all. For example, consider this account by one 11th century BCE tomb raider, Amenpanufer, on both his method of tomb raiding and how he got out of trouble, even when caught:

We went to rob the tombs as is our usual habit and we found the pyramid tomb of King Sobekemsaf, this tomb being unlike the pyramids and tombs of the nobles which we usually rob. We took our copper tools and forced a way into the pyramid of this king through its innermost part. We located the underground chambers and, taking lighted candles in our hands, went down.

We found the god lying at the back of his burial place. And we found the burial place of Queen Nubkhaas, his consort, beside him, it being protected and guarded by plaster and covered with rubble.

We opened their sarcophagi and their coffins, and found the noble mummy of the king equipped with a sword. There were a large number of amulets and jewels of gold on his neck and he wore a headpiece of gold. The noble mummy of the king was completely covered in gold and his coffins were decorated with gold and with silver inside and out and inlaid with precious stones. We collected the gold that we found on the mummy of the god including the amulets and jewels which were on his neck. We set fire to their coffins.

After some days, the district officers of Thebes heard that we had been robbing in the west and they arrested me and imprisoned me in the office of the mayor of Thebes. I took the twenty deben of gold that represented my share and I gave them to Khaemope, the district scribe of the landing quay of Thebes. He released me and I rejoined my colleagues and they compensated me with a share again. And so I got into the habit of robbing the tombs.

Tomb raiding was so commonplace in ancient times that near enough every level of society took part in it, including somewhat hilariously, the very people charged with constructing the tombs, as well as those in charge of burying the dead.

Sadly, while Hollywood would have you believe that the tombs of ancient pharaohs were teeming with a manner of deadly booby-traps, the truth is much more vanilla. For starters, the idea of elaborate booby-traps in ancient tombs is considered to be nothing more than a myth. To quote one Emily Teeter, an expert on Egyptian and Nubian antiquities working at the University of Chicago –

I am really sorry to report that if curses are out, then there is really nothing devious. Hollywood has turned standard architectural features like sliding portcullis blocks, shafts, and sand filled chambers into objects of horror.

This isn’t to say you won’t find many reports of booby-traps from otherwise seemingly reputable sources, stating things like that Egyptian tombs were filled with everything from razor sharp wires located at exactly head height to deadly snakes- all of which have been written off by actual experts as fanciful claims that have no basis in reality.

Instead, the countermeasures in place to deter thieves tended to just be obstacles put in the path to the goods, such as huge slabs of granite or random debris and the like blocking the way. They also sometimes employed empty chambers with the real chamber containing the various goods walled up somewhere else in the structure, etc.

Other than these sorts of rather quaint security measures, other deterrents tended to just be more metaphysical in nature- mostly limited to curses that would condemn a thieves’ soul to a eternity of perpetual agony or the like.

For example, consider the following curse placed over the tomb of pharaoh Amenhotep by one of his high priests which threatened, amongst other things, that any thief would –

lose their earthly positions and honors, be incinerated in a furnace in execration rites, capsize and drown at sea, have no successors, receive no tomb or funerary offerings of their own, and their bodies would decay because they will starve without sustenance and their bones will perish…

Given the widespread pilfering of tombs that went on back then and the fact that the person placing the curse would sometimes take part in said pilfering, it’s safe to say these sorts of curses weren’t something a lot of people took seriously.

Pharaoh Amenhotep got so annoyed with how often the tombs of his ancestors were raided  that he ordered the construction of a place known as Set-Ma’at – quite literally “Place of Truth” – a village of conscripts charged with both building and protecting the tombs of nobility. The idea of Set-Ma’at, sometimes also known as Deir el-Medina was simple –

The workers of the village would create the tombs and protect their creation and, since they relied on the sta

te for their wages and homes, they would be loyal and discreet regarding the location of the tombs and the amount of treasure to be found within.

However, frequent delays in the delivery of supplies to the villagers, including things like food and water, and the basic nature of said payment, did little to foster trust and loyalty amongst the townsfolk, which, coupled with their intricate knowledge of the tombs themselves and exactly what treasure was stored within them and where, naturally led to widespread theft.

Despite the isolated nature of the village, workers could still fence stolen goods by simply walking to a nearby city and trading the goods, often to those who would then do things like melt down any gold or the like and create new objects that couldn’t be traced back to a tomb.

Now all this said, it has been speculated that hematite powder, which when inhaled in sufficient quantities could potentially cause death, was used as something of a booby trap, if not terribly effective. For example, in one tomb discovered in 2001 at the Bahariya Oasis, there was several inches of this powder on the floor.

It’s also sometimes said that mercury was used as an intentional deterrent in many ancient tombs that have been discovered in China, like the burial site of Emperor Qin Shi Huang. However, this notion is universally dismissed by experts, though the sheer amount of mercury sometimes used was such that it could still be a potential health hazard, if also likely not terribly effective at accidentally preventing tomb raiding.

For the most part though, the tombs of the ancient emperors, kings and pharaohs were protected, if at all, merely by simple physical barriers, abstract threats such as curses, and the ever present risk of being horribly mutilated and killed should the perpetrator ever be caught, assuming they didn’t simply just bribe their way out of the situation. Unsurprisingly from this, the plundering of tombs was widespread and almost comically easy for certain subsets of the population who had access to the tombs or the right tools.