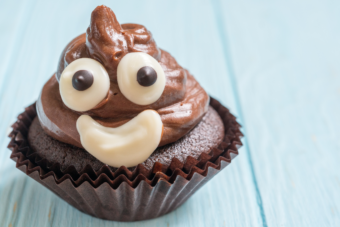 One of the harsh realities of life in space is that in an emergency, astronauts may have to live in their space suits for days on end. If that ever does happen, how will they go to the bathroom? That’s the question NASA hopes to answer.

WHEN YOU GOTTA GO…

There are three situations during a typical mission to the International Space Station in which the astronauts may not have access to a bathroom when they need one: 1) on their way to the space station at the start of the mission; 2) on their way back to Earth at the end of the mission; and 3) during spacewalks, when they are outside the station and can’t get back inside easily or quickly. None of these circumstances require the astronauts to go more than ten hours without access to a toilet, so the solution, while awkward, is simple: they wear diapers inside their space suits. And if they have to go, they go.

Even in an emergency, such as if a module of the ISS were to be struck by a piece of space debris and losing pressure, if the astronauts had to evacuate the station they’d be back on Earth in less than a day, so once again, diapers would suffice.

But what about on a mission to Mars, when Earth will be many months away instead of only hours? If a spacecraft on its way to the Red Planet were to be hit by a micrometeoroid and lose pressure, the astronauts might be stuck inside their space suits for several days until they repaired the damage and were able to repressurize the spacecraft. In such a situation a single diaper, worn for days, would not be good enough.

Ordinarily NASA tackles such challenges with in-house engineers or assigns them to a contractor, but in October 2016 it took a more novel approach. Working with a crowdsourcing website called HeroX, it launched a contest called the “Space Poop Challenge” and invited all comers to take a stab at coming up with an in-suit “fecal, urine and menstrual management system” that would enable an astronaut to remain in their space suit for 144 hours straight. Why 144 hours? The most likely explanation is because 144 hours adds up to six days. (It’s also possible that someone at NASA has a sense of humor: 144 hours is also 12 dozen hours. What’s another word for 12 dozen? Gross!) Any solution entered in the contest would have to be simple enough for an astronaut to operate in microgravity while wearing bulky spacesuit gloves. It would also have to either store the liquid and solid waste somewhere inside the suit, or remove it entirely.

When NASA gave contestants just over two months to invent something, it wasn’t sure how many people would enter. It was pleasantly surprised to receive more than 5,000 proposals from nearly 20,000 people all over the world, including many who worked in teams. After studying the entries for two months, in February 2017 NASA announced the winners. And they are…

Inventor: Hugo Shelley, a product designer in the UK

Details: The underwear looks a lot like a pair of spandex biking shorts with front and rear catheters attached—the external type of catheter, so they’re worn over the anatomical areas in question, not inserted into them, which would be way too uncomfortable if worn for six days straight. An electronic mechanism disinfects liquid and solid waste and pumps it into a sealable, compressible pouch on the leg of the garment.

Details: The device resembles the cup of an athletic supporter, one with two small air hoses attached at the top, and a larger hose at the bottom. Air flows through the upper hoses into the cup, blowing any urine or menstrual fluids into the larger hose at the bottom, and from there to a storage pouch inside the suit. Bonus: the airflow is generated by the astronauts themselves as they move around while wearing the space suit, so there are fewer mechanical parts to break.

Note: The Air-PUSH girdle does not address the issue of astronaut poop—an odd choice for an entrant in a contest called the Space Poop Challenge, but NASA judges were nonetheless impressed enough to award the team the $10,000 second prize. (They’re number two!)

Details: The system consists of an airlock, called a “perineal access port,” installed on the crotch of the astronaut’s space suit, and a series of toileting “tools” that can be passed through the airlock without the space suit losing air pressure. Cardon drew inspiration from “keyhole” surgeries, in which complicated operations are performed by inserting narrow surgical tools through tiny incisions. “They can even replace heart valves now through catheters in an artery. So [a tiny opening] should be able to handle a little bit of poop,” he says.

Cardon was disgusted by the idea of storing six days’ worth of human waste inside a space suit. So unlike the other two winners, his system removes the waste from the suit for storage or disposal elsewhere.

Tools of the Trade:

If you missed the Space Poop Challenge, fear not! The agency was so impressed by the entries that it’s considering doing more contests. “We enjoyed seeing the innovative approaches, given such a demanding scenario,” says engineer Kirstyn Johnson. “Others at NASA are now thinking about ways we can leverage a crowdsourcing approach to solve more of our spaceflight challenges.”