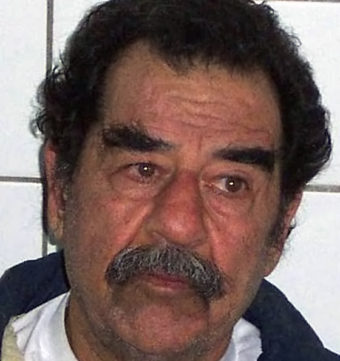 Iraqi dictator Saddam Hussein was big news from the 1980s through the 2000s. But it wasn’t until years after his death that the world got to hear his story in his own words.

The United States went to war with him twice. After he invaded Kuwait in August 1990, President George H. W. Bush organized a military coalition of 39 states that drove Hussein out of Kuwait in 1991. That was the first time—the Gulf War.

Part of the cease-fire agreement that ended the Gulf War was that Hussein had to destroy all of his weapons of mass destruction, or WMDs. But by early 2003, President George W. Bush (son of George H. W.) had become convinced that Hussein was stockpiling the banned weapons, and in March 2003 the United States invaded Iraq a second time to seize them. The Iraqi government fell in April 2003 and Saddam went into hiding, but was captured and arrested eight months later. The WMDs that were used to justify the invasion of Iraq were never found, because they did not exist. The United States’ intelligence agencies got it wrong: Hussein had not been stockpiling the weapons after all.

The capture of Saddam Hussein by American forces offered FBI interrogators a rare opportunity to peer into the mind of a dictator and better understand his motives for invading Iran and Kuwait, and for expelling UN weapons inspectors from Iraq in 1998. Had the inspectors been allowed to continue their work, they might have helped to prevent the war, by providing proof that Saddam wasn’t stockpiling WMDs. So why did Saddam kick them out? He gave answers to these and other questions while under interrogation in what was called “Operation Desert Spider.” The following are excerpts from FBI agent George Piro’s interrogation transcripts, which were declassified in 2009.

ON THE IRAN-IRAQ WAR

“According to Hussein, Iran would have occupied all of the Arab world if it had not been for Iraq. As such, Iraq expected the Arab world to support them during and after the war. However, Iraq saw the opposite, especially from Kuwait. At the end of the war as Iraq began the rebuilding process, the price of oil was approximately $7 per barrel. In Hussein’s opinion, Iraq could not possibly rebuild its infrastructure and economy with oil prices at this level. Kuwait was especially at fault regarding these low oil prices.”

ON THE INVASION OF KUWAIT

“Hussein stated that he devised the plan for the invasion of Kuwait…The invasion was accomplished within two and a half hours, equivalent to that previously estimated. Hussein stated it should have taken no more than one hour. He believes it should have occurred more quickly than originally estimated due to support for the invasion from the Kuwaiti people. Hussein reiterated a previous statement to the interviewers that Iraq was asked by the Kuwaiti people to invade their country in order to remove the Kuwaiti leadership. When asked to clarify how Kuwaiti citizens communicated their desires to the Iraqi government prior to the invasion, Hussein stated some, not all, Kuwaitis felt this way. He added, ‘we felt they were asking.’ ”

“During Iraq’s occupation of Kuwait, Hussein denied knowledge of the commission of atrocities by the Iraqi military. These atrocities include the punishment [and] executions of Kuwaiti individuals who prayed on their roofs, who failed to hang pictures of Hussein, who displayed pictures of the previous Kuwaiti royal family, or who wrote anti-Iraqi graffiti. Hussein stated, ‘This is the first time I have ever heard this.’ He added, of the mentioned punishable offenses, he particularly does not believe two of them were designated as crimes. First, the Iraqi government did not force Iraqis to display pictures of Hussein, therefore, the government would not have forced Kuwaitis to do this. In Iraq, citizens voluntarily chose to display Hussein’s picture in their homes. Second, neither Iraqis, nor Kuwaitis are prohibited from praying anywhere, including their roofs.”

ON THE PERSIAN GULF WAR

“When questioned regarding Iraq’s usage of Kuwaitis, Japanese, and Westerners as human shields during the first Gulf War including the positioning of them at key sites such as communications centers and military positions, Hussein denied that such individuals were taken to Iraqi military positions. He added that the Iraqi government did not, however, prevent individuals from volunteering as human shields to protect facilities such as communications centers. When questioned whether such volunteers existed in 1991, Hussein replied, ‘I do not remember.’ ”

“Regarding the igniting of [150] oil wells in Kuwait by withdrawing Iraqi forces and the subsequent environmental disaster deemed one of the worst in history, Hussein asked, ‘More than Chernobyl?’ He requested to know the number of people who died in Kuwait because of the smoke created by the fires. Hussein denied that Iraqi forces ignited the oil wells. He acknowledged that Iraqi forces burned “oil in trenches” as they were retreating…Hussein stated his belief that it would not be a crime for the Iraqi military to burn oil in order to prevent planes from attacking them. If such an event took place, this would have been an act of a desperate person who had no weapons remaining with which to defend himself.”

“Hussein stated Osama Bin Laden’s ideology was no different than the many zealots who came before him. The two did not have the same belief or vision. Hussein claimed he had never personally seen or met Bin Laden…Hussein stated the Iraqi government did not cooperate with Bin Laden. Agent Piro asked Hussein ‘why not’ since Iraq and Bin Laden had the same enemies, the United States and Saudi Arabia. Agent Piro then cited the quote ‘my enemy’s enemy is my brother.’ Hussein replied that the United States was not Iraq’s enemy, but that Hussein opposed its politics. If he wanted to cooperate with the enemies of the United States, Hussein would have with North Korea, which he claimed to have a relationship with, or China.”

ON THE IRAQ WAR

“Even though Saddam claimed Iraq did not have weapons of mass destruction (WMDs), the threat from Iran was the major factor as to why he did not allow the return of the UN inspectors. Saddam stated he was more concerned about Iran discovering Iraq’s weaknesses and vulnerabilities than the repercussions of the United States for his refusal to allow UN inspectors back into Iraq. In his opinion, the UN inspectors would have directly identified to the Iranians where to inflict maximum damage to Iraq. Saddam demonstrated this by pointing at his arm and stated that striking someone on the forearm would not have the same effect as striking someone at the elbow or wrist, which would significantly disable the ability to use the arm.”

“Hussein said, ‘If you asked the American soldier, who came to Iraq to find weapons of mass destruction, but none could be found, and who came to remove the leaders of the Hussein dictatorship, who are all in jail now, but are replaced with other dictators, whether he wanted to stay or go, he would say go.’ ”

[In a later interview]: “Agent Piro reminded Hussein that he had previously made it clear that he still considered himself the President of Iraq. However, there is a new President who is representing the country and the people of Iraq. Agent Piro told Hussein he is no longer the President of Iraq; he was done. Hussein replied yes he knows, saying what could he do as it was God’s choice. Agent Piro asked him if he had any thoughts about his future and Hussein stated that it was in God’s hands. Agent Piro pointed out to Hussein that God was very busy and had more important issues than he and Agent Piro. Hussein agreed, at which point, Agent Piro told Hussein that his life is nearing its end, and asked if he wanted the remainder of his life to have meaning, to which he responded yes.”

“Hussein stated it is not only important what people say about him now but what they think in the future, 500 or 1,000 years from now. The most important thing, however, is what God thinks.”