A Great Place to Go… 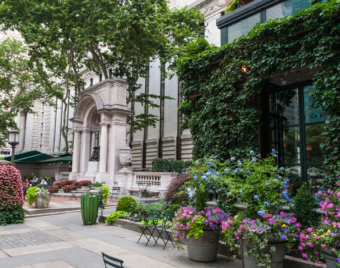 Let’s face it: New York City is famous for a lot of things, but the abundance and cleanliness of public restrooms aren’t among them. There is one notable exception, however, just outside the main branch of the New York Public Library.

One afternoon in 1979, the 77-year-old heiress Brooke Astor, New York City’s “First Lady of Philanthropy” and a trustee of the New York Public Library, was walking into the library for a meeting of the trustees. But before she could enter, she was accosted by a “hooligan,” as she put it, who tried to sell her drugs.

The drug dealer had walked up to her from Bryant Park, which borders the library to the west. If you’re a New Yorker and you’re old enough to remember what Bryant Park was like in those days, it wouldn’t surprise you to learn that the drug dealer had been loitering there. The nearly ten-acre park had had a seedy reputation as far back as the 1930s. A redesign in 1934 helped for a time, but by the 1970s the park was in trouble again. Prostitutes and druggies were a constant, menacing presence that caused ordinary New Yorkers to keep their distance. The park’s reputation was so bad, in fact, that it had driven down the value of nearby high-rises, because nobody wanted to live or work near it.

Astor was sad to see how low the park had fallen, and she asked her friend and fellow philanthropist David Rockefeller if something could be done. In 1980 he joined with other prominent New Yorkers to create the Bryant Park Restoration Corporation to raise money for improvements. And because the city was mired in a financial crisis at the time, Rockefeller also struck a deal that allowed the corporation to take over management of the park, though the city would continue to own it.

One project that needed funding was the restoration of the park’s statue of the 19th-century poet and abolitionist William Cullen Bryant, for whom the park was named. Rockefeller asked a charity called the J. M. Kaplan Fund to contribute to the project, but the charity’s president, Joan Davidson, wasn’t interested. She did, however, offer to donate $50,000 to reopen Bryant Park’s restrooms, which had closed in the mid-1960s and never reopened. Public restrooms, Davidson felt, were “more essential to life in the city” than statues. Rockefeller accepted the offer.

In all, the corporation raised more than $9 million to renovate the park. The work was scheduled to coincide with the underground expansion of the New York Public Library: In 1988 the park was closed to the public and part of it was excavated to build an underground wing for the library. After the structure was completed, the park was rebuilt on top of it.

Walls and hedges that provided hideaways for illicit activities in the old park were torn down to make the redesigned park safer and more open, and to give it a friendlier feel. Hundreds of metal chairs and tables were set out on the large lawn, to give workers in the surrounding buildings an enticing place to sit and eat their lunches. To attract seniors, there was a reading room with free books, and to pull in families with kids, the park installed a carousel. Open-air concerts and movie nights were planned for the summer, and an ice rink and holiday shopping village were set up in the winter. All of it was patrolled by eight police officers during the day, and four officers after hours when the park was closed.

These were all wonderful improvements to be sure, but they were being made in a park that had been a no-man’s-land for more than two decades. Would people really be willing to risk a visit to the new park? Rather than leave anything to chance, the corporation decided to make the restrooms as elegant as any of those in the city’s finest four-star restaurants and hotels—more like a “powder room in a country estate” than a typical restroom in a city park, said the corporation’s president, Dan Biederman.

“Mrs. Astor was in my mind. Anybody, from homeless people to Mrs. Astor, could use it,” he told the New York Times.

The granite-faced Greek Revival building that housed the restrooms had its stonework lovingly restored. An elegant new tile floor was installed, and the walls were tiled around the sinks and given fresh coats of paint as well. Stylish “vandal-proof” porcelain sinks and toilets were installed, and a sound system was put in to provide classical music. The artwork, lighting fixtures, and other design elements were as stylish and tasteful as those in the finest restrooms in the city.

For new visitors to the park, the first sign that these were no ordinary city park restrooms appeared just inside the entrance, where a large urn overflowing with fresh-cut flowers, delivered daily, greeted visitors. Another difference: not one but two friendly full-time toilet attendants, who kept the bathrooms spotless. The improvements cost well into the hundreds of thousands, but it was all paid for out of contributions (including the initial $50,000 donated by the Kaplan fund). The cash-strapped city didn’t contribute a cent, and neither did the people who used the restrooms—the facilities were open to all, free of charge.

According to one estimate, some 150,000 people lived, worked, or were staying in hotels within two blocks of Bryant Park when it reopened in 1992. Whatever fears the corporation had that they wouldn’t come dissipated soon after opening day, when they began pouring into the park. In good weather as many as 10,000 people visited during the peak hours of noon to 2:30 p.m., making it one of the busiest city parks in the world. It became such a popular destination that the New York Times called it “Manhattan’s town square.”

A big part of the Bryant Park experience was (and still is) paying a visit to the park’s magnificent restrooms. At peak times, as many as 40 people will be waiting in line to use them; the wait can take 20 minutes or more. The facilities received major upgrades in 2006 and 2017. Today they feature air-conditioning, marble sinks, mirrors framed in cherry wood, and self-flushing toilets with rotating, sanitary, self-cleaning seat covers. The improvements haven’t gone unnoticed: In 2011 the travel website Virtual Tourist voted them the best public restrooms not just in the United States but in the entire world.

As of 2017, the operating budget for the restrooms is $271,000 a year, which includes $27,000 for premium toilet paper and $14,000 for regular deliveries of fresh-cut flowers. The Bryant Park Corporation (“Restoration” was dropped from the name in 2009) still pays for it all; it raises much of the money from voluntary assessments paid by the owners of the high-rises that surround the park. These landlords happily pay, because Bryant Park, no longer a den of crime that causes rents and property values to go down, is actually pushing values up: people will pay a premium to live and work near the park.

…And poop in it. Just as when the park opened, the elegant restrooms are still a big draw. “I’m going to come here more,” a messenger who makes regular trips to the park just to do his business told a reporter when informed that another bathroom upgrade was in the works. “I thought it was already good enough and now they’re going to make it even better? I may live here.”