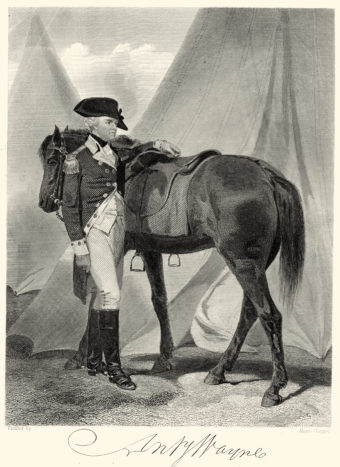 Historians tell many stories about heroes who are so beloved that everyone wants a piece of them. In the case of this man, they mean it literally.

WHAT’S IN A NAME

Great generals frequently earn descriptive nicknames: “Blood and Guts” Patton, “Black Jack” Pershing, and “Stonewall” Jackson, to name a few. Revolutionary War hero “Mad Anthony” Wayne got his nickname for his bravery in battle—he was bold, he took big risks…and he won. His forces smashed the British in a surprise attack on Stony Point, New York; he led the American victory at Monmouth, New Jersey; and he prevented a disastrous rout at Brandywine in Pennsylvania. Washington’s reports repeatedly praised Major General Wayne for his leadership and valor, and the Continental Congress awarded him a special gold medal celebrating the victory at Stony Point.

Wayne was born near Philadelphia on New Year’s Day, 1745. He grew up to be a surveyor, then took over as manager of the family tannery until the Revolutionary War began. When the war ended, Wayne returned to civilian life, but his fighting days weren’t over yet. In 1792 President Washington called him out of retirement for one last combat mission.

The British were arming and sponsoring a coalition of the Miami, Shawnee, Delaware, and Wyandot Indian tribes in Ohio, hoping to protect the British-held Northwest Territory by blocking further westward expansion by the United States. Wayne was given command of the Legion of the United States, with the mission of driving the British out and destroying the coalition.

General Wayne spent almost two years recruiting and training his command, then went into action. On August 20, 1794, the U.S. Legion destroyed the tribal army at the Battle of Fallen Timbers, near present-day Toledo. The Treaty of Greenville was signed August 3, 1795, opening the Northwest Territory to American settlement.

His mission accomplished, Wayne headed home…but never made it. He fell ill en route and died of complications from gout on December 15, 1796, at the age of 51. His body was buried in a plain oak coffin near Erie, Pennsylvania, almost 300 miles west of his family home in Radnor, near Philadelphia. There he rested for 13 years, until his family decided they wanted to bring their hero’s body home for a proper funeral. His son, Isaac, was given the task of bringing the general’s remains back to the family.

Isaac Wayne made the long journey to Erie in a one-horse sulky—a two-wheeled cart more suitable for carrying light loads in urban areas than for carrying a heavy casket all the way back to Radnor. When his father’s body was exhumed, it was remarkably well preserved, but there was no way it could bear bouncing along rutted dirt roads for 300 miles. It was a dilemma for the son. He couldn’t return empty-handed—he had to find another solution. So he asked Dr. Wallace, who had cared for his father during his final illness, to dismember the body. (He refused to watch the operation, saying he wanted to remember his father as he looked in life.)

Next, the body parts were boiled in a large iron pot. Wallace and four assistants then carefully scraped the flesh from the bones, which were reverently placed in a wooden box and presented to the old soldier’s son. The flesh was returned to the original oak casket and reburied in the original grave.

THE OTHER FINAL RESTING PLACE

Isaac returned home with his precious cargo, and, after the long-delayed funeral, the bones of “Mad Anthony” Wayne were finally interred in St. David’s Episcopal Church Cemetery in Radnor, giving the Revolutionary War hero two graves.

But that’s not the end of the story. Today, Radnor is connected to Erie by paved freeways instead of rutted dirt roads. There is a legend that some of the bones were lost on the grueling trip home …and the ghost of “Mad Anthony” haunts the freeways, searching for his lost leg.