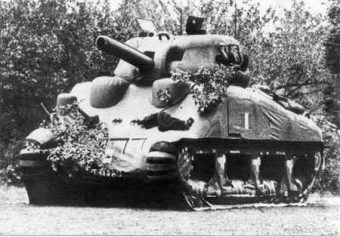 To help win World War II, the Allies used every skill they could come up with—including illusion, trickery…and magic.

In 1940 Britain’s Ministry of Home Security created a military unit dedicated to “civil camouflage.” Their job would be to provide safety through “seriously ridiculous deception.” The unit of camoufleurs—soldiers tasked with finding ways to hide equipment and troop movements from the enemy—would be trained at the Camouflage Development and Training Centre at Farnham Castle, Surrey. The camouflage office’s odd cast of characters included artists, movie set designers, cartoonists, and a third-generation stage magician named Jasper Maskelyne. (Unrelated fact: Maskelyne’s grandfather invented the pay toilet.)

In 1941 the city of Alexandria, Egypt, was home to a million people. Controlling its harbor allowed Allied forces to replenish supplies and troops for the desert war raging in North Africa. That made it a prime target for German Luftwaffe bombing raids. Major Geoffrey Barkas—a former filmmaker appointed head of Middle Eastern Camouflage—called on Jasper Maskelyne and the team of camoufleurs known as the “Magic Gang.” Their mission: conceal the entire port, including the battleships and merchant vessels docked in it. “We can’t cover it up. We can’t disguise it. And we can’t hide it,” Maskelyne reportedly said. “There’s only one solution left to us, isn’t there? Move it.”

Maskelyne and his team proceeded to construct a “dummy” port complete with mock battleships and submarines on an inland lake about three miles away from the real harbor. They installed real antiaircraft guns and searchlights, and rigged up remote-control explosives. The team consulted nighttime aerial photos of the actual city, and then planted lights in the sand and mud to make the fake site look as much like Alexandria as possible. Meanwhile, the real city of Alexandria went black.

Reports say that German bombers pounded the fake Alexandria (rather than the real one) for eight nights in a row. Sources agree that the ruse protected the real city from possible destruction. They disagree on one crucial factor: Maskelyne’s role in the deception.

Official records offer little information about the magician’s wartime exploits, but his ghostwritten memoir, Magic: Top Secret, tells tale after tale of battlefield prestidigitation led and organized by Maskelyne. A writer named Richard Stokes has devoted an entire website to debunking the memoir. According to Stokes, the book was Maskelyne’s most effective piece of camouflage…“ingeniously compact, built from recycled tree carcass, and weighed only thirteen ounces. And it has fooled people for sixty years.”

Prior to the 1943 invasion of Sicily, a dead man became a key player in another very effective WWII deception. On April 30, a corpse washed up on the coast of southwestern Spain. The body was dressed in the uniform of Britain’s Royal Marines. An ID found on the body identified the man as Major William Martin. Chained to the dead major’s wrist: a black attaché case.

The Nazis couldn’t wait to get their hands on that case, and before long a helpful Spanish official had given one of Hitler’s agents a look at the documents inside. They identified the dead officer as an expert in amphibious landings. His mission, seemingly thwarted, was to deliver top-secret information about Allied plans to attack German-held Greece and Sardinia. The coded letter Martin carried was addressed to Admiral Andrew Cunningham, commander of the Mediterranean fleet. It asked the commander to return Major Martin to his ship and have him “bring some sardines with him”—a rather obvious allusion to Sardinia.

Hitler took the bait, transferring troops to Greece and clearing the way for Allied forces to attack the real target. On July 10, 1943, the project code-named “Mincemeat” ended with an invasion by 160,000 Allied troops…into Sicily, not Sardinia. As for the corpse? “Major Martin” wasn’t a Royal Marine. He was a vagrant whose body had been spirited out of a London morgue for use in what became one of the most successful military deceptions ever staged. Note: Mincemeat’s planners included Charles Fraser-Smith, the real-life model for Q in Ian Fleming’s James Bond novels, and without him, the operation couldn’t have succeeded. Fraser-Smith created the container that kept the vagrant’s body “fresh” for days, until it could be dumped in the water off the coast of Spain.

On June 6, 1944, a pair of French bicyclists watched in awe as four American soldiers picked up a 40-ton Sherman tank and turned it around. “Americans are very strong,” one of the soldiers quipped. Had the U.S. Army bred a team of superhuman Captain Americas? No, they had created a top-secret unit—the 23rd Headquarters Special Troops—and manned it with a thousand artists, designers, and audio technicians. Their job was to create a deceptively realistic army division consisting of inflatable tanks, cannons, jeeps, trucks, and airplanes.

In just a few hours, the 23rd could assemble airfields filled with rubber planes, motor pools stocked with rubber jeeps, and battle formations with rows and rows of rubber tanks. To complete the illusion, 500-pound loudspeakers mounted on jeeps broadcast a barrage of combat sound effects. The 23rd’s fake-outs had a serious purpose: to divert German forces from the “real” action and give Allied troops the advantage.

Many members of the 23rd were art students, recruited from schools in New York and Philadelphia, including fashion designer Bill Blass, painter Ellsworth Kelly, and photographer Art Kane. Others were showmen, such as Captain Fred Fox, a former member of Princeton University’s Triangle Club musical-comedy troupe. Fox knew that rubber tanks wouldn’t be enough to convince the enemy. The 23rd, he insisted, must consider itself “a traveling road show” and be ready to perform “at a moment’s notice.”

The presentations must be done with the greatest accuracy and attention to detail. They will include the proper scenery, props, costumes, principals, extras, dialogue, and sound effects. We must remember that we are playing to a very critical and attentive radio, ground, and aerial audience. They must all be convinced.

And it worked. According to recent reports, the “Ghost Army,” as it was known, staged more than 20 operations over the course of the war. Their deceptions are believed to have saved between 15,000 and 30,000 American lives, and they did it all without their fellow soldiers ever knowing of their existence. The Ghost Army remained top secret until 1985—forty years after World War II ended.