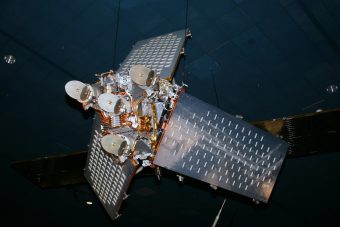 CAN YOU HEAR ME NOW?

In 1985, Bary Bertiger, an engineer with the high-tech giant Motorola, had an intriguing idea: If a company could put enough low-orbit satellites in the air to attain direct access to the entire surface of the Earth, and use that network to support a satellite telephone system, then people could use the satellite phones to make calls to virtually anywhere in the world. This was very early in the cell phone era (Motorola had released the first one only a year earlier, in 1984), and people were becoming familiar with a problem that still exists today: if you’re too far away from a cell tower network your phone won’t work. With the proper satellite network, Bertiger figured, that problem could be overcome.

Motorola chairman Robert Galvin gave Bertiger’s idea the go-ahead, and work on the project began in 1987. In 1991, it was spun off as its own company, Iridium LLC. Why “Iridium”? The plan was to put 77 satellites into orbit—and the element iridium is number 77 on the periodic table. (The number of satellites was later reduced to 66 for cost-saving reasons, but the name remained.)

It took another six years to develop the technology necessary for the project, but in 1997, Iridium started launching its satellites. A year later, amid much fanfare—and after a $180 million advertising campaign—Iridium LLC started operations. “Iridium,” said the October 1998 cover story of Wired magazine, “may well serve as a first model of the 21st-century corporation.”

But it soon became clear that there were serious flaws in Iridium’s business plan.

When Bertiger came up with his idea in 1985, cell phones were as big as bricks, nearly as heavy, and cost about $4,000. They were owned by very few people, and worked in very few places. By 1998, the technology had progressed enormously. Millions of people owned small, sleek, pocket-sized cell phones served by nationwide cellular networks, and the cost had dropped to about $200. What was Iridium offering? A heavy, boxy phone that cost about $3,000. Cost to use it: from $3.00 to $8.00 a minute. By comparison, typical cell phone charges were already down to about 10¢ a minute. But probably the worst feature of all: Iridium phones didn’t work inside buildings, under trees, or inside cars. In order to work, the phones had to have direct line-of-sight access to a satellite.

How much had Iridium spent in its 13 years of development? More than $6 billion. (Iridium had calculated that they would need a million subscribers just to break even. Impossible? No problem! Company analysts confidently predicted they’d reach that number in two years. The harsh reality: By August 1999—after nine months of operation—Iridium had just 55,000 subscribers. That same month, they defaulted on $1.5 billion in loans and filed for bankruptcy.

The 12 years of development—and the $6 billion—was toast.

At the time it was one of the largest bankruptcies in U.S. history, and it remains one of the most expensive technological flops ever. (Iridium’s single largest investor, Motorola, lost about $2.5 billion.)

Aftermath: In 2000, a group of investors bought what remained of Iridium, including all of its 66 satellites—as well as several spares that had been launched—for $35 million. The company exists today as Iridium Communications, and they have about 600,000 subscribers, many of them in the U.S. military. And while the phones are smaller, lighter, and less expensive (Amazon sells them for about $1,000), they still don’t work inside buildings.

In 2009, scientists at the University of Delaware, studied mustard plant seedlings, monitoring how quickly they sent down roots when grown next to mustard plants that were closely related to them (meaning plants grown from seeds from the same “mother” plant) as opposed to being grown next to non-related mustard plants. Result: the plants sent down roots much more quickly when growing next to unrelated plants, gobbling up water and nutrients as fast as possible. They grew roots much more slowly when growing next to sibling mustard plants—sharing the water and nutrients in the soil with them. The scientists leading the studies said they believe that the plants were able to recognize their kin via chemical signals in the soil.