The Story of “the Rock” 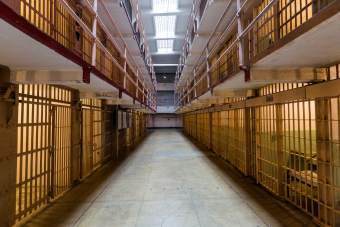 Everybody knows that Alcatraz (also known as “the Rock”) was a federal prison. But it wasn’t always just the dungeon of the notorious.

When gold was discovered near San Francisco in 1848, word spread like a virus. Seemingly overnight, the sleepy western town turned into a full-fledged city. The population exploded from about 800 people in 1848 to 25,000 at the end of 1849. The federal government, which granted California statehood in 1850, saw the rising importance of the port of San Francisco and the need to defend it. Alcatraz Island—near the Golden Gate, the entrance to San Francisco Bay from the Pacific Ocean—was the perfect place for the main military installation.

The first order of business was building a lighthouse, the first on the Pacific shoreline; it was built between 1852 and 1853, stood 166 feet high, and could be seen from 14 miles away. The light became operational in 1854, and right away, lighthouse keepers found it unpleasant to work on the island. The isolation—Alcatraz is more than a mile from San Francisco, across the frigid, frequently choppy bay—made it a lonely and boring place to live.

Meanwhile, the military set to work converting the island to the first permanent fortification on the Pacific coast. They blasted off the top of the hills to create a plateau and installed 111 cannons around the island’s perimeter. In 1864, the army added three gigantic cannons with 15-inch shells that weighed 440 pounds apiece. (Each of the cannons weighed 50,000 pounds.) The last line of defense for Alcatraz was a citadel, a fort in which soldiers could hunker down in the case of a prolonged siege. The citadel held four months’ worth of supplies for 200 men. Work on the fort finished in 1859, just in time for the outbreak of the Civil War in 1861.

ALL QUIET ON THE WESTERN FRONT

Although San Francisco was the 12th-largest urban area in the country in 1861, its distance from the main conflicts of the Civil War meant things at Alcatraz were fairly low key.

In March 1863, the Union government learned of a plot hatched in San Francisco to start up a Confederate privateering ship, which would loot and steal on behalf of the secessionist South. The ship, the J.M. Chapman, made it no farther than Alcatraz. The navy stopped the ship before it ever made it out of the bay. The privateers were arrested and brought to Alcatraz to be held until the end of the war.

By then, Alcatraz had been occasionally been used as a military prison, and continued that role through the Civil War. In 1861, four Navy sailors who refused to swear an oath of loyalty to the Union were held there. And just after President Lincoln was assassinated, 39 citizens who spoke positively about the president’s death were hustled off to Alcatraz’s basement as safekeeping against a possible riot or insurrection.

Alcatraz continued as a military installation after the end of the Civil War, but its buildings were showing their age. The government tried to modernize the island during the 1870s, but it quickly became apparent that Alcatraz’s time as defender of the Pacific coast was petering out…less than two decades after it opened.

Alcatraz’s biggest asset became its prison. Nineteen Hopis from Arizona were shipped there in 1895 for refusing to let their children attend public schools. In 1898 the prison was filled to capacity with detainees from the Spanish-American War. Finally, in 1907, Alcatraz officially became solely a military prison when the last remaining active army troops left the island.

BIGGER, BUT NOT BETTER

During its time as a military prison, Alcatraz underwent expansion. A new cell block was planned, but because it was going to be so tall that it would block the lighthouse, a new lighthouse had to be built, too. The new electric light opened in 1909. The new cell block accommodated 600 prisoners, and it was a minimum-security facility, in contrast to the supersecure federal prison that was the next (and most famous) occupant of Alcatraz.

But, as with the fort, the military prison didn’t last long. It was expensive to maintain a facility on an island; everything had to be shipped over on boats. Alcatraz’s biggest problem was that it had no freshwater source, so it was dependent on enormous cisterns that collected rainwater or water sent from shore. In 1933 the army gave the compound to the Federal Bureau of Prisons, leaving behind 32 unlucky prisoners who became the Rock’s first inmates.

TO PRISON AND BEYOND

For the next 30 years, Alcatraz was the most notorious federal prison in the United States. Criminals from Al Capone to Robert Franklin Stroud (better known as the Birdman of Alcatraz) were incarcerated there. Escape attempts from Alcatraz are legendary—one (that of Frank Morris, who’d managed to escape from several other prisons before coming to Alcatraz) even inspired the film Escape from Alcatraz. Most inmates, though, served out their full sentences on the Rock. Attorney General Robert Kennedy closed the prison in 1963.

Nobody really knew what to do with Alcatraz after that. A number of proposals were suggested, but none took hold. For a while, it looked like the government might build a memorial to the United Nations, which had been established in San Francisco, but the State Department didn’t like the idea of associating the UN with a former prison. The city tried to slate Alcatraz for commercial development, but San Franciscans didn’t go for it. They wanted the National Park Service to take control of the place.

In the midst of the squabbling, on November 20, 1969, a group of 90 Native Americans landed on Alcatraz and announced they wanted to buy it for $24 worth of beads and red cloth, referring to the price paid to a local tribe for Manhattan Island in 1626. (They actually considered this a generous offer, because an 1868 treaty between the Sioux and the United States stated that ownership of “surplus land,” which is how Alcatraz was classified, reverts to Native Americans.) The government wanted them off, but they refused to leave unless the government agreed to build a Native American cultural center and university.

The government had no such plans. Both sides dug in their heels, and there was no progress for a long time. The occupation became a cause célèbre. Jane Fonda and Ethel Kennedy visited, winning sympathy for the Native Americans. Hippies from San Francisco moved in. Graffiti appeared everywhere. The occupiers announced that they would give tours to raise money for supplies, but the government countered by saying that anyone going to Alcatraz was trespassing and would be prosecuted. Neither side would budge.

But then the leader of the occupation, Richard Oakes, left the island in January 1970 after his daughter died in a fall. Without him, the movement foundered. Negotiations went nowhere, so the government tried to force the protesters from the island by cutting off the electricity and water delivery. Three days later, fires broke out. The lighthouse keeper’s quarters, the warden’s house, the prison doctor’s home, and the social hall were destroyed. The government blamed the Indians for the fire; the Indians blamed undercover government agents. People moved off the island slowly but steadily. By June 1971, the occupiers numbered only 15. Eventually, federal marshals went to the island and removed the remaining Native Americans.

The National Park Service has been in charge of Alcatraz since 1972, and started giving public tours the following year. Today it’s a popular tourist destination—more than 1 million visitors per year take the ferry ride to the island to see the remnants and ruins of its different eras. There’s even a nighttime tour, which was recently voted the “Best Tour of the Bay Area.”