The Story of How SpongeBob SquarePants Made It to Air 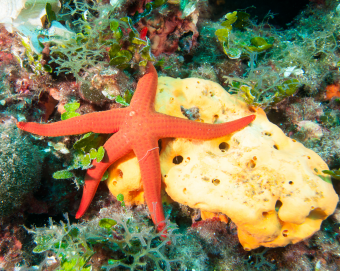 As of 2014, the SpongeBob SquarePants brand has generated in excess of $13 billion since the pilot episode was released about a decade and a half ago. But have you ever stopped to wonder how on Earth a cartoon about an anthropomorphic kitchen sponge came to exist in the first place and how networks were convinced that it could not only work, but be a worldwide phenomenon? Well the answer is that it took years of planning, being rejected for publication in comic book form, a Hawaiian shirt, and a fish tank.

According to the original creator of SpongeBob, Stephen Hillenburg, he first came up with the idea that would eventually become SpongeBob while teaching marine biology at the Ocean Institute in California in the 1980s. To help teach young students visiting the Institute about the various animals that lived in the Institute’s tidal pools, he created a comic book titled “The Intertidal Zone” that featured numerous anthropomorphic sea creatures that would serve as the basis for many later SpongeBob characters, including a main character called Bob the Sponge.

Despite the high quality of the comic, both in terms of content and art (Hillenburg majored in marine biology with a minor in art at college), it never really went anywhere, though Hillenburg did pitch it to a number of publishers. Just none of them were interested.

However, creating the comic did ignite a spark in Hillenburg who realised that he enjoyed art way more than he enjoyed marine biology. As such, he made the decision to return to college to pursue a master’s degree in animation, despite earlier reservations about art not being a smart career choice.

After graduating with a degree in experimental animation, Hillenburg met the creator of the cult show Rocko’s Modern Life at an animation festival. He subsequently offered Hillenburg a job after the two hit it off and the quality of Hillenburg’s portfolio became apparent.

While working as the director and occasional producer, storyboard artist and writer for Rocko’s Modern Life, Hillenburg met and became close friends with voice actor Tom Kenny, who would later voice SpongeBob. According to a recent interview with Hillenburg, he made the decision to cast Kenny as the voice of SpongeBob moments after meeting him.

As for coming up with the voice, Kenny was given a basic description of what kind of character SpongeBob was. He stated, “Steve described SpongeBob to me as childlike and naïve. He’s not quite an adult, he’s not quite a kid. Think a Stan Laurel, Jerry Lewis kind of child-man. Kind of like a Munchkin but not quite, kind of like a kid, but not in a Charlie Brown child’s voice on the TV shows”.  With this description, Kenny reportedly “found the voice in about 10 seconds”.

But we’re getting ahead of ourselves, after Rocko’s Modern Life ended in 1996, Hillenburg began fleshing out the idea he’d had over a decade prior and began creating what has come to be known as the “SpongeBob Bible”- a book containing all of the information, backstory and motivations of every character in the show along with series backstory and general information to keep things consistent.

While the basic premise of the show was somewhat similar to his earlier comic, Hillenburg decided to radically change the appearance of Bob the Sponge. In the comic, Bob had taken the appearance of an anatomically correct sea sponge wearing sunglasses. In the show, Hillenburg decided to give him the look and shape of a kitchen sponge that had arms and legs and wore a shirt and tie. This early depiction remained basically unchanged throughout the design process with the exception of the removal of a hat he originally had, which would later become part of SpongeBob’s uniform while working at the Krusty Krab.

While Hillenburg was conceptualising the show, he’d planned on naming the main character “SpongeBoy” and it was his plan for the show to be called “SpongeBoy Ahoy!”. (Aside: Ahoy-hoy was Alexander Graham Bell’s preferred way to answer a telephone.) SpongeBoy Ahoy fell through when Hillenburg discovered after pitching the show to Nickelodeon that “SpongeBoy” had already been trademarked as the name of a mop.

After some deliberation, he settled on the name “SpongeBob”, particularly wanting to keep the “sponge” in the name so that parents and children didn’t mistake the character for a piece of cheese. Originally “SpongeBoy” was to have no last name. However, after renaming the character, Hillenburg opted to give SpongeBob the surname SquarePants after a chance comment by Tom Kenny when Kenny said, “Boy, look at this sponge in square pants, thinking he can get a job in a fast food place”.  Hillenburg loved the sound of “square pants” when attached to SpongeBob, and also liked that it not only described the character’s attire, but also his base personality- kind of a square.

Prior to pitching the show to Nickelodeon, Hillenburg also spent significant time with Derek Drymon watching footage of characters they felt were SpongeBob-esque to get a better feel for how the character should behave. Drymon was a storyboard artist for Rocko’s Modern Life who had overheard Hillenburg discussing the potential new show and had literally chased Hillenburg down the hall to ask to join the team. In the end, according to Drymon, they based SpongeBob’s personality primarily on comedians Jerry Lewis and Stan Laurel, as well as Pee-wee Herman.

When the time came to pitch the show in 1997, Hillenburg pulled out all of the stops. As Eric Coleman, the Vice President of animation development and production at Nickelodeon, would later note, “pitch meetings can vary dramatically” and there’s no real right or wrong way to do it, since, to him at least, the pitches are mostly about getting “a sense of the creator as a talent”. That said, he would also later be quoted as saying that Hillenburg “really went above and beyond”. So what exactly did he do?

Well, to start with Hillenburg spent weeks painstakingly crafting a tiny version of the Bikini Bottom set complete with little squeezy models of the characters, all housed inside a large aquarium he covered with a sheet and wheeled into the meeting room. To complete the scene, Hillenburg and Drymon each donned a garish Hawaiian shirt and walked into the room blaring Hawaiian music. During the meeting, the pair described all the characters and gave a rundown of their agreed upon pilot episode, Help Wanted, in which SpongeBob applies for and successfully gets a job.

The gathered executives who watched the initial pitch have variously described it as “pretty amazing” and something “they wish they had on tape” over the years and it’s noted on the DVD commentary for the episode that two of the executives, Albie Hecht and Kevin Hay, had to leave the room to compose themselves because they couldn’t stop laughing- a good sign that Hillenburg and Drymon’s elaborate pitch had worked.

After the pitch was over, Drymon stated, “…they walked out of the room to discuss it. We figured they would fly back to New York and we’d hear in a few weeks. We were surprised when they came back in what seemed like minutes and said they wanted to make it…”

After only a few minutes of deliberation, the executives greenlit the show and gave Hillenburg and co a little money to create the pilot, which when eventually screened, had such an impact on the gathered group of executives that, according to the president of Nickelodeon Cyma Zarghami, “their immediate reaction was to see it again, both because they liked it and it was unlike anything they’d ever seen before”.

Needless to say, the show was granted more than just a little money for a pilot and when it hit the air waves, it was a hit- perhaps a little surprisingly, not just with kids, but adults as well.  By its third season nearly 20 million of the 50 million viewers of the show that season were adults. Billions of dollars, numerous awards, nine seasons and two successful feature length movies later, the franchise is still going strong.