The Curious Case of Poop Transplants

October 23, 2015 TheMedicineJournal.com
This is yet another great article from our friends over at The Medicine Journal.  Check out their YouTube channel here! 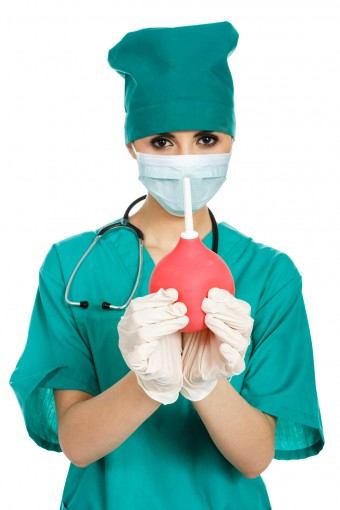 Taking another person’s feces and shoving it up your bum doesn’t seem like a worthwhile medical procedure, but in reality, this form of defecation sharing can save someone’s life. So drink some coffee, eat a bran muffin and read on to find out all about poop transplants. You too might be able to use your morning stool for the good of mankind.

Known as Fecal Microbiota Transplantation (FMT), the poop transplant isn’t as modern as you might think. It can trace its roots back to 4th century China where they used it for treating food poisoning and severe diarrhea. In the 16th century, the Chinese physician, Li Shizhen, used fresh, dried, or fermented feces to treat a number of abdominal diseases. He called it “yellow soup”. (Eat your heart out Campbell’s Chunky Chicken!)

More recently the procedure has gained prominence because of how well it treats the rapidly growing problem of Clostridium difficile infection (C diff.) The gold-standard of treatment used to be giving someone with the affliction oral antibiotics, specifically Vancomycin. Unfortunately, Vancomycin alone has a cure rate of only 23%-31%. FMT’s success rate in treating C diff. is 81% after the first administration and 94% after the second.

Medical science hasn’t yet identified all of the specific types of bacteria, or what every ones’ particular role in the body is. What we do know is that every person has between 15,000 and 36,000 different bacterial species flourishing inside them, often in a symbiotic relationship.

You see, the environment within your GI tract is a complex, yet balanced, system that helps breakdown many of the nutrients we take in. The various microbes’ digestion of nutrients helps with everything from developing our immune systems and repressing the growth of harmful microorganisms, to breaking down Oligosaccharides, the sugar molecules found in beans (and other fibers) that give you gas.

When specific types of bacteria are missing from your digestive system, and therefore their beneficial results, various diseases can begin to present themselves- things like C diff., irritable bowel syndrome, Crohn’s disease, and ulcerative colitis to name a few. The idea behind FMT is that, should someone have a condition where they might be lacking in certain types of beneficial bacteria, taking healthy poop from someone who does and putting it in their GI tract might help by reestablishing the missing microbes. Those bacteria will then (hopefully) grow and proliferate, thereby hopefully curing the individual of their affliction.

Current medical literature has shown there has been a quick rise in GI problems around the world, particularly in developed countries where antibiotics are frequently used. The global epidemic of GI issues like C diff. has been long known to be a result of taking said antibiotics. Dr. Maria Olivia-Hemker of John’s Hopkins Children Center states; “Antibiotics are lifesavers, but anytime we give them to a patient to eradicate one pathogen, there’s collateral damage, in that along with the bad bacteria we wipe off some good organisms that help keep the complex workings of our gut in perfect balance.” This ideology is also why many doctors advise taking probiotics after any antibiotic administration.

One of those bad bacteria that can propagate, should it not be kept in check, is the aforementioned Clostridium difficile. This murderous microbe can cause symptoms like watery diarrhea, fever, loss of appetite, nausea, and abdominal pain. The CDC estimates C diff. affected about 500,000 Americans in 2011. Of those, about 29,000 of them died within 30 days of their initial diagnosis.

The first randomized study on treating C diff with FMT was published in Jan of 2013. As mentioned, it showed an 81% resolution of C. diff. associated diarrhea after just the first infusion. These amazing, life-saving results made the medical world take notice.

Never being ones to let anything in medicine go without their reviewing it, three months later in April, the FDA classified fecal transplants as both a biologic material as well as a drug. In this case, a new investigational drug. As such, it meant only doctors with an approved investigational drug application could perform the transplant. As you can imagine, there was a crap-load (pun intended) of physicians and patients that opposed this position, given the relative safety of transplanting fecal matter from a healthy, non-diseased individual, to another.

The FDA almost immediately reversed their stance and in June of that year, stated any qualified physician could perform the procedure if they got signed consent forms from their patients, and they tested the donor stool.

While it may seem asinine to classify poop as a “new investigational drug”, the FDA does have a point. There hasn’t ever been a large-scale, controlled trial showing any effect beyond restoring the diverse microbiota within the gut. Most doctors will tell you there needs to be more research demonstrating exactly what effects changing the complex make up of your bowels will have on overall health.

For instance, one follow-up study done by Dr. L. Brandt and his colleagues showed that, while the 77 patients in the study had no new C diff. infections, 4 of them presented with new disorders- peripheral neuropathy, Sjögren’s disease, idiopathic thrombocytopenic purpura, and rheumatoid arthritis. In 2011, a 32 year old women, very oddly, suddenly became obese after being treated with FMT.

These disorders might seem like they have nothing to do with your feces, but given there are so many bodily functions and disease processes that can be affected by your gut bacteria, the findings only emphasizes the point- more research should be done before we just start taking poop-pills like its candy.

That being said, on that same point, the lack of a healthy digestive environment is linked to several types of illnesses, and as such FMT has been proposed as a potential treatment for conditions like obesity, metabolic syndrome, diabetes, multiple sclerosis, Parkinson’s, rheumatoid arthritis, chronic fatigue syndrome, irritable bowel syndrome, ulcerative colitis, and Crohns disease.

If you think you might want help someone out and take a dump in a petri dish during your next doctors’ visit? Don’t worry, there’s an organization out there helping make it possible. Called OpenBiome, this non-profit stool bank aims to make FMT easier, cheaper, safer and more widely available. They do this by providing hospitals with screened, frozen material ready for clinical use. They’re currently providing over 400 healthcare institutions around the United States and Europe with healthy fecal matter.

More research and technological advances will undoubtedly show doctors what exactly the countless species of bacteria specifically do for our health and well-being. Until then, what we’re finding out is that introducing good bacteria in the form of people’s poop is saving lives.