January 13, 2015 Melissa
Soshi K. asks: What do cockroaches eat and where do they live when not in our houses? 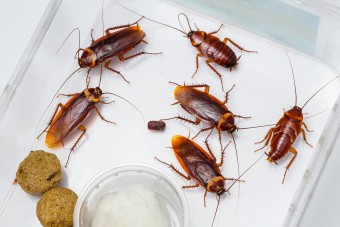 Of the 5,000 known species of cockroaches, those that most plague people are the American cockroach (Periplaneta Americana) and the German cockroach (Blattella Germanica).

Americana is the largest cockroach encountered in human constructions, growing to an average length of 1.5 inches (4 cm); it is not common in homes in the northern U.S., preferring a warmer environment, although it will be around – especially in larger, particularly commercial, buildings like grocery stores and restaurants.

Unlike their German counterparts, the American cockroach will live outdoors (in warmer climates), and in places like Florida, they can be found around garbage, in trees and in woodpiles. During periods of heavy rains, this species is known to “mass migrate,” and overrun a building. The bugs are managed around homes by caulking cracks, removing rotting vegetation and keeping areas around the structure as dry as possible.

Indigenous to Africa, the American cockroach was introduced across the pond in the 17th century and is usually found below ground in drains, steam tunnels, sewers and basements. Prolific, one community of Americana that was discovered in a single sewer manhole consisted of 5,000 members.

On average, each female of the species will produce 150 eggs over a 10-month period and will deposit them, in clusters inside a hard-shelled case, near a food source – sometimes “gluing” the case to the source with her spit.

After hatching, the American cockroach goes through several stages of development, but during each it actively forages for food. Opportunistic, they enjoy whatever is at hand and will eat decaying matter, as well as bread and fruit, paper and clothes, hair and even shoes.

Because of their proclivity for sewers and human waste, the American cockroach spreads over 22 species of organisms that cause disease in humans, including protozoans, viruses, fungi and bacteria, as well as several species of parasitic worms.

Americana’s cousin, the German cockroach, is the jerk you’ve probably met at one point or another if you’ve ever had a cockroach problem in your house. Adults of this species reach on average about 0.5 inches in length (10-15 mm).

Secretive, the German cockroach spends most of its time (about 75%) in hiding. This is likely due, at least in part, to the fact that Germanica cannot live without humans and our modern comforts. So if they didn’t stay hidden, they’d quickly find themselves squished in most homes. In fact, at least one study has shown that the species will die out in the winter in northern climates in homes that do not have central heating.

Inside of a residence, the German cockroach lives in large groups, clustered in dark places often in the kitchen; favorite haunts include the walls and cabinet voids as well as under and behind the stove, dishwasher and refrigerator. They find each other by scent, which comes from the poop that they deposit in set areas (called “fecal focal points”). Like its American counterpart, this species eats pretty much anything it can sink its mandibles into, although they particularly love garbage, sweets, grease and meat.

Females of the Germanica species hold onto their egg cases for far longer American cockroaches and only drop them within 24 hours of the eggs hatching; additionally, each case has more eggs, holding anywhere from between 30 and 48 at a time. A single female of the species can produce over 200 eggs within her lifetime, and according to Penn State University’s College of Agricultural Sciences, “in one year over 10,000 descendants can be produced…”

As with its cousin, German cockroaches go through many stages of development, although from the time they hatch (appearing in nymph form), they also forage for food. Continuously breeding, any particular community of this species will usually be comprised of only 20% adults and about 80% nymphs.

Since Germanica also transports pathogens, things like diarrhea, food poisoning and dysentery may be transmitted to humans where there is an infestation. In addition, the German cockroach’s excrement as well as its molted skin (with both species, each stage of development is marked by molting – or a sloughing off of the old skin), have been known to cause allergic reactions in some people, including triggering asthma and the development of skin rashes.

German cockroaches are notoriously hard to get rid of due to their secretive nature and prolific fertility. Nonetheless, preventative measures such as maintaining a fastidiously clean home (e.g., not leaving dirty dishes out overnight), storing food items in bug-proof containers and emptying garbage cans frequently can greatly help.

Common methods of killing the German cockroach include using chemicals like hydramethylnon and fipronil, as well as shaking poisonous dusts like boric acid into the crevices and spaces where they congregate (although be careful, these can be toxic for children and pets). Surprisingly, the entomologists at Penn State University say that foggers not only don’t work, they may make the problem worse by temporarily dispersing the roaches, only to have them return later.