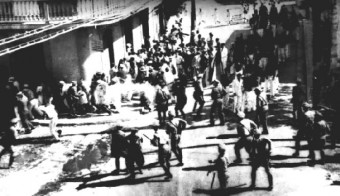 In March 1937, several days before Palm Sunday, Puerto Rican Nationalists in the city of Ponce obtained permits for a parade and demonstration. The former was to commemorate the end of slavery in 1873 while the latter was to protest the detention of one of their leaders, Dr. Pedro Albizu Campos. Ponce’s mayor, José Tormos Diego, granted the permits.

Campos had been involved, along with other Nationalists leaders, in violent clashes with authorities during the previous few years. He had been convicted of sedition and was being held pending appeal.

Under the jurisdiction of the United States after the Treaty of Paris of 1898, Puerto Rico was controlled, in large part, by Americans. Between the Foraker Act of 1900 and the Olmstead Amendment of 1909, administration of Puerto Rican affairs fell to an executive branch that was designated by the President of the United States. At the time of the massacre, the governor of Puerto Rico was General Blanton Winship, appointed by President Roosevelt in 1934 to quell the growing nationalist movement:

The United States opted to face this situation [the growing popularity of independence] with the militarization of the Puerto Rican government. With this purpose, Blandon Winship was named governor . . .[and] linked directly to the U.S. armed forces.[i]

Winship objected to the planned Ponce demonstration and ordered the Insular Police, a state police created and controlled directly by the US-appointed governor, to work with the mayor to stop it. Without notice to the organizers, the permits were withdrawn.

Under orders from Winship, 200 members of the Insular Police, armed with riot gear, confronted the protesters. According to reports:

As Puerto Rico’s national song “La Borinqueña” began playing, the demonstrators started marching. The police fired at them from four different positions for over 15 minutes killing 17 men, 1 woman, a 7-year-old girl, wounding over 235 and arresting over 150 armed protesters.

Initial reports conflicted, and many claimed the protestors fired first. According to a contemporary New York Times report:

In the accounts of civilian witnesses as well as in those of the police there is agreement that the shooting was first started by the Nationalists . . .[ii]

The Sunday battle was started, police said, when Nationalists fired on police assigned to prevent them from holding a mass demonstration which had been banned by city officials.[iii]

Many in Puerto Rico challenged these claims and outrage was beginning to show. El Imparcial described the events:

Liberty was never able to be bought but by the price of blood honorably shed. That is how these young men paid, with their lives . . . .Puerto Rican society, horrified, calls the event: THE PONCE MASSACRE![iv]

As the rhetoric heated up, responsibility for the bloodshed was placed at the feet of Governor Winship and his cronies:

The educated city of Ponce was, yesterday Palm Sunday, witness to the coldest massacre that history can know . . . The list of dead speaks for itself. We hold responsible the government of the United States in having ordered, through its armed institutions, the assassination of an entire town. We demand that responsibility be held for this horrendous crime . . . . [v]

Leaders in the Puerto Rican community took matters into their own hands and formed the Commission of Inquiry into the Causes of the Ponce Massacre. Its members included Arthur Garfield Hays, one of the founders of the American Civil Liberties Union (ACLU).[vi] The commission scrutinized the evidence including:

The photograph shows the defenseless cadets [protesters], hemmed on by all sides by heavily armed police. The thought occurs as to why the police took such a formation, if their endeavor was to disperse the cadets. Not only military rules as shown by testimony, but simple common sense, would seems to suggest that plenty of room be left for escape.[vii]

Ultimately, the commission’s report was a damming condemnation of the Insular Police and Governor Winship:

1. The facts show that the affair of March 21st in Ponce was a “MASSACRE.”

2. Civil Liberties have been repeatedly denied during the last nine months by order of Governor Blanton Winship. He has failed to recognize the right of free speech and assemblage. Force has been threatened toward those who would exercise these rights.

3. The Ponce Massacre was due to the denial by the police of the civil rights of citizens to parade and assemble. This denial was ordered by the Governor of Puerto Rico. . . .

5. The people demand and have a right to free speech, free assemblage and to petition by parade for a redress of grievances. The Commission is hopeful that Governor Winship will make a public proclamation of his willingness to abide by constitutional guaranties.[viii]

Governor Winship remained defiant. During a military parade in Ponce in July 1938, Nationalists attempted to assassinate him, although their shots went wide.

In 1937, Marcantonio launched a concerted campaign to remove Winship . . . . During an appointment with Roosevelt, he charged that Winship’s administration was characterized by “graft, crime, and corruption” and presented evidence . . . . On May 12, 1939, Roosevelt removed Winship as Governor.

Despite being removed from office, neither Governor Winship nor any of his cronies were charged or convicted in the murders of 19 people.

Reports on the Ponce Massacre: How the Press Protected U.S. Government Interests (Rodriguez-Pérez)