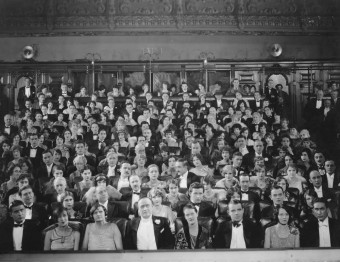 Due to copyrights, this is about as close as we could get to an appropriate picture… it was either this or whip out some playing cards and snap a photo of a full house. 😉

Nothing makes you feel older than finding your son watching the very show you watched as a child:  Full House.  Worse is telling him his mother pined away over John Stamos and plastered my walls with his posters as a teen.  His response?  ‘That’s creepy, Mom.’

Full House was an American hit TV show that aired on ABC for eight years, (1987-1995), featuring a man whose wife had died, raising their three girls in a house he shares with his best friend and brother-in-law.  The show was initially supposed to have a 9th season on the WB network after being dropped from ABC, but it never came to be.  The 8th season of Full House was its last, and many remember the show fondly, minus the annoying laugh track.  The show was a hit with our pop culture and still plays on television today.  Without further ado, we give you 10 interesting Full House facts you probably didn’t know:

1) Dave Coulier, who played “Uncle Joey” on Full House, claims that Alanis Morissette’s hit song “You Oughta Know” was written about him.

Coulier and Morisette dated for a brief period in the early 1990s shortly before Morissette began working on her breakout album Jagged Little Pill.  When Coulier first heard the song on the radio, he said he thought:

Wow, this girl is angry… Oh man, I think it’s Alanis… I listened to the song over and over again, and I said, “I think I have really hurt this person.”

Directly before dating Morissette, Coulier got divorced from Jayne Modean, who played “grown up Michelle” in one episode in season 3 of Full House (Those Better Not Be the Days).  The two married just four months after meeting on the show.

2) Full House was originally supposed to be a show where a group of comics all lived in the same house.

Jeff Franklin, the creator of Full House, modified the theme slightly to make it more of a family show when he heard that ABC was looking for a show something in the vein of The Cosby Show.  When the switch was made, the character that would eventually become Uncle Jesse was made into a musician, rather than a comedian, as had originally been planned.

Hard to believe, but he stands by the claim.  The actor says he flips the channel when the show comes on because he can’t stand the sight of his hair.  “It’s so gosh darn ridiculous. Why Didn’t anybody tell me that was going to haunt me years later?”

Another interesting Uncle Jesse factoid is that the character was originally going to be named “Adam Cochran”, but the name was changed to Jesse Cochran shortly before the pilot.  After the first season, owing to his Greek heritage, Stamos asked that the last name be changed to Katsopolis.

4) The theme song for Full House was co-written and performed by the same guy who helped compose the theme songs for Perfect Strangers, Family Matters, and Step by Step.

The man was Jesse Frederick who, along with Bennett Salvay, composed all four of those iconic TV show theme songs.

5)      The Olsen Twins, who took turns playing toddler Michelle, appeared in the same scene only four times in eight years, including the final episode.

The sisters made their major acting debut on Full House at 9 months, reportedly getting the role as they were the only babies during casting that didn’t cry.  They mostly filmed scenes apart on the show, subbing for the other when it was naptime or when one was too fussy.  You can tell the two apart by the freckle Ashley has under her nose and that Ashley is right handed and Mary-Kate left. The two wore fake teeth at certain points to keep their smiles looking the same as they grew. If you’re wondering, Ashley is also older by a whopping 3 minutes.

6)      Lori Loughlin, who played Becky, was only supposed to be on the show for six episodes.

This changed after producers really liked Loughlin’s performance and the dynamic between Loughlin and the Tanner girls, providing something of a mother figure for them.

Also, contrary to what is often said in the tabloids, Stamos and Loughlin never hooked up in real life.  Loughlin  says their “timing was off, and it wasn’t something that entered their minds at the time.”  Loughlin was married during her stint on the show, and after she divorced, John found love with Victoria’s Secret model Rebecca Romijn, marrying her, then divorcing six years later.  Stamos and Loughlin did manage to marry on-set, and Stamos claims he was her “first”…  Tweet, that is.  She joined twitter in recent months @loriloughlin -Stamos was the first to congratulate her.

However, the house used for exterior shots on Full House was located at 1709 Broderick Street in San Francisco.  The set for Full House was at Warner Brothers Studios in Burbank, California.  Other things that have been filmed on that same soundstage include Wonder Woman, Homefront, and Scarecrow and Mrs. King.

Sweetin married a police officer at 20 and soon, unknown to him, became a drug addict, particularly fond of meth, which she eventually used daily.  What got her into drugs?  She says she was unemployed and bored.

Her drug use led to an ugly custody battle over her daughter, where Sweetin found herself  limited to supervised visits.  She wrote a memoir about her extensive drug use titled UnSweetined, where she owns up to using meth, ecstasy and plates of coke.  Excerpt:  “I was just so tired. Tired of lying.  I went back to my hotel room and buried my face in my hands. I couldn’t keep doing this. It had to end.  But, not today.  I wiped away tears and finished the baggie of coke.”

Eventually members of the cast of Full House, including Bob Saget, John Stamos, and the Olsen twins staged an intervention.  She later checked into a six week rehab program at Promises Treatment Center and apparently has been clean ever since and is even acting again.

A F#$!ing lot.  The comedian and long-time host of America’s Funniest Home Videos (1989-1997) talks like a truck driver.  If you’ve not watched one of his stand-up routines… let’s just say it’s a huge contrast from the squeaky-clean, wholesome Dad we grew to know on Full House.

John Stamos spearheaded the task of bringing the cast back together for the sitcom’s 25-year anniversary in September of 2012, a gathering attended by everyone except the Olsen twins.   Not exactly a FULL house.  No reason for their absence was given, but chances are they were too busy swimming around in their vault of money- with a current estimated networth of about $300M between the pair- largely from their fashion empire. (In 2012 they even won the CFDA’s Womenswear designers of the year award.)