Where Did the Word “Assassin” Come From?

Chris Klick asks: Why is someone who murders a prominent person called an “assassin”. Where did this word “assassin” come from? 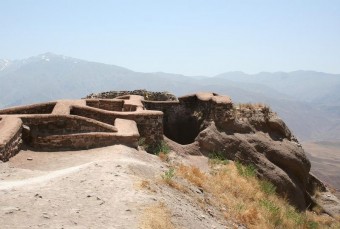 Ruins of the fortress at Alamut

The word “assassin” derives from a secretive murder cult in the 11th and 12th centuries called the “Hashishin”, meaning “hashish eaters”.  While much of the origin of this cult has been lost, the original leader was Hasan Ben Sabah, a prominent devotee of Isma’ili beliefs.  Hasan’s group was a cult of the Isma’ili sect of Muslims.

The name itself is from a possibly fabricated tale (perhaps fabricated by enemies of the Hashishin, as a way to explain how Sabah got his followers to be willing to be sent to their deaths so readily) that Hasan would have men kidnapped and brought to his strong hold.  There, they were drugged up with hashish and put into a hypnotic state.  After this trance-like state was induced, the men were offered sensual pleasures- beautiful handmaidens and harem girls and made to believe they were in heaven.

When they came out of the trance, they were sent out on gangland-type missions.  The men were told that if they attempted to kill prominent targets and things went sour, they would be given a quick return trip to paradise in order to make them fearless in their mission.

The name for these Isma’ili seems to have been given to them in a derogatory sense, not unlike similar terms today such as “pot heads”, “stoners”, “junky”, “crack head”, and the like.  Basically, it was a name given to them as a way to refer to them as “rabble”, “outcasts”, or “disreputable people”.

Beyond the legend, we know that this group of assassins had their main stronghold in Alamut (in northwestern Iran). At this stronghold, Sabah ran his secret society of assassins.  The order itself had five levels, the Grand Headmaster (originally Sabah); Greater Propagandists; Propagandists; Rafiqs; and Lasiqs.

The lowest order of the group, the Lasiqs, were the ones trained as assassins.  They were not just mindless people going around trying to kill people.  They were athletic individuals, highly trained in combat and the art of disguise, and generally extremely well educated and intelligent so that they could seem in place even among the elite of society among various cultures.

The general belief among this group was that killing a few top individuals was much more agreeable than fighting wars that cost so many thousands of lives.  The followers themselves are thought to have believed they were on a jihad, with Sabah holding the master plan for their holy war.  Whatever his true plan and motives, Sabah used his assassins liberally to murder various leaders and also took money for contract killings, supposedly so long as it fit with the master plan.

This group of killers became renowned and feared as expert assassins, seemingly able to penetrate anywhere at any time.  They didn’t just kill, but also extorted money using the threat of, “Pay up or we’ll send the Hashishin!”  They weren’t always just looking for money, though, they often influenced events by doing things such as leaving poisoned daggers in the floor next to beds of sleeping leaders with notes giving them instructions on what the Hashishin (or those who paid them) wished them to do, or else the next time the dagger would be planted in their breast, and things of this nature.  There are accounts of them even doing such things with guards posted outside of the sleeping chambers of leaders, yet the Hashishin still seemed to be able to get in and out undetected.

Despite their reputation as ruthless assassins, the group generally took special care not to harm anyone but their target in their killings, and particularly avoided killing commoners or other innocent bystanders-  hence the close association with only killing prominent people, which today the word “assassin” is so closely tied to.  You murder Joe Smith and you’ll just be called a murderer.

They finally met their match when it is thought they attempted to kill Möngke Khan.  The Mongols then set about sending their forces against the various Hashishin strongholds and they were finally defeated at Alamut in 1256, though later re-took it, only to lose it again.  While their strongholds were gone and the society more or less finished, members of the cult still operated somewhat independently for another century or so after the group as a whole was crushed.

The word “assassin” first popped up in English around the 16th century via French and Italian from this Arabic word “hashishin”, meaning “hashish eaters”, which at that point was the commonly accepted name of the legendary Isma’ili group of assassins which had long been wiped out.