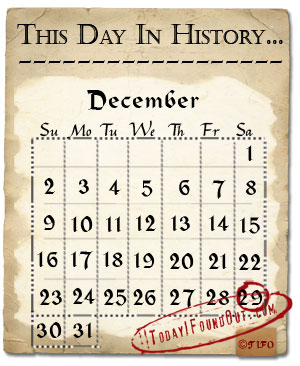 On this day in history, 1890, the Seventh Cavalry opened fire on a Lakota Native American encampment with four rapid fire Hotchkiss guns, killing 150-300 of the group, including women and children. Along with the dead Lakota, around 25 of the cavalry troops themselves were killed with another 39 wounded, largely due to friendly fire, particularly from the Hotchkiss guns.

The incident began innocently enough the day before when Major Samuel M. Whitside (who would later become a General) and the members of the Seventh Cavalry he had with him encountered a group of armed Lakota Indians. Tensions were very high at the time between the Native Americans and U.S. Army due to a variety of factors including the “Ghost Dance” spiritual movement under the prophet Wovoka, as well as the killing of Chief Sitting Bull just 14 days earlier at his home by U.S. officers. In addition to this, General Nelson Miles just ten days earlier had sent a telegram to Washington D.C. describing part of the reason for the unrest among the Native Americans: “The difficult Indian problem cannot be solved permanently at this end of the line. It requires the fulfillment of Congress of the treaty obligations that the Indians were entreated and coerced into signing. They signed away a valuable portion of their reservation, and it is now occupied by white people, for which they have received nothing. They understood that ample provision would be made for their support; instead, their supplies have been reduced, and much of the time they have been living on half and two-thirds rations. Their crops, as well as the crops of the white people, for two years have been almost total failures. The dissatisfaction is wide spread, especially among the Sioux, while the Cheyennes have been on the verge of starvation, and were forced to commit depredations to sustain life. These facts are beyond question, and the evidence is positive and sustained by thousands of witnesses.”

Once Major Whitside and company encountered the band of Lakota, they escorted them back to the Lakota encampment around five miles away near Wounded Knee Creek. Shortly thereafter, another detachment of the seventh cavalry under Colonel James Forsyth arrived taking over command and having his troops surround the camp, making 500 armed soldiers with four rapid fire Hotchkiss guns surrounding around 350 Lakota, about half of which were women and children. The soldiers then attempted to take the Lakota’s weapons, encountering little resistance at first. What happened next isn’t entirely clear.

Survivors of the massacre claimed that one of the members of the Lakota, Black Coyote, was asked to give up his rifle. However, because Black Coyote was deaf, he didn’t understand what the solder was telling him and didn’t understand why the soldier was trying to grab his rifle from him, so held onto it. As the two were struggling for the rifle, it went off, resulting in the surrounding Seventh Cavalry members opening fire on the Lakota immediately. Members of the cavalry claimed that it was the Lakota who started the fight, but most historians think this unlikely as they were vastly outnumbered, drastically outgunned, and many had been disarmed by the time the shooting started. Further, had they wanted to fight, they likely would have begun the fighting before the major portion of the cavalry arrived with their heavy artillery. However, another account claims that the medicine man, Yellow Bird, performed a Ghost Dance, which resulted in the Lakota believing their shirts were made bullet proof (as was prophesied would eventually happen) and five of the Lakota took up arms and began firing at the soldiers. General Nelson Miles backed up the first story, though, stating that the scuffle started when two soldiers tried to take a rifle from one of the Lakota, resulting in the gun accidentally firing into the air, at which point the soldiers opened fire.

Whatever the case, because many of the Lakota already had their guns taken away and they were vastly out-gunned and out-numbered, the main portion of the “battle” was over within a few minutes. Interestingly, the soldiers who opened fire surrounding the camp were not only indiscriminate about whether they were killing men, women, or children of the Lakota, but they also seem to not have bothered too much with the fact that many of their own soldiers were interspersed throughout the camp. As Captain Edward S. Godfrey stated: “I know the men did not aim deliberately and they were greatly excited. I don’t believe they saw their sights. They fired rapidly but it seemed to me only a few seconds till there was not a living thing before us; warriors, squaws, children, ponies, and dogs…went down before that un-aimed fire.”

Chief American Horse described it thus: “There was a woman with an infant in her arms who was killed as she almost touched the flag of truce…A mother was shot down with her infant; the child not knowing that its mother was dead was still nursing…The women as they were fleeing with their babies were killed together, shot right through…and after most all of them had been killed a cry was made that all those who were not killed or wounded should come forth and they would be safe. Little boys…came out of their places of refuge, and as soon as they came in sight a number of soldiers surrounded them and butchered them there.”

What made this massacre even more horrifying was that many of those who fled the battle field were subsequently hunted down and killed by members of the cavalry, even though many were unarmed. In addition, women and children were found killed as much as two miles away from the battle field.

In the aftermath, Colonel Forsyth was relieved of his command, but later reinstated after a Court of Inquiry exonerated him of responsibility and he was eventually promoted to Major General, despite General Nelson Miles denouncing him and claiming Forsyth had deliberately massacred the Indians without provocation. The Army also subsequently awarded 25 soldiers with a “Medal of Honor” for their heroic actions in the massacre, including some who were specifically honored in their citations for their bravery in pursuing the fleeing Lakota Indians after the massacre.