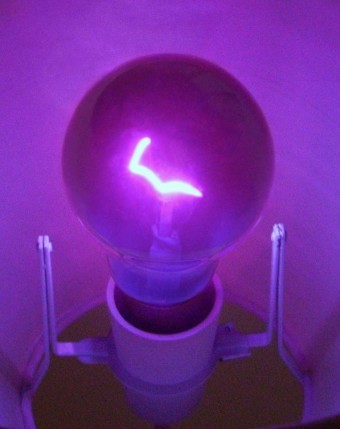 Today I found out why black lights make things glow.

Black lights are not that different from any other type of light, whether incandescent, fluorescent, or just the age old candle flame. The difference is that black lights emit most of their light waves just outside the range humans can perceive, in the Ultraviolet (UV) part of the spectrum. When a UV light wave hits an object containing substances known as phosphors, those phosphors will naturally fluoresce, and glow.

This glow is created by the special way phosphors use the energy from UV light. When a photon from UV light hits the phosphorous material, it causes the electrons to get excited and stray farther from the nucleus than they normally would. When the electron falls back to its normal state, some of the energy is lost in the form of heat. When the UV light wave is reflected back to your human eyes, it now has less energy, therefore a shorter wavelength. This wavelength is in the range that we can “see”. The end result being, you cannot see the majority of the light coming from the source, but you can see its reflection off of objects containing phosphors.

Light is merely electromagnetic radiation. Electromagnetism is one of the four fundamental forces in the universe, the others being gravity* and the nuclear weak and strong forces  This “light” radiation comes in many forms you probably recognize, from the long wavelength (low frequency radio waves, microwaves, and infrared waves), to the shorter wavelength (higher frequency ultraviolet waves, x-ray waves, and Gamma-ray waves). Right in the middle of these is a sliver of the spectrum that we can see with our human eyes, namely visible light waves.

The construction of bulbs that create UV light is fairly simple, though there are several different ways to go about making “black lights”.

A normal Fluorescent bulb creates light by channeling electricity through a conductive inert gas. They add a small amount of mercury inside the tube, or bulb, that will give off light photons when energized. Only a small amount of the light is in the visible spectrum. Most of what is produced is already in the UV range. To get the visible light out of the bulb, a phosphorus coating is applied to the glass and reacts to the UV waves and creates the visible light hospitals everywhere are famous for!

For black-lights, there are two main designs most commonly used. The “tube black light” is very similar in design to a standard Fluorescent bulb. The main difference is in the phosphorus coating. Instead of creating light in the visible spectrum, the coating absorbs harmful UV-B and UV-C light waves and creates UV-A waves. “Black” glass tubes will naturally block out the small amount of visible light created by the energized mercury so that most of what comes through is UV light and a small amount of visible wavelengths of light that are the closest to the UV spectrum, those being shades of dark blue and violet.  This is why black lights appear to be a shade of purple to the naked eye.

The second type of common black-light is and incandescent black light bulb. These work more or less the same as any standard household incandescent bulb. The difference between the two is the filter that is added to the bulb. All of the light that is created by the heated filament is filtered out, except those waves in the infrared and UV-A spectrum.  The filter absorbs the rest, which is why this type of black light tends to get extremely hot, even for an incandescent bulb, and has a short lifespan.

So whether you want to throw a “Rave” and know for sure who’s been brushing their teeth, or check your hotel sheets for blood, urine, and semen, black light is a phenomenon that everyone seems to enjoy! So shut off all the visible light sources and let the black light show you what you most likely never wanted to see!

*This is not the venue, but don’t get me started on gravity. It’s not a fundamental force. I personally have spent several years doing research on this very subject, as have numerous others, so I’m not just saying that off the cuff. But considering the owner of this site, Daven, only allows me to publish things here that are hard fact, at least as far as we “know” today, and that I’m sure most here don’t want to wade through pages and pages of mathematical formulas and abstract concepts in an article that’s supposed to be about black lights to see if my supposition holds water, I’ll save my “gravity is not a fundamental force” arguments for more appropriate venues.  Just know that it would not be at all surprising if within our lifetime it is proven conclusively that gravity is not a fundamental force.  When this is proven, I’ll be editing this article with great ebullience. 😉