This is a Sponsored post written by me on behalf of Cooper Tires for SocialSpark. All opinions are 100% mine. 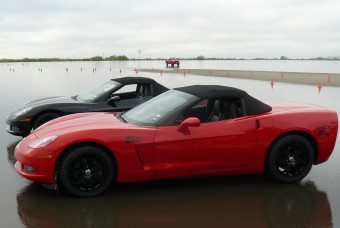 The two Corvettes, the black with the BFGoodrich Tires, the red with Cooper Tires

You may have noticed last week that I didn’t post any articles written by me and there weren’t quite as many posts all around as you may have come to expect if you follow this site regularly, which you should as learning new things every day is good for the long term health of your brain.  Plus, you’ll never be want of something to say at cocktail parties.  There’s really no downside here. 🙂

The reason why I wasn’t around was that I decided to go against my normal rule and step away from my computer, venturing out into something called “outdoors”, attending the Cooper Tires #RideNDrive event in San Antonio, Texas.  Lucky for me, the peculiar glowing orb in the sky I encountered while out of doors was covered by a water vapor layer for about half the event, therebye helping to minimize my exposure to so-called “natural” light. (I’ll stick with light bulbs and the glow of my computer screen thank you very much.)

In any event, Cooper Tires offered to fly me down and let me extensively test out some of their tires compared to equivalent (in terms of target utility and price range) BFGoodrich tires. Specifically, they let me race around Mustang GTs and Corvettes on their 1,000 acre vehicle test center, racing the cars on wet and dry tracks at purposefully extreme speeds in order to put the tires through their paces (ultra high performance, all-season Zeon RS3-A and the ultra high performance, summer RS3-S). They also let me test out some tires on Chevy Tahoe SUVs on the wet track and on Jeeps in a variety of extreme off-road conditions.  In both cases, the vehicles were equipped with the Discoverer A/T3 all terrain / all-season tires, which incidentally was recently rated by Consumer Reports as the “number one ranked all-terrain SUV and pickup tire”. 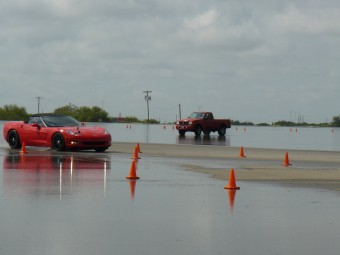 Racing the Corvette on the wet track with the cone fixer in the truck. 🙂

Needless to say, they had me at “racing a Corvette on a track”.  There was also some riding around on the tracks with a couple professional drivers, including IndyCar driver and three time winner of the ALCAN 5000 rally, Johnny Unser, which resulted in one individual getting quite nauseous (not me, thankfully) from flying around the track at pretty amazing speeds.  The one person ultimately had to sit out for about half one of the day’s events because of his trip around the track with Unser. 😉  All of this was every bit as fun as you might imagine, despite occurring outside, and is something I highly recommend you try at some point, if you’ve never taken a car on a track.

Being someone who always buys the cheapest tires possible as a rule, I’d never fully appreciated the difference between the bargain basement tires and good high performance tires.  Both the BFGoodrich tires and the Cooper Tires performed amazingly well compared to my normal bargain basement types.  What was surprising, to me at least, was how much better the Cooper Tires performed over the BFGoodrich tires.  Going into it, I assumed they’d be pretty similar in performance, both being high end models of tires and name brands.  Granted, I figured the Cooper Tires would outperform the BFGoodrich tires by some noticeable margin, else the Cooper Tire people likely would have picked a different manufacturer’s equivalent utility and price range tire for us to compare theirs too.  But the difference was a lot more than just marginal when driving the tires on both the wet and dry tracks. 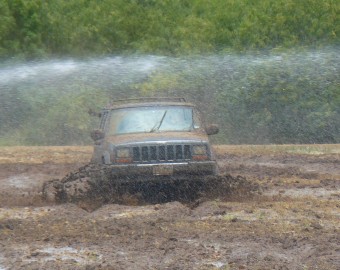 Testing the Discoverer A/T3's in the Mud

Specifically, on the wet tracks with the Mustangs, Corvettes, and Chevy Tahoes, the BFGoodrich tires really struggled to grip around corners at relatively high speeds, particularly in the Chevy Tahoes which almost felt like driving on ice at times, even though it was just wet pavement. This was particularly troublesome when it came to trying to turn and the front wheels choosing instead just to slip out.  Obviously there are ways to compensate for this, besides just going slower, but it’s much better when the car actually turns when you tell it to without resorting to more advanced driving skills. On the track this is important because there are a lot of people watching and you don’t want to get branded with the nickname “Cone Crusher” as one of my compatriots was (Mike Bonfonti, who now will forever be linked to that nickname thanks to the miracle of web search). 🙂  In real life driving situations of course, this can be the difference between you getting in a major accident vs. being able to steer your way clear safely, rather than just acquiring an odious nickname. 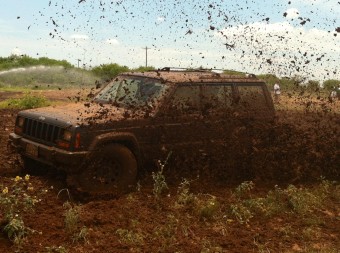 The RS3-A and RS3-S Cooper Tires performed amazingly well in this respect.  I could go significantly faster without the front end slipping out and even when going fast enough to get the back end to slip out, thanks to the fact that the front of the car was still easy to control, compensating for the rear slip was extremely easy.  In the most extreme cases, when I’d go fast enough to have the front slip out even with the Coopers, regaining control was also much quicker with the RS3-A and RS3-S tires.

So in maneuverability at high speeds both on a wet road (I believe they had it set at about .15 inches of water when I was on it) and on a dry track, the Cooper Tires significantly outperformed the BFGoodrich tires, something again, which surprised me in terms of how much of a gap there was between the two in performance. 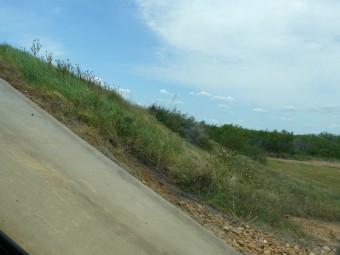 Going up a steep polished concrete covered in water incline... nary a slip, even when stopping and starting

Going beyond maneuverability, with stopping distance, the Coopers performed a little better than the BFGoodrich tires, though the gap between the two was more reasonable here at least.

If you follow my sponsored posts, you probably notice I usually say something good about the product I’m covering.  This isn’t because I’m willing to say whatever positive thing whoever wants me to, but because I don’t take sponsored posts when I know I’m going to give a bad review after looking over what they want me to review.   In this case, though, I was at least willing to cover the product due to the awesome #RideNDrive trip included; so for once I wasn’t actually sure I’d be saying something positive when I covered the tires. Particularly as I’ve always been one who found bargain basement tires generally adequate. 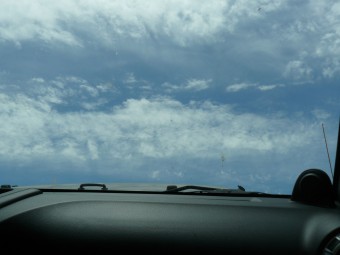 The view from the Jeep while climbing the extremely steep incline

This seemed fine though, as they never asked me to say anything positive at any point. They simply asked that I mention “what tires were tested” and “what conditions [I] tested them in.”  That was pretty much it.  Everything else was open. But, as you can tell from the above review, I was genuinely impressed both with the tires and the many Cooper Tire employees themselves, including some of the designers, I met throughout the three day event (they were there all the time through the whole thing, even late into the evenings, to answer any questions).

If you’re interested, you can feel free to follow Cooper Tire on Twitter here and can view tweets by myself and others at the #RideNDrive event here.