There is an ATM in Antarctica 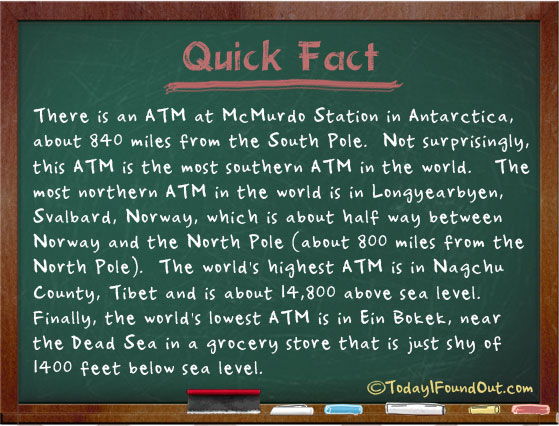 There is an ATM at McMurdo Station in Antarctica, about 840 miles from the South Pole.  Not surprisingly, this ATM is the most southern ATM in the world.   The most northern ATM in the world is in Longyearbyen, Svalbard, Norway, which is about half way between Norway and the North Pole (about 800 miles from the North Pole).  The world’s highest ATM is in Nagchu County, Tibet and is about 14,800 above sea level.  Finally, the world’s lowest ATM is in Ein Bokek, near the Dead Sea in a grocery store that is just shy of 1400 feet below sea level.

Why there is Braille on Drive Up ATMs