All Snakes can Swim 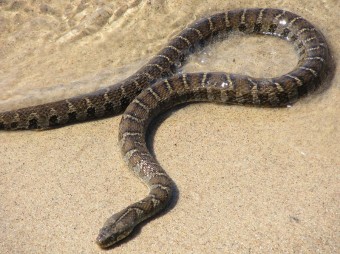 Today I found out all snakes can swim.

If you’re one of those people who are afraid to swim in lakes, rivers, and the like, here’s another reason for you to stay out of the water: all snakes can swim.  Thus, all snakes are technically “water snakes”, even though only some are given that designation, usually due to their propensity to hang out near water.

Snakes swim by moving their body in lateral, wave-like movements, more or less appearing to shape their body in an S pattern.  These undulations start from their head and continuing down their body.  This is the same type of body movement they’ll use when moving on very smooth surfaces.  Using the S-shape movement propagating down their body, the snake can exert a force backwards against the water, which results in them moving forward.  Water snakes also use this method to swim, but these types of snakes often have more flattened sides than other snakes, which allows them to swim more efficiently using this motion over their rounded brethren.

It should be noted though that snakes aren’t nearly as dangerous on the whole as many people give them credit for.  For one thing, even the most aggressive of snakes will typically avoid attacking humans, if they can help it, unless they feel cornered, and even then they’ll usually give warning before striking.  On top of that, around 80% of snakes aren’t significantly harmful to humans, even if they do bite you. Even those that are deadly, most will occasionally not inject venom into you when they strike, simply wanting you to leave.  The exact percentage of “dry bites” varies from venomous snake to venomous snake, but, for instance, around 50% of Coral Snake bites are dry bites, delivering no venom.

In fact, only 9-15 people per year in the U.S. die from snake bites out of about 8000 bites from venomous snakes per year.  This means you are about nine times more likely to die from being struck by lightning than die from being bitten by a snake in the United States.  Even in Australia where seemingly everything in nature seems capable of killing humans and where 7 out of the world’s 10 deadliest snakes live, there is only about 1 death by a snake bite per year.  In both the U.S. and Australia, this is less than are killed annually by bee and wasp stings. 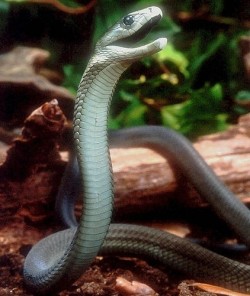 Then again, there are such snakes as the Black Mamba, residing in certain parts of Africa, that you’ll want to run screaming like a little girl from if you ever encounter one. The Black Mamba’s kill rate after a strike is 100% unless large amounts of anti-venom (typically 10-12 vials) are administered very shortly after being bitten.  Given how quickly its venom can kill (as quickly as 10 minutes, though sometimes it takes a few hours, depending on how much is injected; the average time until death after a bite is around 30-60 minutes), around 95% of people still die from Black Mamba bites usually due to being unable to get the anti-venom administered in time.  One single strike from a Black Mamba will deliver around 100-400 mg of venom and only 10-15 mg is needed to kill a human.

They also usually won’t just strike once, but will continually strike whatever is threatening them as much as they safely can before it stops moving.  If it’s a large, dangerous animal they’re striking, they may only strike a few times in quick succession, then may or may not follow the animal until it dies. If they do follow, they usually will continue to strike only when they see safe opportunities, being less fearless than when they’re cornered.  As you might expect from this, Black Mamba’s are at the top of the food chain, outside of humans.

What’s particularly frightening about this snake, apart from being amazingly deadly and 8-14 feet long, is that the Black Mamba can also move as fast as 14 mph, with an average top speed in the range of 10 mph to 12 mph.  In either case, this makes them the fastest snake in the world.  They can also maintain speeds of around 6-7 mph for long periods.

If all this wasn’t bad enough, the Black Mamba is considered to be the most aggressive snake in the world.  However, it should be noted that even having the reputation of being extremely aggressive, it usually only attacks humans when it feels cornered or when a female is protecting her eggs.  When it does feel like fighting, it’s incredibly fearsome.  Because of its size, ground speed, and agility; how quickly it can strike; how fearless it can appear to be; and how deadly its venom is (I for one welcome our new Black Mamba overlords), it generally takes a group of people working together to kill one and even then it’s a dangerous endeavor. So you’ll not want to encounter one of these alone, whether on land or in the water.  In both cases, best to have someone with you that you are faster than!