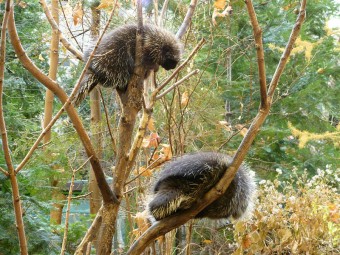 Today I found out how porcupines have sex….very carefully!

Porcupines mate in a very bizarre way. They first begin their ludicrous lovemaking with some nose rubbing. If the female accepts the nose rubbing and, after the initial nose rubbing test, the female is still keen on the male, the male will then stand on its hind legs and the female allows him to urinate all over her body (kinky).  This isn’t done in a normal bladder expelling fashion, though. In this case, the urine is ejaculated at high pressure, rather than relying on internal bladder pressure.

Should this golden shower not be up to the female’s standards (she doesn’t like the pheromones), she will shake off the urine and find herself another mate. Should the rain from the main vein be acceptable, she will expose her non-quilled underbelly and allow the male to copulate for 2-5 minutes. If all is successful, approximately 112-210 days later (depending on the species) a little porcupine baby is born.

This mating ritual is not only strange, but also is infrequent. Female porcupines are receptive to sexual advances for only about 8-12 hours per year, much like my ex-wife.  This mating typically occurs in late summer or early fall.  They do however take full advantage of that time. Females will mate several times with the male of their choice until he becomes sexually exhausted.

Interestingly, unlike many female animals that are frequently raped (such as with ducks where an estimated 1 in 3 mating acts is rape), the female porcupine cannot be raped.  All she has to do to deter a potential rapist is to swipe his mating-ready exposed sensitive region with her tail, problem solved.  So male porcupines are completely at the mercy of the female when it comes to mating.  They also tend to have a tough time of it just to get to mate, generally having to chase off other male porcupines to win the right to mate with the female.  This process often results in them getting stuck with quills during the fighting, even if they win.