December 4th: The Mary Celeste is Found Completely Abandoned Yet Still Containing All Its Cargo, Plenty of Food and Water, and Still Under Sail. The Crew Were Never Seen Again 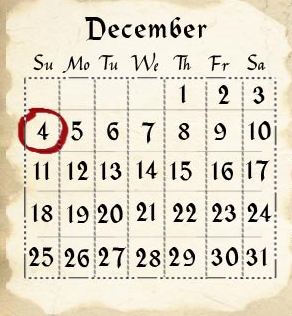 On this day in 1872, the crew of the British craft Dei Gratia spotted the Mary Celeste (originally named The Amazon before being purchased and rechristened) still under sail, but yawing slightly.  Upon closer inspection, they observed that no members of the crew were on deck.  After several hours of watching from a distance, they finally decided to board the vessel.  What they found was a ship devoid of any crew.  Its cargo and food stocks were still there.  The crew’s personally items also seemed to more or less all be aboard the ship.  Only a few items were missing including the life boat, navigational equipment including the ship’s sextant and marine chronometer, two bilge pumps, and the ship’s papers, including maps, but excluding the ship’s log book, which was still aboard.  There was also a frayed rope trailing the ship.  None of the crew were ever seen or heard from again.

This mystery, combined with the ships’ peculiar history (three of its previous captains died aboard the ship, including its first captain, Robert McLellan, on its maiden voyage, along with a series of odd mishaps that surrounded the craft in its lifetime) resulted in the legend of the Mary Celeste growing with all sorts of improbable explanations being put forth about what had happened to the crew, such as: pirates (no cargo nor personal artifacts were taken and there was no sign of violence); the Bermuda Triangle (the ship didn’t sail through the Bermuda Triangle); murdered by the crew of the Dei Gratia (the captains of the two ships were known to have been close friends for many years); drunken crew (the denatured alcohol cargo would have killed the crew had they tried to drink it); that the captain had killed the crew and rendezvoused with the Dei Gratia, then split the profits (the captain was actually a part owner of the Mary Celeste and his stock in the ship itself, let alone the payoff from delivering the cargo as planned, was worth more than would have been his cut in such a scheme); aliens (there was a lifeboat and navigational equipment missing, it’s unlikely the aliens would have needed these) ;-); etc.

The truth is that there exists a very simple and very plausible explanation that fits the actual facts, rather than much of all the false stories that grew up around what was found when the ship was discovered.  The simple explanation is this.  The ship was hauling 1701 barrels of denatured alcohol.  The captain of the Mary Celeste, Benjamin Briggs, had previously commented on how he was nervous about hauling such an explosive cargo on such a long journey.  Nine barrels of the alcohol were found empty aboard the ship when it was discovered.  Further, the ship had taken on a decent amount of water, though nothing for any captain to be too concerned about.

The empty barrels in question were made of red oak, which is quite porous and likely to let alcohol vapor escape.  All the other barrels were made of white oak, which wouldn’t have suffered from this problem.  Whether this was how they became empty or not, the captain, already having been nervous about such an occurrence where fumes accumulate in the hold, likely ordered the ship temporarily abandoned when the fumes were detected in case of an explosion.  An explosion wasn’t completely unlikely as the metal bands from the barrels rubbed together in the hold and could create sparks. It’s also possible there was an actual explosion.  An experiment done by historian Eigel Wiese demonstrated that an explosion could have taken place without leaving burn marks, even on paper.  Either case would have caused the captain to temporarily abandon ship and there is evidence that the crew abandoned the ship very rapidly (such as leaving the sails up and leaving their personal effects behind), but not so rapidly that they didn’t take needed items to continue on aboard the life boat, such as the navigational equipment.

At this point, they would have tied themselves off to the ship and floated behind it at a safe distance in case of explosion.  From here, they could simply wait and watch and let the Mary Celeste air out.  As stated previously, a frayed rope was found trailing the ship, which would seem to indicate this is what took place. From here, somehow, the crew aboard the life-boat, whether intentionally or by accident with the rope breaking, became separated from the ship.

There were reports of sporadic storms, including one reported in the area around the same day the crew appear to have abandoned the ship.  So if a storm came up, or whatever event which caused the ship to take on water while they were being towed behind the ship, the crew may have found it necessary to cut the rope themselves to free their own craft to properly maneuver through the waves.  Or, perhaps the rope was simply already frayed and the line snapped when the wind from the storm suddenly came up, resulting in the crew aboard the life boat being unable to catch it, with it still being under sail.

In any case, when the crew abandoned their ship, the Mary Celeste is estimated to have been fairly close to St. Mary’s Island (within 700 miles). The sighting of that island was the last entry in the Mary Celeste’s log book on November 25.  So, given Benajmin Briggs was an exceptionally experienced captain, having been a sailor most of his life and previously captaining five other ships, it would seem probable, especially with the navigational equipment they brought with them, that they would have been able to make it to the island, had not something like a storm caused the life-boat to sink first.

Whatever the case, all ten members of the crew, including the captain’s wife and two year old daughter, were never heard from again.  The cargo was eventually sold and the ship itself was bought and sold numerous times before finally being intentionally sunk by its final owner, G.C. Parker, in an insurance fraud scheme.  Upon investigation of this final voyage, the insurance company discovered that the ship had not contained any cargo, as the captain said, and that he had intentionally run the ship aground on a reef and then tried to burn it when it hadn’t fully sunk.  The captain was subsequently arrested and died in prison shortly thereafter.