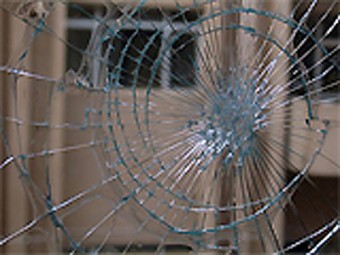 Today I found out laminated glass, also known as “Safety Glass”, was invented by accident.

Laminated glass can be found in car windshields, bank teller protective barriers, and a variety of other places where shatterproof glass is a necessity. This type of safety glass was invented by Frenchman Édouard Bénédictus.  Bénédictus is probably more popularly remembered for his art, but he also was a bookbinder, writer, composer, and, more to do with this article, a chemist.

One fateful day in 1903, when working in his lab, Bénédictus accidentally knocked a glass flask off of his desk.  Rather than the glass shattering, spreading tiny pieces of glass all over the floor, instead, it simply broke while more or less keeping its form.  Upon further investigation, Bénédictus found that the glass had at one time contained plastic cellulose nitrate, which had dried on the flask and created a type of adhesive film coating the inside, which kept the glass from shattering in the normal fashion.

There are conflicting reports on whether Bénédictus immediately realized the potential of his discovery or whether it took him reading about several automobile accidents where people were seriously injured due to their windshields shattering, sending shards of glass flying everywhere.  Whatever the case may be, eventually, Bénédictus was inspired by this experience with his flask to create a type of shatter proof glass.

The resulting safety glass was made shatter proof using much the same method as how his flask had accidentally become shatter-proof.  Specifically, he made his safety glass by bonding a layer of celluloid between two layers of glass. Once the process was perfected, he filed for and received a patent for his laminated glass in 1909.  While his safety glass wasn’t immediately adopted by automobile manufacturers, it did become very popular during WWI, being used in eye pieces of gas masks.