How To Read An EKG (electrocardiograph) 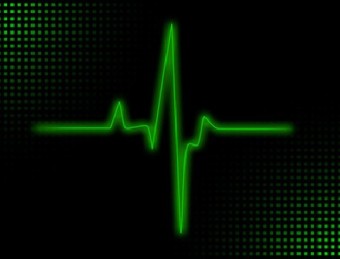 Today I found out how to read an EKG.

While some people might say that kind of skill should require 13 years of preparatory school, four years of college, four years of medical school and a specialty in cardiac electrophysiology, I say…Pshaw!  It’s  not rocket science! If it were, there would be more combustion and potential for speedy projectiles gone awry (You know, I bet rocket scientist Christmas parties are really fun…and imagine the Fourth of July company picnics!)

This is just cardiology, simple biological pipes and wires. EKGs are simpler still, being a moving real time map of the “wires” part and how they conduct electricity.  Reading EKGs only seems hard because most cardiologists use long (expensive) words.

As a warm up for the rest of this article, you might want to take a gander at Today I Found Out‘s article: “How The Heart Works”. Or, to make a long story short, most healthy hearts pump blood through the body when stimulated by an electrical signal that travels along predetermined pathways.  This causes the cardiac cells to contract in just the right order, resulting in a magical four chambered pumping action.

An EKG is a graph (thusly named an electrocardiograph) tracing the strength and direction of this electrical signal. Leads equipped with conductive goo are placed on different parts of the body allowing a view of the heart from different angles.   If the electrical activity of the heart at any given moment is traveling toward the lead being viewed, the line on the graph goes up (positive deflection).  If the electrical activity is traveling away from the lead, the line goes down (negative deflection). This graph is being traced by a stylus on a moving piece of graph paper.  In a normal healthy heart, an EKG representing one complete heartbeat looks about like this : 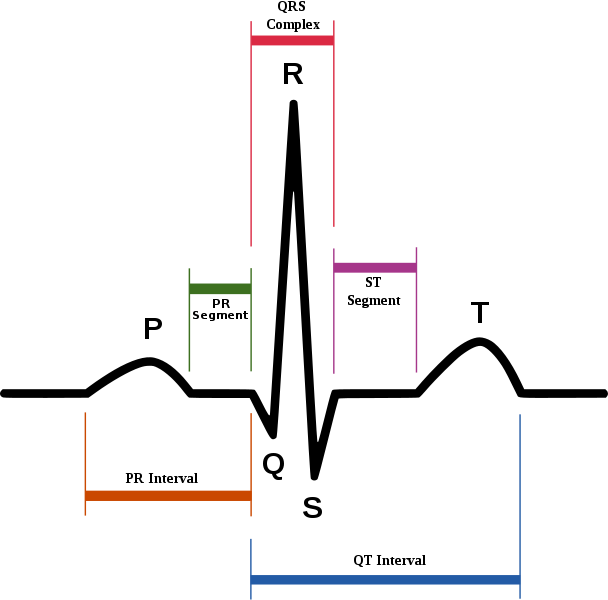 That first petite little hump, affectionately called the P wave, represents the electrical signal that starts in a group of cells called the Sinoatrial Node. This signal then travels through the atria (the smaller and upper two chambers of the heart) causing them to contract and push blood in to the larger and more powerful ventricles below.

The “PR Interval” segment represents a delay in the signal at another grouping of cells called the AtrioVentricular Node.  This delay allows time for the atria to completely deliver their bounty into the Ventricles. With perfect timing this signal continues through the Bundle of His.  The signal splits and speeds along down the left and right bundle branches, making its way to the Purkinje fibers and turning north again. This stimulates those Ventricular beefcakes to contract and deliver their payload to the lungs and body (if hearts had biceps, the left ventricle would be the proverbial “gun show”….it’s such a glory hog!).

This pattern is called normal sinus rhythm.  It is the basic EKG of any normal healthy heart.  Naturally, there are variations of normal within the healthy population. For example, my boyfriend is very fit and has a *huge* R wave (hands off his big left ventricle ladies, it’s all mine!  And don’t get me started on his early repolarization…and no…being early in this case is definitely not a bad thing).

However, anything outside of the normal range is analyzed along with the patient’s symptoms to create a working diagnosis. There are several types of common abnormalities.  A PR interval that is too long is called a first degree block.  A QRS that takes longer than .12 seconds is likely to be caused by a delay in one or both bundle branches, called a bundle branch block.  A complete lack of P waves, and in their place a squiggly line, combined with an irregular heartbeat is likely to be atrial fibrillation. What really gets a Paramedic or ER doctor excited is when they see an elevation of the ST segment in a few consecutive leads.  This is referred to as an ST elevation myocardial infarction (heart attack) and generally results in a speedy trip to the catheterization lab  (if you’re interested in more of what is going on during a heart attack, see: How a Heart Attack Works). Truly, the list of irregular EKGs is endless.

To bastardize the words of Leo Tolstoy, who seemed to know a thing or two about the heart, “Happy [hearts] are all alike; every unhappy [heart] is unhappy in its own way”. If only Anna Karenina’s troubles could have been solved by a trip to the cardiologist!