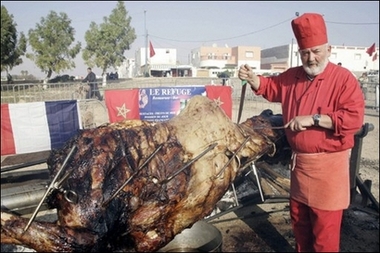 As you might expect, cooking this particular menu item is no easy culinary act.  So, given that it’s hard to get an invitation to such events as dinner parties with a Sheik, where it is occasionally served, and the relative difficulty and expense of preparing the thing, it’s not surprising that, for a long time, whether such a menu item was actually ever prepared was a controversial topic of discussion among foodies of the world, despite it being in the Guinness Book of World Records.   However, documented cases of it being prepared can be found, such as in The Fearless Diner by Richard Sterling where he both partook in such a dish and met someone who’d actually been asked to make it for a wedding for a Sheik, which he subsequently did.

One of the most popular variations of this dish is in the cookbook  ‘International Cuisine’, 1983. This particular version of the recipe says you first skin, trim and clean a medium-sized camel, lamb, and chickens and boil them until tender (one wonders where you get a pot big enough to boil a whole camel). Precook the stuffing: peel hard boiled eggs, cook fluffy rice and mix it with fried nuts. This stuffing goes into chickens which together with more rice go into a lamb. Finally, the whole camel should be stuffed with the stuffed lamb and even more rice, wrapped in palm leaves and broiled until brown over large charcoal pit 3 feet in depth and served with rice. It takes about 20 to 24 hours to cook the stuffed camel and it can feed as many as 80 people.