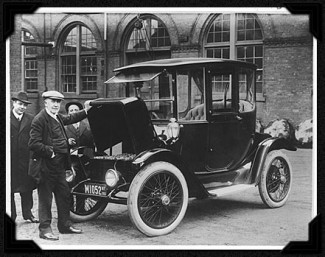 Today I found out in 1899 ninety percent of New York City’s taxi cabs were electric vehicles.  This fleet of electric cars was built by the Electric Carriage and Wagon Company of Philadelphia.  Not only that, but in 1899 and 1900, electric cars outsold all other types of cars, such as gas and steam powered vehicles.  In 1902 an electric car, the Baker Torpedo, became the first car to have an aerodynamic body that enclosed both the driver and the platform.  This car at one point reached 80 mph in a speed test before crashing and killing two spectators.  It was later clocked as high as 120 mph, but with spectators not invited this time. 😉

Electric cars got their start in the early 1800s.  Early efforts were more or less “proof of concept” inventions with limited speed and range as well as using non-rechargeable batteries.   However, in 1842, two inventors separately created the first practical electric cars with rechargeable batteries.  The inventors were American, Thomas Davenport, and a Scotsman, Robert Davidson.  Over time, improvements were made by various inventors, improving charge capacity of the cars, making better electric motors, and things of this nature.

What really eventually  jump started the popularity of electric cars was in 1880 when Thomas Edison was awarded the patent for the carbon filament vacuum tube (a practical light bulb).  As these light bulbs became increasingly popular over the next couple decades, so did the widespread distribution of electricity, providing the infrastructure needed for the electric car to be viable for the general public.

At the time, the advantages of the electric car over the other popular types (gas and steam) were significant.  The electric cars had no vibrations from the engine and were extremely quiet compared to its competitors.  They also didn’t emit smoke or backfire frequently as did gas powered cars.  They were also ready to go right when you sat in the car, unlike gas powered cars that needed to be cranked by hand to start; this was not only difficult, but also could be dangerous.

Steam powered cars, on the other hand, at the time took up to 45 minutes to get going on cold days.  The other large advantage with electric cars was not having to change gears, which was a hard thing to do in early cars, but something that wasn’t necessary in electric cars.    The only real advantage that gas powered cars had at this time were the long ranges they were capable of with larger tanks and the ability to fill up quickly when the tank was empty.  However, because at the time there weren’t a lot of well developed roads for cars to drive on safely, most people only drove cars in cities anyways, rarely traveling long distances for normal usage of cars.

Notable popular electric cars of the early 1900s were the:

Cost for a basic model electric car in the early 1900’s was about $1000, with more lavishly decked out models costing closer to $3000 a piece.   Enter Henry Ford and a few other factors and we see the downfall of the electric car.

By 1915 Henry Ford, due in part to his innovative assembly line construction, was able to offer his cars at a base price of around $500 a piece (equivalent to about $10,000 today), which made it affordable for even average people, something that had never been the case before.    In contrast, at that time the average price of an electric car had steadily risen to about $1700.  This was also around the same time crude oil was discovered in Texas and Oklahoma, which drastically reduced the cost of gasoline so that it was now affordable to average consumers.  In addition to these factors, Charles Kettering invented the electric starter, which eliminated the need to hand crank gas powered engines.  Roads began expanding, spurring the need for greater range that only gas engines could provide at the time; this was not only because of the range factor, but also because gasoline cars were now becoming significantly faster than electric cars.

By 1935 the electric car was officially dead and wasn’t revisited until around the 1960s and then still unsuccessfully.  To date, all attempts to create a commercially successful fully electric car have failed.  Though, that appears to be about at an end with cars like the Tesla Model S, which has a range of about 250-300 miles; can seat 7; can be charged from empty to full in under 45 minutes; can go from 0-60 in 5.6 seconds; and looks pretty dang snazzy to boot; along with it costing under $50,000 and by 2014 is expected to cost under $35,000, which starts to put it in the category of “affordable” for middle class groups when you consider its cost efficiency per mile will save you something like $10,000-$15,000 over the life of the car over a typical fuel efficient gasoline vehicle. Not only that, but there are significantly less maintenance costs over the lifetime of an electric vehicle to further trim down the overall cost of the car (Wow that just sounded like an advertisement.  I apologize.  I am in no way affiliated with Tesla;  it’s just an amazing car that is light years ahead of anybody else right now and is particularly notable because it is the first truly viable for “normal” people electric car to hit the market in the last 100 years, really check it out).

Some other promising electric cars coming out soon are the Nissan Leaf, which looks a lot like the Prius and has a 100 mile range.  One big plus is that it only takes 30 minutes to charge up to 80%, which is decent enough.  Good start, but not good enough over all if they expect it to do well with “typical car use” consumers.  However, one huge plus is that it will only cost around $30,000, which is a fair amount cheaper than the Tesla Model S and will help it sell to people looking for a short range, economical, and environmentally friendly work commuter car.

Another promising up and comer is the Mini-E that has about 120 mile range but no set price yet on how much it will cost.  This one also has the additional downside of taking 3 hours to charge with their quick charge and 20 hours plugged into a normal power outlet.  Both of these have a ways to go to catch up to Tesla, but it’s all a very good start to revitalizing an industry that has been essentially dead for 100 years.

The electric car was well ahead of its time in the 1800s and while we haven’t made that big of improvements in the electric motor since its inception, as far as basically how it works, we have made HUGE strides recently in battery technology with bigger strides on the horizon, finally making the electric car a viable option to consumers very soon.

One notable electric car manufacturer who previously was known for the “Wood’s Phaeton”, which had a range of 18 miles at 14 mph, in 1916 invented a hybrid car that had both an internal combustion engine and an electric motor.  Take THAT Prius! 🙂