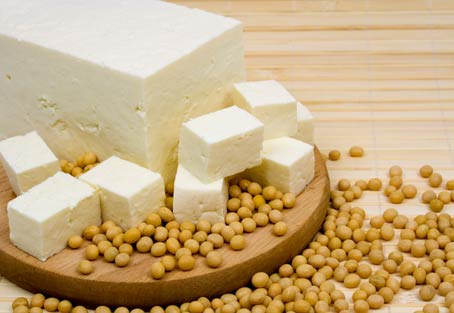 Today I found tofu was popularly eaten as far back as the 2nd century BC in China.

Tofu’s flavor is not the same as cheese but it is processed in a similar way by coagulating soy milk and then pressing the resulting curds into soft blocks. Often called ‘bean curd’, ‘bean cheese’, or ‘soy bean cheese’, tofu contains a low amount of calories, relatively large amount of iron, and very little fat. There are two main categories of tofu: fresh (may be soft, firm, or dried) and processed, which was likely created to increase the product’s shelf life; this variety of tofu may be fermented and pickled.

The origin of such basic foods such as cheese, butter, or tofu is always a subject of significant controversy. It is believed though that tofu definitely originated in China. Although ancient varieties of tofu were slightly different from modern forms, tofu has been commonly produced and consumed in China since the 2nd century BC and the original name of “bean curd” – Chinese ‘dou fu’ pronounced as ‘tou fu’- was mentioned in a document by T’ao Ku in about 950 AD. ‘Tofu’ is a Japanese adaptation of the Chinese name by which this food item became popular worldwide.

So what about the invention of tofu’s production method? Probably the most plausible and popular legend is that, during the Han dynasty, tofu was discovered accidentally by a northern Chinese cook who was experimenting with flavoring soybean soup (soybean soup being very popular in China around this time). He seasoned a pureed simmering soybean soup with unrefined sea salt containing natural nigari (the dried substance remaining after salt is removed from sea water; it is a refined coagulator containing magnesium chloride with some magnesium sulfate). He then noticed that curds formed from his experimentation. What’s happening here is Sea salt, which contains calcium and magnesium salts, cause the soy mixture to curdle into a tofu-like gel. Nigari is still frequently used in the production of tofu, as it makes the final product softer than many modern techniques.

Although in the West tofu became very popular only around mid of 20th century, it is a substantial part of East Asian and Southeast Asian cuisine, popularly spread with Buddhism as soy is an important source of protein in a vegetarian diet.