What the Eight Juices are in V8 Vegetable Juice

December 16, 2010 Daven Hiskey
Note: This is a guest article contributed by frequent TIFO visitor and owner of StevenHumour.com, Steven. 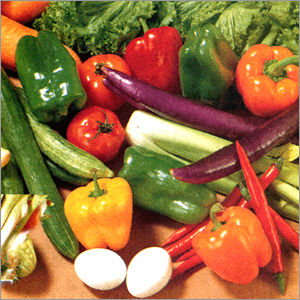 Today I found out what the eight juices are in V8 vegetable juice.

The included juices in the original V8 100% vegetable juice come from tomatoes, carrots, celery, beets, parsley, lettuce, watercress, and spinach.  The dominate juice in this mixture is tomato juice comprising nearly 87% of the total juice.

The V8 vegetable juice blend was created by W.G. Peacock in 1933 in Evanston, IL.  Peacock was the founder of the New England Products Company, which made a variety of vegetable juices and marketed them under the brand name “Vegemin”.  Not surprisingly, vegetable juice wasn’t a big seller at first given that the original juices were sold as pure juice from specific vegetables.

In order to try to boost sales, Peacock began experimenting with mixing the juices from different vegetables to improve on the overall flavor.  Eventually, he came up with the recipe for “Vege-min 8”, which was later shortened to “V8” at the suggestion of a local grocery store in Evanston, Illinois that was carrying the product.

Expand for References:
Disclaimer: Guest Articles are written by various people and while I do my best to make sure they are factual by checking their sources and the like before allowing them to be posted, I do not guarantee that everything in them is going to be 100% accurate as I myself didn’t do the research for these articles and it’s possible their sources, even if they are reputable, are themselves inaccurate.