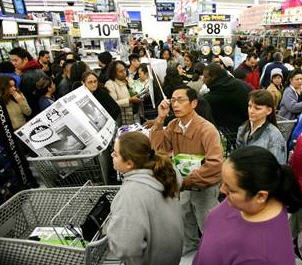 Myth: Black Friday is the biggest shopping day of the year.

Black Friday is not the biggest shopping day of the year. In fact, it’s typically not even in the top five, though has cracked the ranks a few times in recent years.

The real biggest shopping day of the year is nearly always the Saturday before Christmas, excepting a few occasions where it typically then ends up being the Thursday or Friday before Christmas, when Christmas falls on a weekend day. Thus, the procrastinators seem to outnumber the early birds in this respect.

Besides people’s naturally tendency to procrastinate, this should not be a surprise as most people are simply trying to get specific great deals on Black Friday and aren’t tending to look to get all their Christmas shopping done in one day. So while there might be a lot of people in the stores, most of them aren’t coming home with a lot of items, according to consumer reports. On the other hand, the last Saturday before Christmas is the last convenient time for many shoppers to get their shopping done and, for many, they put off shopping for a lot of the people they have to shop for until the last minute for various reasons. So shoppers on this day tend to buy significantly more items per person than shoppers on Black Friday, making it a much more profitable day for retailers.