Commercial Banana Plants are Perfect Clones of One Another 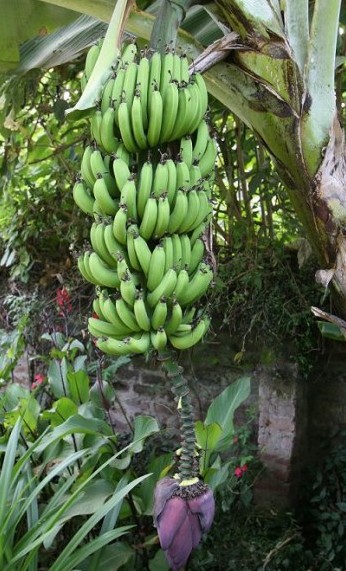 Today I found out nearly all commercial banana plants are perfect clones of one another and most originate from one single plant from Southeast Asia.   Now to be clear, there are approximately 1000 different types of banana plants in the world today and within each variety most are generally clones of one another, although some do have a bit of genetic diversification.  But “the” banana, since the 1960s, the one sold commercially in supermarkets the world over, is the Cavendish banana.

Most types of bananas originate from hybrids of the Musa acuminata and Musa balbisiana.  When these two cross breed, the result is a half breed banana plant that is almost completely sterile.   The first records of these half breed banana plants being cultivated dates back around 10,000-15,000 years ago, making it one of the oldest known cultivated plants.  Because this mutant plant was unable to breed on its own, agriculturists had to find another way to propagate the plants.  There are a few different ways to do so, but the most popular is to simply take a shoot, called a “sucker”, off an existing plant and plant it elsewhere.  Even if the sucker has no roots, if placed in the correct type of soil (wet sandy soil), it will develop them in time.  The banana plant was gradually developed into varieties we see today and propagated throughout the world initially by Arab traders and later Spanish conquistadors.

So a hybrid plant that normally would have died off quite quickly has been spared by human intervention, with humans’ simply taking shoots from desirable existing plants and spreading them throughout the world.  The advantages to this is that among each variety, they are nearly all perfect clones of one another, which means as a commercial product, a Cavendish banana from some Cavendish banana plant in Africa will taste and look the same as one from South America.  There is one huge drawback however.  Because they are clones, what will kill one, will kill them all. 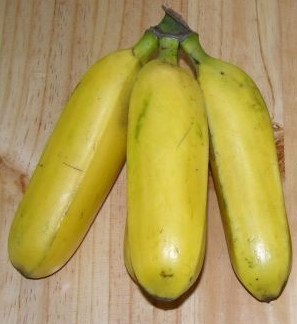 Interestingly, the Cavendish banana was not the world’s most popular banana until the 1960s.  In fact, it was relatively unknown among the masses and even after the 1960s the former world’s most popular banana, the Gros Michel or “Big Mike”, was generally preferred by businesses and consumers alike.  The Gros Michel was preferred by businesses due to being easier to ship and they stored longer before spoiling than the Cavendish.  Consumers also liked them better for the increase in storage time as well as the fact that they are larger and sweeter and generally considered to taste better. The latter being one of the reasons it was the world’s most popular banana in the first place.  Unfortunately, the world was forced to switch bananas in the middle of the 20th century.

So what happened to force this switch?  What happened was a banana apocalypse on a global scale.  You see, the drawback of the fact that within each variety of banana nearly all the bananas are clones of one another is what will kill or harm one banana plant will do the same to all other banana plants of the same variety.  Enter the Panama disease which caused the near extinction of the Gros Michel Banana.   Panama disease is a type of fungus that lives in the soil and to which fungicides do not work against, which is why it is such a threat.  There are a variety of strains of this fungus out there, one of which wiped out the Gros Michel Banana as a commercial product.

It was around the 1920s when this particular strain of the Panama disease first showed up in Sirname.  From there, it spread quickly through the Caribbean and eventually throughout the banana growing world.  By the 1960s, due to the mass wipe-out of the Gros Michel, banana growers were pretty much all nearly bankrupt and were desperately trying to find a way to stay afloat.  Enter the Cavendish banana, which is smaller, but somewhat similar tasting to the Gros Michel, only less sweet and more care needed in its shipping and storage.  But just as important as the similar taste was that it was resistant to the particular strain of the Panama disease that wiped out the Gros Michel.  A few billion dollars in infrastructure change later and growers successfully made the switch, with the mass public accepting the new banana in place of the Gros Michel.

Unfortunately, a new strain of the Panama disease, that the Cavendish banana is not resistant to, sprung up in 1992 and threatens the world’s most popular banana once again.  This time however, there has not yet been found a similar substitute banana among the other 1000 or so varieties out there.  Most varieties of banana contain giant hard seeds throughout the soft fleshy inside and generally taste nothing like the bananas we are used to eating.  A second banana apocalypse, if it happens soon before a new variety can either be genetically engineered or carefully bred, will likely see the end of the fruit as a popular commercial product.

Since this new strain of Panama disease has showed up, it has already wiped out plantations in Indonesia, Malaysia, Australia, and Taiwan and is currently spreading through Southeast Asia.  It is also thought that it is only a matter of time before it spreads through Africa and Latin America, which would be the death knell for the Cavendish as a commercial product.

Because of this, extremely strict cultivation rules and regulations are in place to try and protect the commercial plantations from becoming infected.  Some experts even say this should be sufficient to stop the commercial extinction of the Cavendish banana from ever happening.  But many experts feel this is naive as similar efforts were put forth to try and protect the Gros Michel before its eventual commercial extinction.  Although, we do have the benefit of better technology today to aid in protecting the plantations.  However, even with this, most experts feel it is only a matter of time before Cavendish bananas will no longer be available in stores.