Today I found out Keanu Reeves’ first name is pronounced “Kay-ah-noo”, not “Key-ah-Noo”. That isn’t the only misconception surrounding his name. The name itself means “the coolness”, but is often incorrectly said to mean “cool breeze over the mountains”. Reeves’ was named after his uncle Henry Keanu Reeves. In Keanu Reeves’ early days in Hollywood, his agent thought his name […]

END_OF_DOCUMENT_TOKEN_TO_BE_REPLACED

Keanu Reeves’ Donated Most of His Matrix Earnings 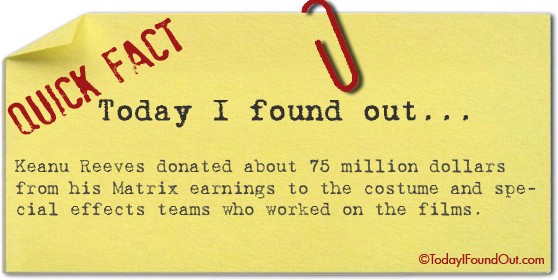 ##EMBED## Keanu Reeves donated about 75 million dollars from his Matrix earnings to the costume and special effects teams who worked on the films. Sources and More Interesting Keanu Reeves Facts