Harry Houdini Was Once a Wild Man in the Circus 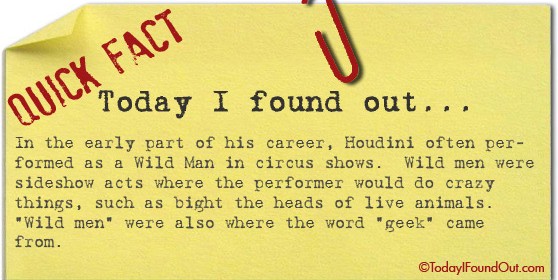 ##EMBED## Click Here for Sources and to Learn More Interesting Houdini Facts In the early part of his career, Houdini often performed as a Wild Man in circus shows.  Wild men were sideshow acts where the performer would do crazy things, such as bight the heads of live animals.  “Wild men” were also where the word “geek” came from.

END_OF_DOCUMENT_TOKEN_TO_BE_REPLACED 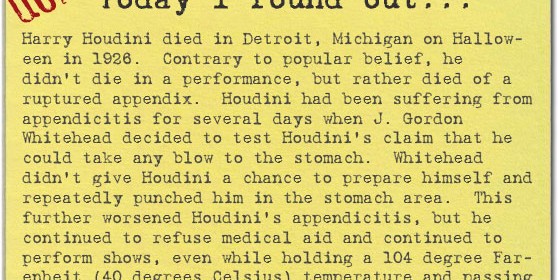 ##EMBED## Click Here for Sources and to Learn More Interesting Houdini Facts Text Version Harry Houdini died in Detroit, Michigan on Halloween in 1926.  Contrary to popular belief, he didn’t die in a performance, but rather died of a ruptured appendix.  Houdini had been suffering from appendicitis for several days when J. Gordon Whitehead decided to test Houdini’s claim that […]