The Story of Jan van Speijk, the Explosive Dutch Hero 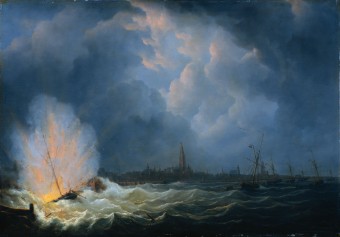 History is littered with individuals who made the ultimate sacrifice for their country, but it could be argued that few have made a last stand as explosive and witty as the Dutch Naval hero, Jan van Speijk.

Born in 1802 on January 31st in the city of Amsterdam, Jan van Speijk (or Speyk, if you prefer), was orphaned just weeks after being born. As a result, Van Speijk spent the entirety of his childhood being raised in the city’s orphanage, or the Burgerweeshuis as it was known to speakers of his native tongue.

Initially the young Dutchman was trained in the art of tailoring, but spent his nights educating himself on how to be a sailor. In 1820, shortly after his 18th birthday, the fresh-faced teen managed to realise his long-held childhood dream and was accepted to serve aboard a Dutch naval ship.

Between 1823 and 1825, Van Speijk earned the respect of his peers by proving himself to be a ferocious, almost fearless warrior, cutting his teeth slaughtering pirates along the Bangka strait in the Dutch East Indies. Van Speijk’s almost single-minded obsession with killing and arresting every potential threat to his homeland during these years eventually earned him the not unimpressive nickname of Schrik der Roovers (Terror of the Bandits) amongst his fellow sailors. During this time, Van Spiejk also led a fleet that bombed Antwerp harbour during a Belgian uprising.

When the Belgian War of Independence broke out in 1830, due to his almost flawless record of pirate murder and noted hatred of the Belgians, Van Speijk was given command of his very own gunship, the Zr. Ms. Kanonneerboot No.2.

Before we get to Van Speijk’s most famous and explosive feat, we should probably explain why the Belgians were fighting for independence in the first place. In a nutshell, after the defeat of Napoleon in 1815 at the hands of the Iron Duke in Waterloo, Willem I jumped on the opportunity Napoleon’s downfall presented and declared himself king of the “Kingdom of the United Netherlands” which comprised of the Netherlands, Belgium, Luxembourg and the short-lived country of Limburg.

Under the rule of King Willem I, Belgians, despite representing the majority of the populace, were generally marginalised in terms of having a say in how the country was run. Tensions were heightened even more when the King, in an attempt to further unify his kingdom’s people, demanded that everyone speak Dutch (at the time many, particularly in the south, spoke French).

A bigger issue was that the King was a supporter of the Protestant Dutch Reform Church, though officially religious freedom was the rule of the land at the time in the United Netherlands. The Belgians in the South were predominately Catholic and had concerns that along with snuffing out French, the King might at some point set his sights on getting rid of Catholicism too.  This and other such factors eventually resulted in the Belgian populace collectively deciding that they’d had enough, revolting in 1830.

For the first few months of the revolt, Van Speijk’s duties were mainly limited to inspecting ships entering and leaving the port of Antwerp, a reasonably cushy gig that wasn’t particularly dangerous. However, this all changed on February 5, 1831 when a freak gale blew Van Speijk’s ship towards the Belgian coast.

As soon as Van Speijk’s ship was in rowing distance of the shore, Belgian dissenters forced their way aboard and at gun point, demanded that Van Speijk lower the Dutch flag aboard his vessel. Exactly what happened next is the subject of some debate. In one version of events, Van Speijk calmly responded to the threat by drawing his own gun and shooting a nearby barrel of gunpowder, detonating it and killing almost everyone aboard (28 of his own 31 crew members perished in the blast; it is unknown how many Belgians died in the explosion). In another, Van Speijk ran below deck and exploded the gunpowder with a lit cigar he just so happened to be smoking.

Whichever version is accurate, Van Speijk intentionally set off gunpowder stores aboard his ship resulting in a spectacular explosion. Legend has it that Van Speijk’s last words in response to the Belgian’s demands were “Dan liever de lucht in” which roughly translates to “I’d rather blow up!”

Van Speijk’s decision to detonate his own ship to stop it falling into enemy hands didn’t really come as that much of a shock to the Dutch government and his peers. You see, he had sworn on his honor that he’d die rather than let his ship be captured. In fact, in a letter Van Speijk sent two months before his fiery death, he’d compared himself to a Dutch hero from the 17th century, Reinier Claeszen, who’d done just that, perhaps inspiring Van Speijk to perform his final act.

The Dutch government quickly jumped on Van Speijk’s act of defiance and used it to galvanise the Dutch populace against the Belgians. Eight days after he ascended to the heavens aboard a flaming boat bristling with guns, the Dutch Government declared a state-wide period of mourning. On top of this, Van Speijk’s remains were buried with full honors in a cemetery in his hometown alongside the remains of other naval heroes. The mast from his ship was also recovered and was put on display in the Royal Netherlands Naval College, where it continues to be displayed to this day. 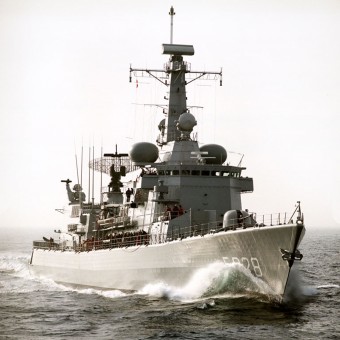 To cement his status as a Dutch folk hero, in 1833 King Willem I declared that as long as the Dutch Navy existed, it would have at least one ship named Van Speijk so that his memory and sacrifice would never be forgotten by anyone serving in it. That tradition has kept up to the present day, with the current ship bearing his name being the HNLMS Van Speijik (F828) which was launched in 1994 and is still in service today. (Picture right)