How Capone Got His Scars, the Joint Chiefs’ Treasonous Plan Rejected by Kennedy, and More, in Yet Another 10 Fascinating Quick Facts 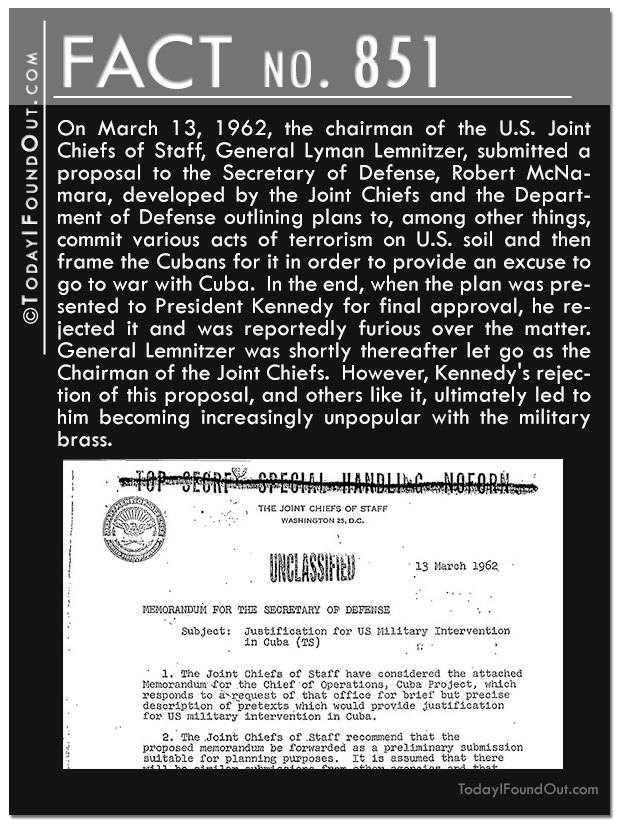 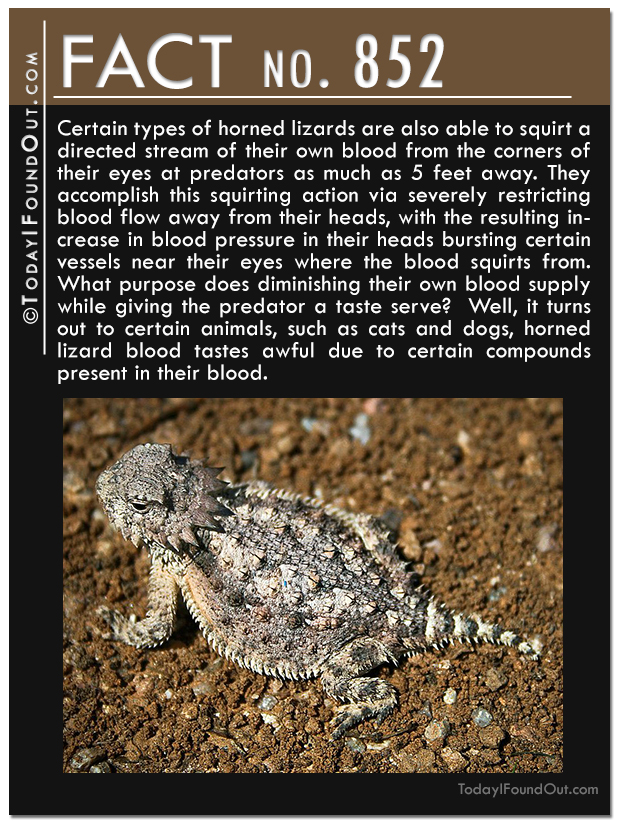 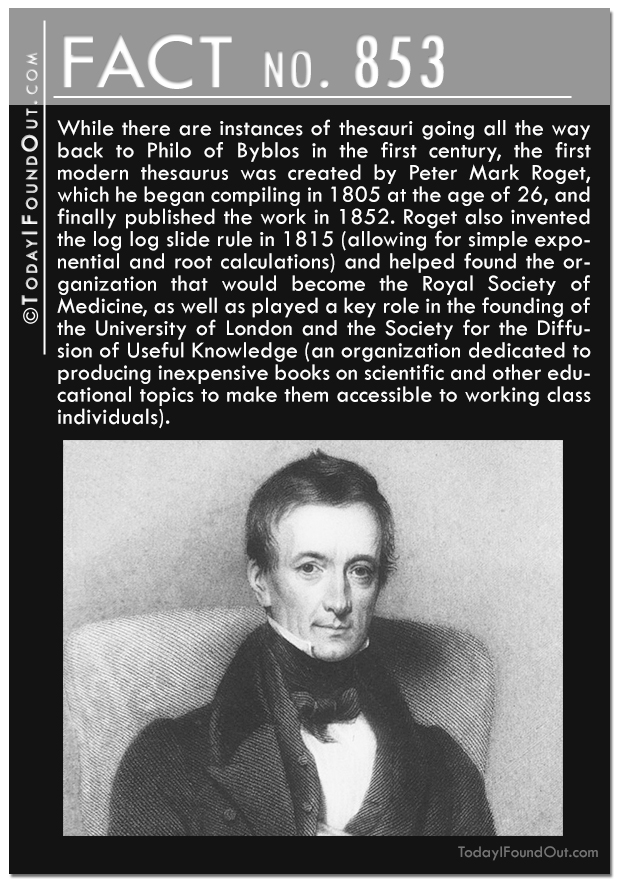 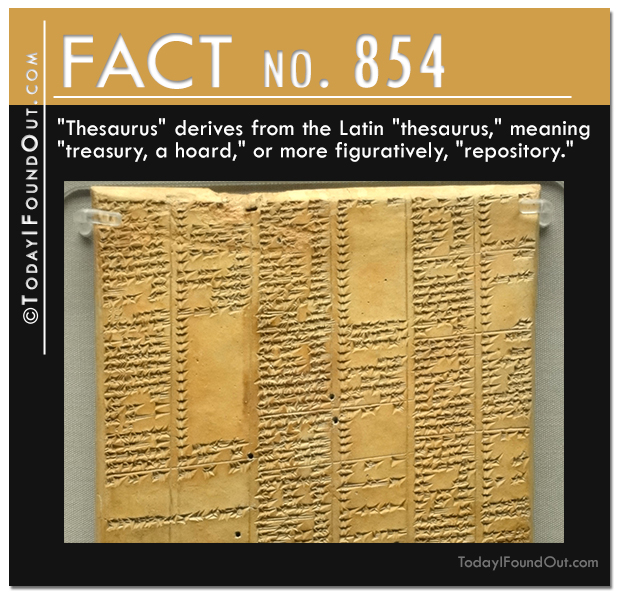 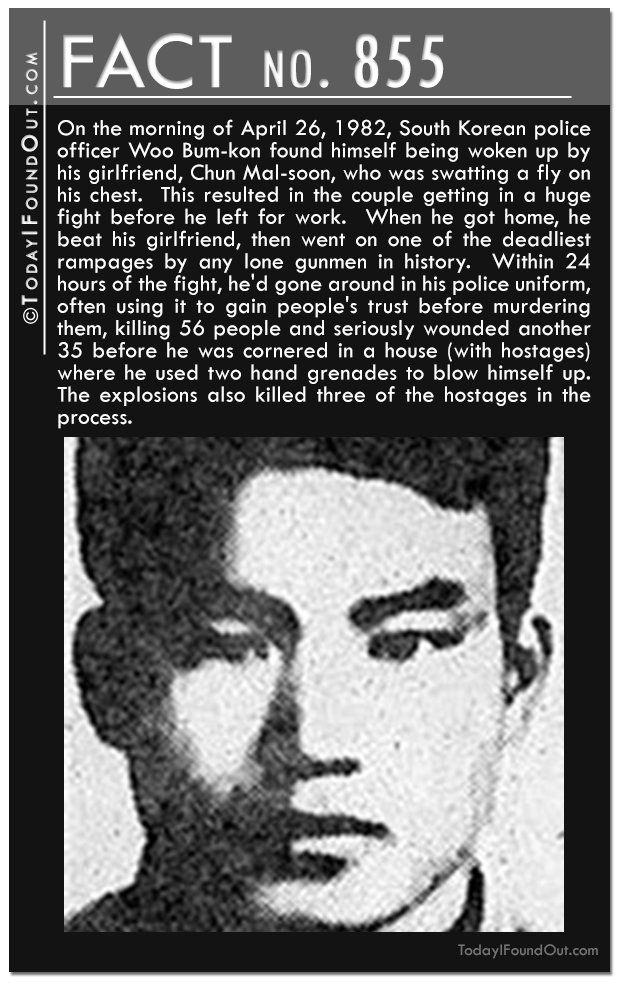 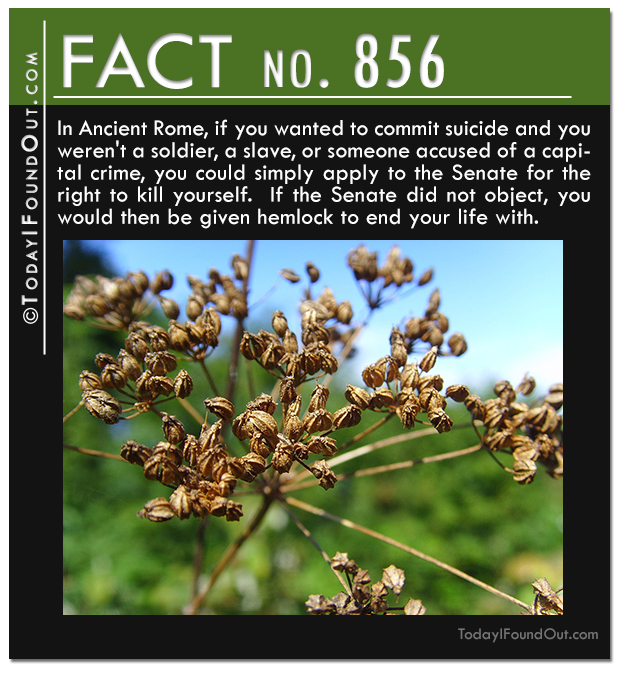 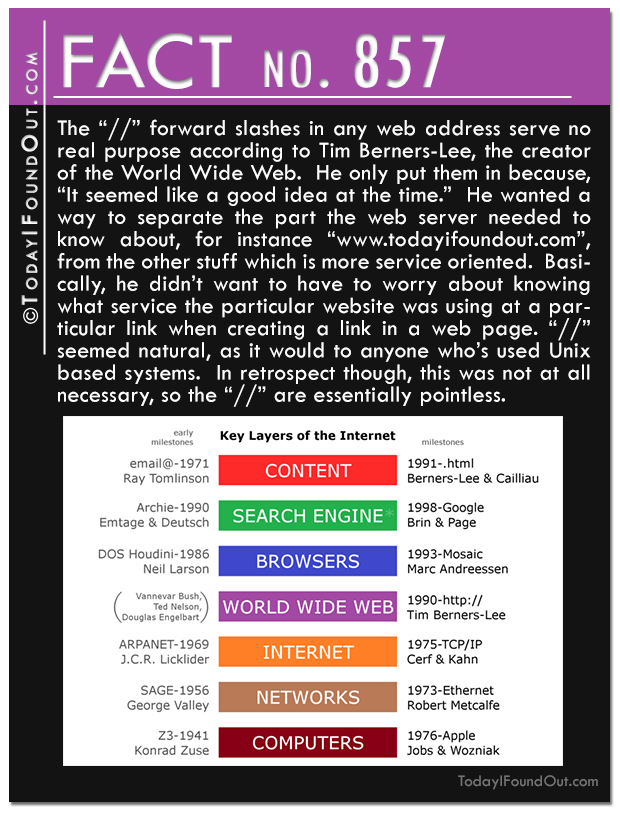 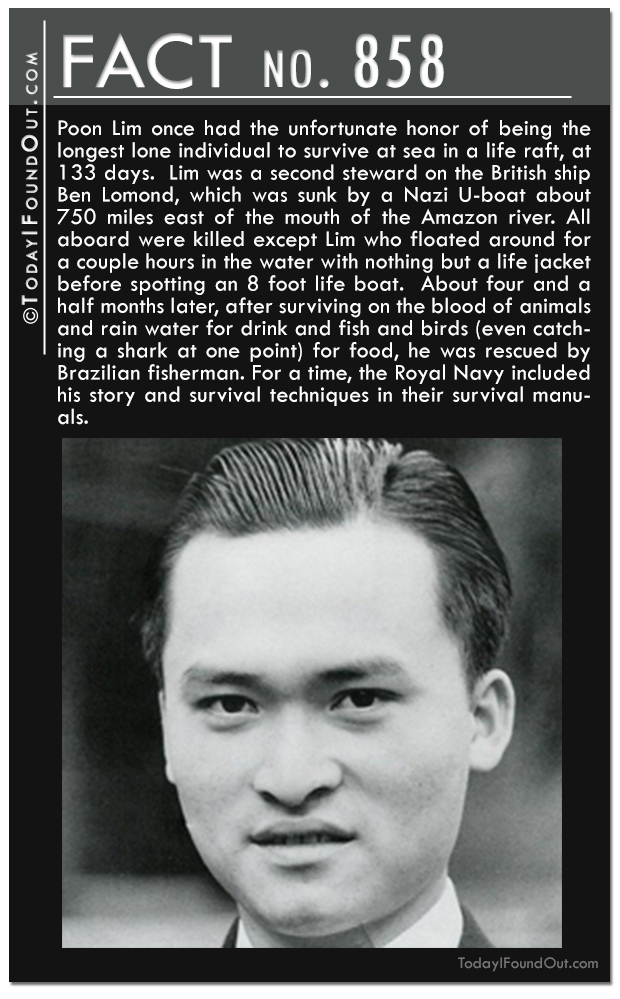 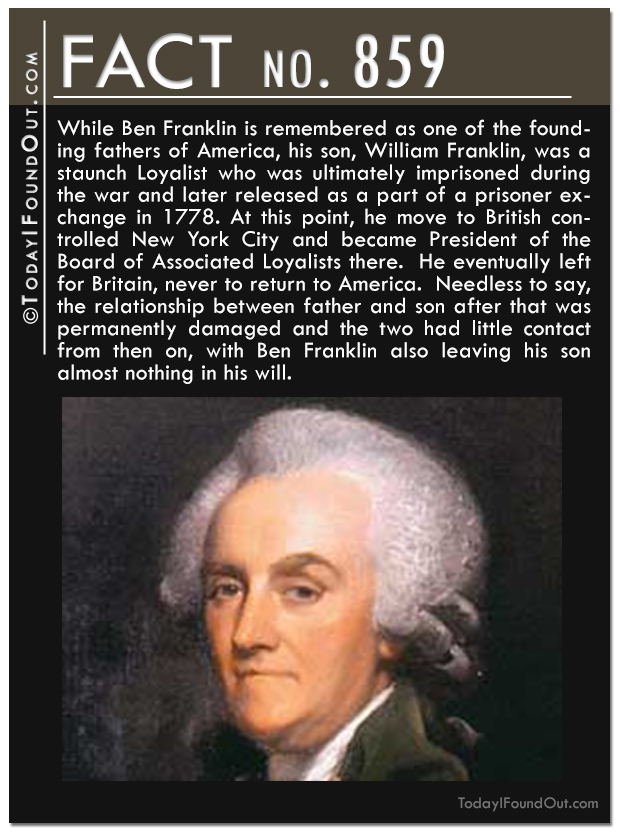 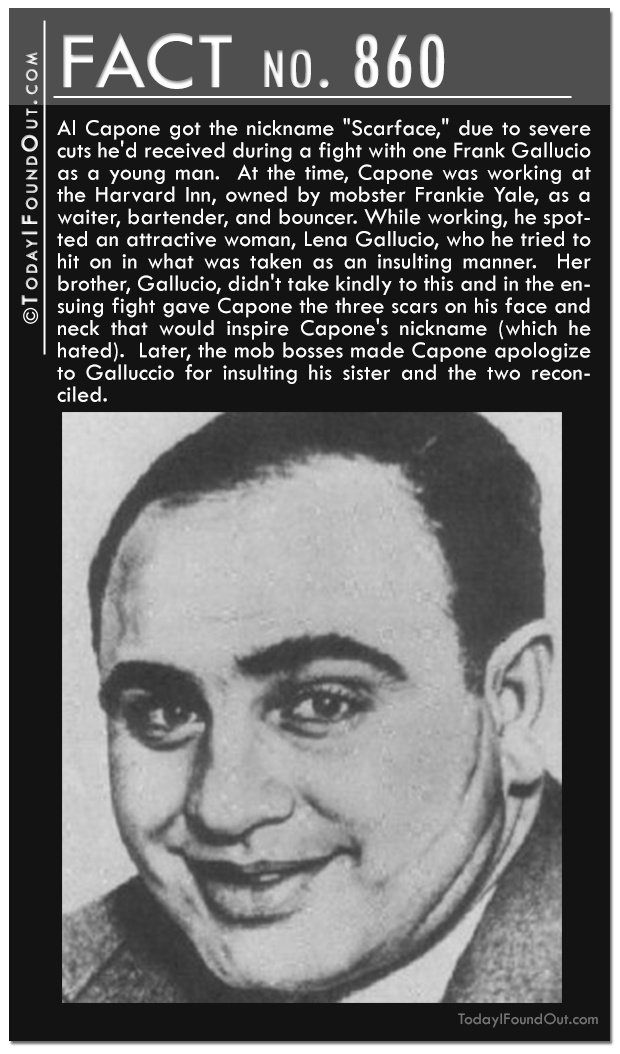 Quick Fact 851: On March 13, 1962, the chairman of the U.S. Joint Chiefs of Staff, General Lyman Lemnitzer, submitted a proposal to the Secretary of Defense, Robert McNamara, developed by the Joint Chiefs and the Department of Defense outlining plans to, among other things, commit various acts of terrorism on U.S. soil and then frame the Cubans for it in order to provide an excuse to go to war with Cuba.  In the end, when the plan was presented to President Kennedy for final approval, he rejected it and was reportedly furious over the matter. General Lemnitzer was shortly thereafter let go as the Chairman of the Joint Chiefs.  However, Kennedy’s rejection of this proposal, and others like it, ultimately led to him becoming increasingly unpopular with the military brass.

Quick Fact 852: Certain types of horned lizards are also able to squirt a directed stream of their own blood from the corners of their eyes at predators as much as 5 feet away. They accomplish this squirting action via severely restricting blood flow away from their heads, with the resulting increase in blood pressure in their heads bursting certain vessels near their eyes where the blood squirts from. What purpose does diminishing their own blood supply while giving the predator a taste serve?  Well, it turns out to certain animals, such as cats and dogs, horned lizard blood tastes awful due to certain compounds present in their blood.

Quick Fact 853: While there are instances of thesauri going all the way back to Philo of Byblos in the first century, the first modern thesaurus was created by Peter Mark Roget, which he began compiling in 1805 at the age of 26, and finally published the work in 1852. Roget also invented the log log slide rule in 1815 (allowing for simple exponential and root calculations) and helped found the organization that would become the Royal Society of Medicine, as well as played a key role in the founding of the University of London and the Society for the Diffusion of Useful Knowledge (an organization dedicated to producing inexpensive books on scientific and other educational topics to make them accessible to working class individuals).

Quick Fact 855: On the morning of April 26, 1982, South Korean police officer Woo Bum-kon found himself being woken up by his girlfriend, Chun Mal-soon, who was swatting a fly on his chest.  This resulted in the couple getting in a huge fight before he left for work.  When he got home, he beat his girlfriend, then went on one of the deadliest rampages by any lone gunmen in history.  Within 24 hours of the fight, he’d gone around in his police uniform, often using it to gain people’s trust before murdering them, killing 56 people and seriously wounded another 35 before he was cornered in a house (with hostages) where he used two hand grenades to blow himself up. The explosions also killed three of the hostages in the process.

Quick Fact 856: In Ancient Rome, if you wanted to commit suicide and you weren’t a soldier, a slave, or someone accused of a capital crime, you could simply apply to the Senate for the right to kill yourself.  If the Senate did not object, you would then be given hemlock to end your life with.

Quick Fact 857: The “//” forward slashes in any web address serve no real purpose according to Tim Berners-Lee, the creator of the World Wide Web.  He only put them in because, “It seemed like a good idea at the time.”  He wanted a way to separate the part the web server needed to know about, for instance “www.todayifoundout.com”, from the other stuff which is more service oriented.  Basically, he didn’t want to have to worry about knowing what service the particular website was using at a particular link when creating a link in a web page. “//” seemed natural, as it would to anyone who’s used Unix based systems.  In retrospect though, this was not at all necessary, so the “//” are essentially pointless.

Quick Fact 858: Poon Lim once had the unfortunate honor of being the longest lone individual to survive at sea in a life raft, at 133 days.  Lim was a second steward on the British ship Ben Lomond, which was sunk by a Nazi U-boat about 750 miles east of the mouth of the Amazon river. All aboard were killed except Lim who floated around for a couple hours in the water with nothing but a life jacket before spotting an 8 foot life boat.  About four and a half months later, after surviving on the blood of animals and rain water for drink and fish and birds (even catching a shark at one point) for food, he was rescued by Brazilian fisherman. For a time, the Royal Navy included his story and survival techniques in their survival manuals.

Quick Fact 859: While Ben Franklin is remembered as one of the founding fathers of America, his son, William Franklin, was a staunch Loyalist who was ultimately imprisoned during the war and later released as a part of a prisoner exchange in 1778. At this point, he move to British controlled New York City and became President of the Board of Associated Loyalists there.  He eventually left for Britain, never to return to America.  Needless to say, the relationship between father and son after that was permanently damaged and the two had little contact from then on, with Ben Franklin also leaving his son almost nothing in his will.

Quick Fact 860: Al Capone got the nickname “Scarface,” due to severe cuts he’d received during a fight with one Frank Gallucio as a young man.  At the time, Capone was working at the Harvard Inn, owned by mobster Frankie Yale, as a waiter, bartender, and bouncer. While working, he spotted an attractive woman, Lena Gallucio, who he tried to hit on in what was taken as an insulting manner.  Her brother, Gallucio, didn’t take kindly to this and in the ensuing fight gave Capone the three scars on his face and neck that would inspire Capone’s nickname (which he hated).  Later, the mob bosses made Capone apologize to Galluccio for insulting his sister and the two reconciled.