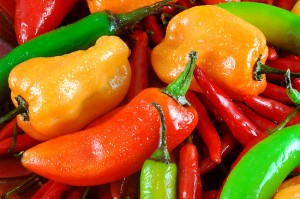 Today I found out why peppers taste hot.

The heat sensation is caused by capsaicin, which is a colorless, odorless, oily chemical found in peppers.  Capsaicin binds with certain sensory neurons which then more or less trick your body into thinking that it is being burned or at least experiencing excessive amounts of heat in the area that the capsaicin comes in contact with, even though no actual physical burning is taking place.

(Warning, Extreme Nerdery Ahead) Specifically, what is going on is that the capsaicin is binding to the vanilloid receptor (VR1), which is a member of the superfamily TRP ion channel and thus is referred to as TRPV1;  by binding to the VR1 receptor, the capsaicin molecule will produce the same sensation, or signal to the brain, that normal heat will produce when activating the TRP receptors.  This is why eating peppers makes your mouth feel really hot, even though it’s not. (End Extreme Nerdery) 😉

Interestingly, in extreme cases where exposure to capsaicin is high, such as in pure capsaicin extract, the sensation can be so “hot” that the body will be tricked into inflaming itself; so it would appear as if you are actually burned, even though the capsaicin doesn’t actually burn you at all, just tricks your brain into thinking it’s being burned. (Queue Matrix: Your mind makes it real.)

Capsaicin is not just a substance that makes your food extra tasty, it is also used in “pepper spray”, hence the name.  Anytime relatively undiluted capsaicin comes in contact with your skin, particularly your eyes or breathed into your lungs, it will cause you to feel like you are being burned, even though you aren’t.  So it makes a very effective deterrent without actually causing any real damage to the person being sprayed; or rather I should say causes no real damage if it’s not too strong a level of capsaicin as noted later.

There is even a scale for measuring hotness as a function of a chili pepper, the “Scoville Organoleptic Test”. This scale was developed by chemist Wilbur Scoville.  The hotness is measured in multiples of 100 units, referring to how much sugar-water was needed to dilute the pepper to the point where your brain is no longer tricked into thinking you are being burned.

Here are some examples of hotness levels on the Scoville scale:

*Warning: before you get all gung-ho to go out and purchase law enforcement grade pepper spray, “bear” mace, or really potent “regular” pepper spray for defense purposes, you should know that spraying that directly in someone’s eyes at close range is likely to cause permanent damage and in a lot of cases means you will be in as much trouble as your attacker if it can’t be shown they were actually trying to physically harm you.  The low end stuff will tend to be just as effective in terms of deterring attack, but without the nasty probable permanent damage if sprayed directly in the eyes; so for self defense against humans, getting too strong of stuff can be a bad thing unless you are a police officer, then you can do what you want.  Also, never spray “bear” mace against even a slight breeze, I can’t stress that enough. *looks at my brothers*

One of the animals that capsaicin has no effect on is birds.  Birds also can’t really chew the seeds. Thus, when the birds eat the fruit and then pass the seeds through their digestive tracks, they deposit them all over the place.  Interestingly, humans are one of the only “animals” that eat peppers that actually do tend to destroy the seeds through mashing them with our teeth.  Almost all other animals/fungi/bugs that would destroy the seeds are more or less repelled by the capsaicin.

Capsaicin also has some nice medicinal properties to it as an anti fungal and anti-microbial agent.  In addition, due to the capsaicin tricking the brain into thinking your mouth is being burned when you eat it, your brain will release endorphins thus producing a sense of well being.   Also in response to being “burned”, your brain will boost your metabolism, among other things.

Ironically capsaicin is also currently used as a pain reliever, such as in cream for arthritis suffers with about a .05% level of capsaicin in the cream.  How they do this is they first numb the skin, then apply the cream and wait for the patient to start feeling the heat; they then remove the cream.  This method is very effective in reducing joint and other arthritic pains.  Indeed, capsaicin is the primary ingredient in the drug “Adlea”, which is a very long acting drug to treat post surgical and arthritic pain.  A single injection of Adlea to the site of the pain will reduce pain for up to a few months in the area injected.

Recently it has also been found that capsaicin is able to kill prostate cancer cells.  In the study, the tumors that were treated with capsaicin ended up shrinking to about 1/5 the size of the tumors that were not in the control group.  Capsaicin also has been shown to inhibit the growth of Leukemic cells.  In yet another study, it has been shown to be effective in triggering Apoptosis in lung cancer cells, which is the process of programmed cell death.