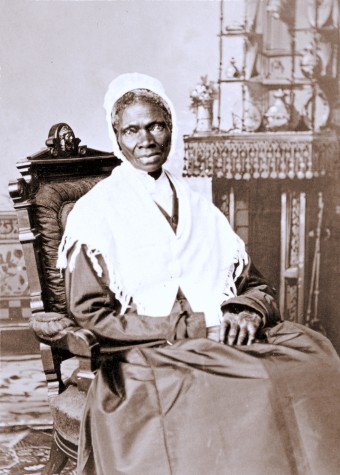 Sojourner Truth, abolitionist, orator, and women’s rights activist, delivered a ground-breaking speech on May 29, 1851, one of the first and most memorable of the fledgling suffragist movement. An emancipated slave, Sojourner believed the wrongs committed against both blacks and women by the US were “inextricably intertwined.” She never learned to read or write, but that didn’t stop her from spreading her message.

Sojourner believed God did not condone the cruel treatment of women. She fought tirelessly for women’s rights, reasoning, “Was not Christ born of a woman?” She answered her own question with “Through God who created him and woman who bore him. Man, where is your part?”

Additionally, Sojourner Truth had firsthand experience with the inherent evil of slavery, and believed God had called her to crusade against it. She said, “The lord has made me a sign unto this nation, an’ I go round a-testifyin’, an’ showin’ on ’em their sins agin my people.”

On May 29, 1851 during the Women’s Rights Convention in Akron, Ohio Sojourner Truth delivered her famous “Ain’t I A Woman?” speech (though some accounts of the speech say she never said “ain’t I a woman” even once. Historians are sill bickering about it. Elizabeth Cady Stanton quoted her as saying it, so we’ll go with that. )

Speaking in a matter of fact tone, Sojourner Truth addressed the audience.

The message was clear. Women are just as smart, strong, capable and courageous as men. Her words made quite an impact on her listeners, as the Anti-Slavery Bugle attests:

One of the most unique and interesting speeches of the convention was made by Sojourner’s Truth, an emancipated slave. It is impossible to transfer it to paper, or convey any adequate idea of the effect it produced upon the audience. Those only can appreciate it who saw her powerful form, her whole-souled, earnest gesture, and listened to her strong and truthful tones.

After the convention, Sojourner encouraged black men to fight for the Union cause during the Civil War, and helped emancipated slaves adjust to freedom. She lobbied against segregation and denounced racism (“It is hard for the old slaveholding spirit to die, but die it must”).

Sojourner Truth died of old age in 1883. Her funeral and burial in Battle Creek, Michigan had the largest attendance ever seen in the town, a testament to a true American treasure.