This Day in History: August 25th 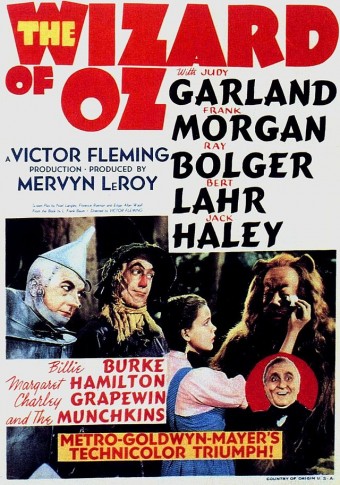 On August 25, 1939, 75 years ago today, one of the best-known and most-loved films in cinematic history was released in movie theaters across the country. Far from being a huge box office smash from the get-go, The Wizard of Oz took its sweet time to reach the heights of popularity and profitability it would eventually attain.

The movie was based on the 1900 novel The Wonderful Wizard of Oz by L. Frank Baum.

The film tells the tale of a young Kansas farm girl named Dorothy who, after being knocked unconscious during a tornado, is transported with her dog Toto to a strange yet beautiful place. She makes an enemy of an evil witch right off the bat (Dorothy’s tornado-flung house landed on her sister and killed her, hardly an unreasonable reason to dislike someone in my opinion, but I digress.) Luckily, Dorothy also wins the friendship of a good witch who hooks her up with a pair of magical ruby slippers.

Glinda the Good Witch tells her that to find out how to get back to Kansas she must follow the yellow brick road and find the Wizard of Oz. Along the way she meets several interesting yet neurotic companions – the Scarecrow, the Tin Man and the Cowardly Lion. They have all sorts of adventures and harrowing run-ins with that pesky evil witch who desperately covets those ruby slippers. Dorothy accidentally throws some water on the old hag which surprisingly melts her. Who knew it would be so easy to bump off her nemesis?

They finally make it to the Emerald City only to find that the Wizard is a con artist and that Dorothy always had the ability to return to Kansas by clicking her damn heels together and saying “there’s no place like home.” Now, I admire her restraint, because if most people suffered through those many needless traumas assault charges would have been filed.  If nothing else, this should have made Dorothy rethink the whole “good witch” thing.

The film was a treat for the eyes as it was shot in Technicolor – a fairly new film process that made all the wonderful sets and costumes in the movie pop from the screen. The Wizard of Oz may have lost the Oscar for Best Picture to Gone With The Wind, but the movie won a Best Song Oscar for the beautiful and melancholy “Over the Rainbow,” which became forever associated with Judy Garland for the rest of her career.

The Wizard of Oz was televised for the first time in 1956, and that’s when the real popularity of the movie began to grow. 45 million people gathered in front of their televisions to watch that first broadcast, and it became a family tradition for many to watch the movie together every year.

Whether you’re a little kid, or watching with the kids, or synching it up with “Dark Side of the Moon,” The Wizard of Oz has something for everyone. And, no matter where you are at in the life cycle, the flying monkeys never cease to be cool.